Thor: Ragnarok is in theaters this week, and the movie looks a treat, full of Hulks and gods and laughs and action. Mostly, it looks … big.

But no matter how big this film may be, it can’t be bigger than this Thor story from thirty years ago …

Welcome to the Dollar Box, where I review comic book treasures with an original cover price of a dollar or less! For this installment I wanted to do something big … and you don’t get much bigger than Thor #380, where every page is a full-page shot!

The year was 1987, and Walt Simonson was nearing the end of his run on Thor. And not just any run — for my money, Simonson’s Thor is in the discussion for the finest comics run of all time. I’ve already enthused about the first issues of Simonson’s era over at Longbox Graveyard (in two parts — ONE, and TWO), but with this issue we are in Simonson’s late innings, and the shadows are beginning to lengthen. Simonson had ceded his pencilling duties to Sal Buscema after issue #368, but like one of his Norse heroes, the master returned to the page for one last epic adventure with the God of Thunder, doubtless feeling some pressure to top the stellar work he had done before. The result was this “all-splash page” issue of Thor, an attempt to tell a big story with the biggest possible images.

And this is a big story. Thor battles the Midgaard Serpent … the mythological, world-girdling wyrm destined to slay Thor at the end of time. Thor has always been a book heavy with mythological overtones, and never moreso than in Simonson’s run. When Thor takes to the field of battle against the Serpent, it is with the full, crushing awareness that this is a battle he cannot win, and that his death at the fangs of the Serpent — followed by the destruction of the Earth that he loves — is his inevitable fate.

But what makes heroes into heroes is how they face their doom, and defy the fates, and that is what we have in Thor #380. Weakened by Hela’s curse, and sustained only by his magic armor and the power of his mighty hammer, Mjolner, Thor faces long odds in this battle. The Serpent is well aware of Thor’s sudden mortality, and also knows that this strange circumstance may free him of the doom that binds him to Thor — if he can kill this godling now, weakened as he is, then he might re-write his own fate. After all, he, too, is destined to die on the last day in battle with Thor. 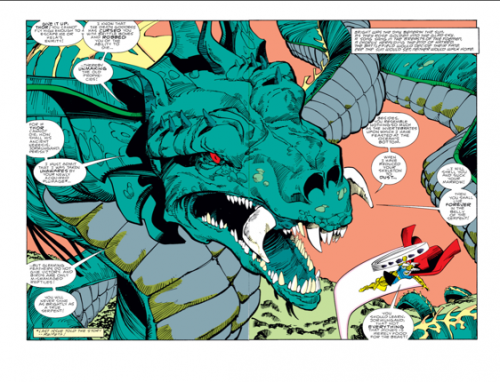 Big stakes, big pictures, and big storytelling, and it works (mostly), not so much as a stand-alone issue, but as a victory lap for the end of Simonson’s long run on this title. Telling a story in this format is epic, but not ideal. A comic story needs images of differing sizes to operate at best efficiency. When all panels are the same size, they are afforded equivalent visual weight, working against the emotional pace of a story. The absence of conventional panel structure is especially acute when showing rapid action, such as when Thor is swallowed by the Serpent, then bashes his way back out through the monster’s teeth, a sequence better suited to two panels than two pages. But as a once-in-a-lifetime event — and especially as a punctuation mark for Simonson’s stellar run — it is fun to see storytelling on this epic scale.

There’s that word again — epic. “Mjolner’s Song” is epic in more ways than one. Tying the whole thing together is an “epic” in a literal sense. Storytelling captions narrate Thor’s battle the way some skald might tell it in the mead hall. These captions serve to heighten the mythological import of the conflict, while at the same time offering juxtaposition for the dialogue of our combatants, who can be charmingly flippant at times.

In the end this is a confident and fearless issue that echoes the confident and fearless approach Simonson took to his run on Thor. Throughout his time on the book, Simonson boldly reinvented the rich legacy of the stories and characters that had come before, and embraced the magical weirdness of his subject matter — Simonson confidently and unapologetically gave us talking serpents and heroes who were simultaneously bound by their fates yet also self-aware enough to note that they have an infinite capacity for stupidity!

In the end, it is that “capacity for stupidity” that may provide the most important secret sauce of all for these kinds of broad-shouldered, super-heroic tales. Simonson was a master at telling Silver Age stories in a modern style. He kept what worked of all that had come before, ignored what didn’t, and cheerfully reinvented comic book storytelling, leaving us work that still resonates three decades later. Since these stories were printed, Thor has gone on to become a major movie property (thanks in no small part to the foundation Simonson laid down during his tenure), but even the finest effects Hollywood can muster can’t lay a finger on the battle Simonson gives us here.

It’s big, it’s loud, it’s fun, and it may even be infinitely stupid … but it is also an example of what comics do better than in any other form of fiction. In the end, it is tales like “Mjolner’s Song” that keep us reading and collecting this unique art form. This issue is well worth tracking down, either in original form, in one of Marvel’s many reprints, or online (in it’s entirety) thanks to my fellow blogging pal, Mars Will Send No More!

This column originally appeared at Stash My Comics.

Posted in The Dollar Box