The Invaders stage a rescue mission from the Warsaw Ghetto … which is pretty damn grim. Why rescue just one guy? It’s a fine line they walk, in these World War 2 comics, especially if the book itself cites the existence of concentration camps. I expect there is an in-continuity reason why the superheroes don’t put paid to Hitler straight-away. Over in All-Star Squadron I seem to remember something about the Spear of Destiny seizing control of any hero who came too close to it. But still.

This issue also introduces Spitfire, the daughter of Union Jack, who gained her super-speed powers by a transfusion of the Human Torch’s blood. The Torch is sweet on her, but Spitfire only has eyes for Captain America. It is ever thus. Bonus points for a Holy Hannah.

With Solo: A Star Wars Story arriving in theaters this week, I thought I’d bump Star Wars #1 to the top of my reading pile for this special, mid-week entry of Marvel 1977. Alas, Han Solo himself doesn’t appear in this issue, ending as it does before Luke even gets to Mos Eisley, but if the rumors are to be believed, Han Solo is missing from his own movie, too! So there you go!

As a young super-geek, Star Wars was on my radar well before the movie debuted, and I bought the first four issues of the Marvel Comics series off the rack and set them aside without reading them, saving those spoilers for the movie theater. (I never even saw issues #5 and #6 … once the movie came out, anything with “Star Wars” on the cover sold out in seconds). This comics adaptation is wordy and a little rough to look at, but it is still classic Star Wars and that makes it fun. I remember being a little let down with the comics when I snuck a peek before seeing the movie (of course I snuck a peek!), but all these years later, with the story so familiar and the actor’s voices ringing in my ears, this comic is a nice nostalgic time machine for a galaxy far, far away. 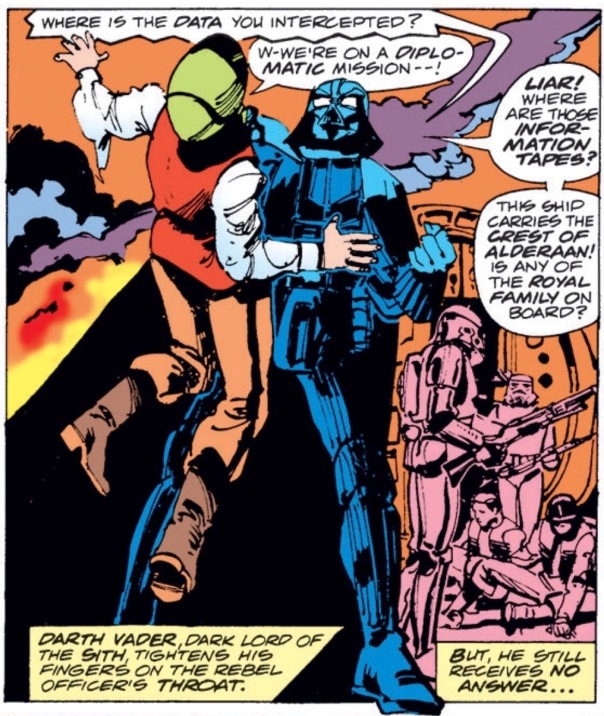 The book is remarkably faithful to the film, especially when you consider it was written and drawn well before the movie took its final form. For dedicated fans, half the fun is in spotting the little inconsistencies — like Droids being referred to as “robots,” or that bizarre green Darth Vader helmet on the front cover. I particularly enjoyed Luke’s conversation with his planet-side pal Biggs, something hinted at in the movie but missing from the final cut. 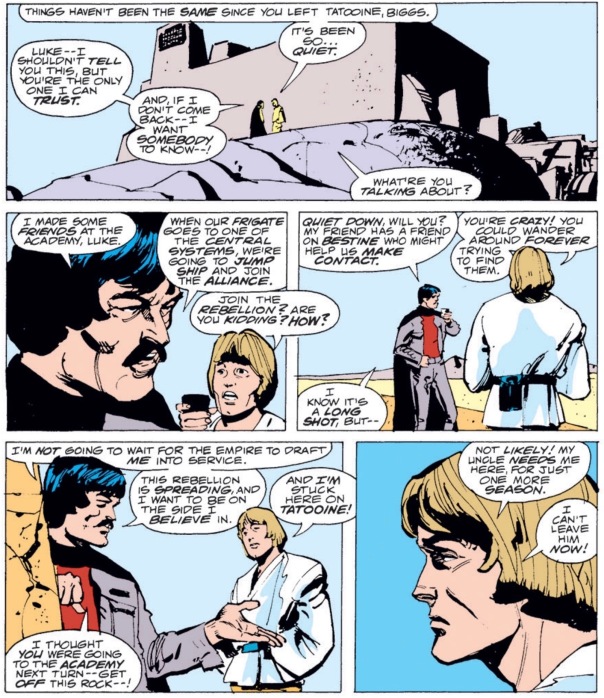 A goofy and wonderful tangle of story from Roy Thomas, with spectacular art by George Perez, pretty much at the top of his game for Marvel. It’s all wrapped up in the bizarre continuity of counter-earth, where there is a Reed Richards who doesn’t stretch and who is a maniac — and also The Brute! (Jonathan Hickman was only five when this came out, so you can’t blame him). The Fantasic Four have been captured by the Frightful Four, and they’re all strapped to a crazy-looking windmill while the bad guys — led by Reed Richards’ double, who is in his underwear and smoking a pipe — decide what to do with them! Smash ‘em? Hold ‘em for ransom? Hey, why not both?

Cool action in the back half of the book, when the FF inevitably break loose and kick butt. Thundra and Tigra are here, too, because why not? The “Four” in Fantastic Four was always advisory, not a hard and fast rule. The good guys win and the evil Reed is ejected into the Negative Zone, but our good Reed can never stretch again. BUT WAIT, IT IS ALL A PLOY … it is the GOOD Reed that got shot into another dimension, while the evil version has pulled the wool over everyone’s eyes. Why wasn’t I reading this book in 1977? It’s a gas!