Not a great book by any stretch, but Red Sonja is Conan-adjacent, and it isn’t much of a stretch to imagine how Frank Thorne’s interpretation might appeal to an adolescent boy. 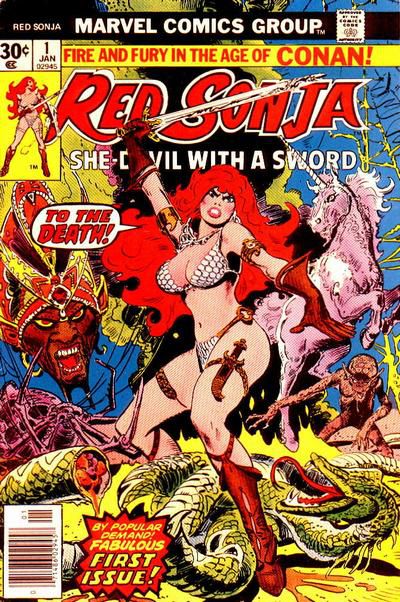 (I also read the recent Dynamite Red Sonja strip but don’t much remember it, sadly).

Help me build a reading list for the letter, “R!” Give me your ideas in the comments section, below!

The Song of Red Sonja

Welcome to The Dollar Box, where I look at comics with an original cover price of a dollar or less. This time we travel back to the dim pre-history of Robert E. Howard’s Hyborian Age — and the even more remote year of 1973 — for a date with a certain she-devil with a sword in issue #24 of Conan the Barbarian!

It’s The Song of Red Sonja!

Two-and-a-half years into its run, Marvel’s Conan the Barbarian had survived an early flirtation with cancellation to become an accidental masterpiece. Sales were up, awards were rolling in, and the book had been promoted to monthly status. Ably guided by writer Roy Thomas and a brilliant young artist by the name of Barry Windsor-Smith, Conan had broken through to become one of Marvel’s most popular comics.

Unfortunately, Conan was about to become a casualty of its own success. The switch to monthly publication hastened Windsor-Smith’s departure from the book. Already feeling overworked and under-paid — and recognizing that the agonizing level of detail that he packed into each page could never survive a monthly schedule — Windsor-Smith would end his signature run on Conan with this very issue.

But what an issue it was — the Song of Red Sonja might be the finest single issue in the classic Thomas/Windsor-Smith run on Conan the Barbarian.

Following as he did Robert E. Howard’s Conan chronology, Roy Thomas knew he was years away from being able to bring the great loves of Conan’s life — Valeria and Belit — into the book, but he still wanted a strong female character for the series. Inspiration struck when Thomas learned of a non-Conan story from Robert E. Howard that featured a character named “Red Sonya of Rogatine.” Working from that tale, Thomas and Windsor-Smith constructed issue #23’s “Shadow of the Vulture,” an entertaining issue notable for featuring the first appearance of the subtly-renamed Red Sonja, introduced as a mercenary soldier fighting to defend the besieged city of Makkalet.

But it would be in issue #24’s “Song of Red Sonja” that the character would steal our Hyborian hearts.

This story is remarkable in that it is so un-remarkable. It is bolted together from a series of familiar Conan scenes. There’s a tavern fight, a tall tower to climb, riches that are stolen (and that just as rapidly slip through Conan’s fingers), and of course a giant snake to slay. All in a night’s work for our favorite Cimmerian! What makes the story memorable is Sonja, a rogue of a different sort, an otherworldly beauty who is nearly Conan’s equal with a sword, and clearly a couple laps ahead when it comes to brains.

Later Red Sonja stories would make much of Sonja’s vow of chastity — and at the end of this story she does declare that no man may kiss her unless he first defeated her in battle — but in this tale Sonja seems to honor that commitment only when convenient. Distinct from the somewhat dour Red Sonja on display in her later Marvel solo series, this Sonja is full of life, dancing with abandon on a tavern table, enjoying a moonlight swim with Conan, and teasing the barbarian with her feminine whiles.

Sonja, it turns out, is leading our hero on, needing his legendary Cimmerian climbing prowess to help her scale a treasure tower, but there is still enough heat in her exchange with Conan that it doesn’t seem entirely a manipulation or a relationship of convenience. Sonja genuinely likes Conan — it’s just that she likes riches more, and when push comes to shove Sonja takes what she wants and leaves Conan in the dust, leaving the barbarian to express his frustration with a rare ending where he didn’t get the girl by slamming his fist into a wall.

The thing about Sonja — what drives this story, and makes it so memorable and fun — is that we want her to get the best of our hero. The reader can see what is coming for Conan a mile away, and the only reason Conan can’t is because he’s thinking with his loins … and because he is a barbarian, as-yet unaccustomed to civilized ways. Having your main character fail at something so mundane as trying to get the girl is a great way to humanize him, and also to point up Conan’s own simple innocence and purity of spirit — something difficult to do with a larger-than-life hero splitting skulls like melons. Conan is a legendary character, even in this youthful phase of his career, and seeing him come up second best to anyone is a rare and memorable event.

Windsor-Smith’s Sonja is a delicate-boned creature, as are nearly all of his characters. Wearing a mail shirt and short pants that show plenty of leg (Sonja’s famous “chainmail bikini” would not appear until later) Sonja is clearly objectified, but she is not a sex object. The character is too self-assured and confident to be lumped in with the dancing girls and dissolute princesses of Conan’s world. Red Sonja is the hero of her own epic, and in her world it is Conan who is just passing through.

Conan and Red Sonja would meet again, but the sparks would never quite fly so well as in this early story, which sported a cover price of fifteen cents back in the day, but which you’d be fortunate to find for less than sixty bucks today. The story is also available in Volume 4 of Dark Horse Comics’ excellent Chronicles of Conan reprint series, which may be the superior means of enjoying this story, as the more modern print technology employed by that series makes it more possible to enjoy Windsor-Smiths manic attention to detail in his art than was the case in the original printings.

Whatever the price or the form, it is well worth spending an evening with Conan the Barbarian #24  — it is a magical thing that it still feels so fresh and adventurous all these decades later, depending as it does on cliches and telegraphing an ending that only Conan couldn’t see coming. Sometimes the simplest tales are the best tales — especially when it comes to primal genres like sword and sorcery — and in the “Song of Red Sonja,” Roy Thomas and Barry Windsor-Smith (following in the tradition of Robert E. Howard) crafted a jewel richer than any of the treasure in that serpent haunted tower our two heroes raid. Like all the best tales, we’ve seen this all before, but we can’t wait to see it again.

This article originally appeared at StashMyComics.com!

NEXT MONTH: #140 Sincerely, The Sandman!

Posted in The Dollar Box

Read my column about Red Sonja!