A long time ago and in a galaxy far, far away, there was a space opera adventure full of thrilling daring-do, with larger-than life villains and swashbuckling heroes battling across the cosmos to determine the fate of a stellar empire. In the bad old days of 1979, I went mad tracking down every film, book, and comic I could find about that fantastic new universe.

Micronauts … was not that universe, but it did help feed the hungry wolf of my under-served Star Wars obsession. Now, decades later, Star Wars is thoroughly over-served, and it is Micronauts that intrigues me. Micronauts was the Little Space Opera That Could, a licensed book that punched far above its weight and was a much better read that it had any reason to be.

Micronauts is the kind of book that’s right in my wheelhouse for Longbox Graveyard. I have fond memories of the book, I own a pile of issues, and they’re of no particular worth to anyone but me. But unlike many books in my Accumulation, something about this series fired my imagination — when I found them in the Longbox Graveyard, it was, “Oh, cool!” and not, “Oh, no!”

That nostalgia was amply rewarded, for the first dozen issues or so.

I admire Bill Mantlo and Michael Golden for bringing their A-game to what could have been a desultory, marketing-driven comic adaptation of an obscure Japanese toy series. The book had no shortage of enthusiasm, and while Micronauts wasn’t quite the minor space opera classic I remembered, it was still a fun read.

Micronauts followed the adventures of a rag-tag group of rebels fighting to free their homeworld from the villainous Baron Karza, who ruled through terror and evil science. The series had robots, aliens, spaceships, mysticism, a little romance, and a surprising amount of violence. The big reveal was when these heroes escaped to our world from the “microverse” and turned out to be the size of toys …

… and that’s where the series struggled. When Micronauts was two-fisted sci-fi pulp with Body Banks and Dog Soldiers, I was all in. But when our heroes were menaced, Land of the Giants-style, by giant puppies, well …

In 1979, though, I thought the book was awesome, dude! I was seventeen and buying comics with my own money. I had a job and would soon be dropping out of school. (Yeah, comics taught me well.) My mind was open and hungry for adventure. Star Wars was still cool and I was young enough to embrace space opera tropes.

I fell in love with Micronauts from the very first page.

I still love that page.

Pretty much everything I wanted was here. Ray guns, princesses, aliens, spaceships. And that juxtaposition of horses and science fiction! Micronauts promised a sword & planet adventure in the tradition of John Carter of Mars. Everything here had been done better by George Lucas (and Jack Kirby did it better than all of them), but starved as I was for space opera in those pre-home video days, this book didn’t have to be Mr. Right. It was enough to be Mr. Right Now.

And it got many things right.

That first issue, especially, was magic stuff, sweeping us up in a world of familiar surprises, peopled by unabashed Star Wars archetypes mixed up in a galactic rebellion tinged with undertones of eugenics and religious fundamentalism. The villains sneered, the heroes acted heroic, and everything moved at a breakneck pace. It was a breathless thrill ride that also marked the high point of the series. 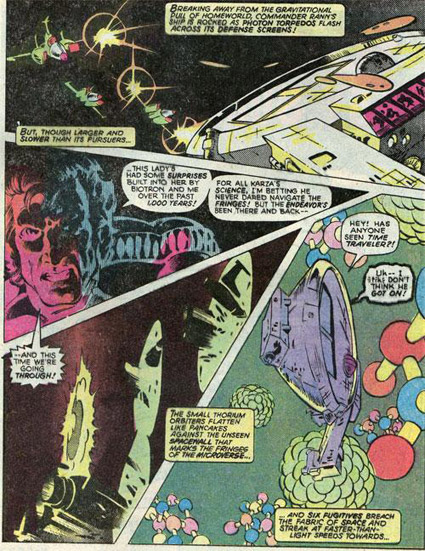 (And you can read issue #1 in it’s entirety over at Mars Will Send No More!)

Marvel had a long tradition of mixing cosmic superheroes with mundane, earth-based adventure, but I thought Micronauts lost it’s mojo when hammered into the same world as the X-Men. It was the Microverse I wanted to explore — not Florida! But I gather “pure” science-fiction books were the kiss of death, sales-wise, in those pre-direct market days, and so Micronauts saw its sometimes-compelling space opera derailed, time and again, by weak “toys in peril” stories that only served to diminish the book.

Michael Golden’s career was just getting started with this book, but his unique style still set him apart from most everything else Marvel was publishing in 1979. His work was fresh, clean, and imaginative. Golden’s pencils could be primitive in places but were so full of joy and motion that they were impossible to resist, particularly when inked by pro’s pro Joe Rubinstein.

The writing was no better or worse than most Marvel comics of the era, and Bill Mantlo got extra points for godfathering the series — without him, we wouldn’t have Micronauts at all. But the series was very much a product of its age. Mantlo’s scripts were enthusiastic and his plots were imaginative, but his dialogue was expository and his grim-toned captions got tiresome. A few bravura flourishes stood out — like when our characters (and their word balloons) went tumbling and had to be be read upside-down — but for the most part, this was straight-forward Marvel-style storytelling.

The characters were a mixed bag. What at the time seemed inspired by Star Wars today reads as third-rate Star Wars (which by my math makes it twice as good as Phantom Menace).

Commander Rann was a stiff, make no mistake, a knock-off of Vance Astro from the original Guardians of the Galaxy (!), and Princess Mari and the robots were little better. All these years later I did still like Bug and Acroyear — they’re one-note characters, but it’s a good note. (Pretty much alone of this crew, Bug would escape the series to a continuing role in the Marvel Universe). Among the bad guys, Baron Karza was properly operatic, seeking to rule an entire universe (microverse!) through the promise of eternal life. Sure, Karza was a bargain basement Darth Vader … but it was weird and wonderful beyond measure when Karza changed shape and stomped around as black armored centaur. (Try to answer that, Anakin!) 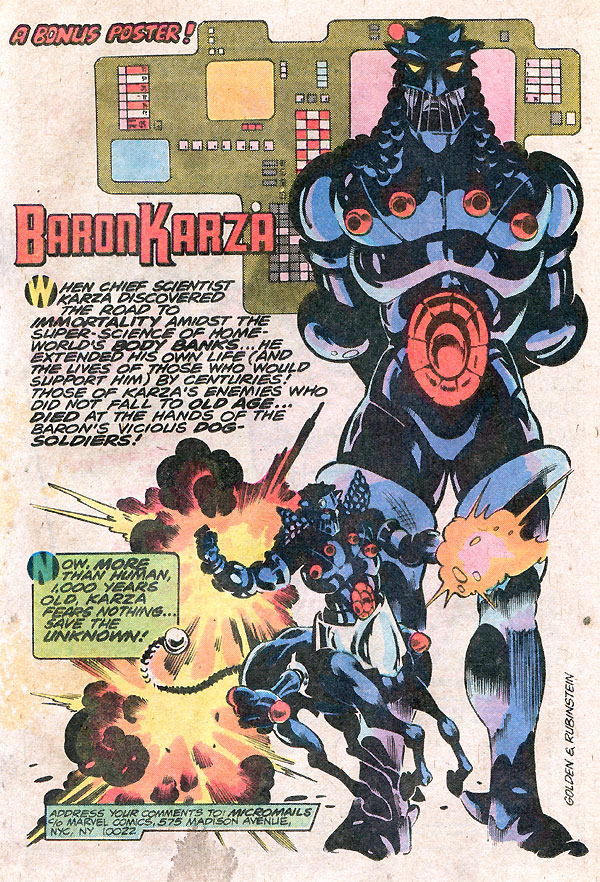 In 1979, this book was my monthly ticket to a space opera world that excited my sensibilities. Reading Micronauts in 1979 felt like you were part of secret club. It was easy to imagine that regular comics readers were dismissive of Micronauts because of it’s toy license premise, and to feel like you had discovered some unique little jewel.

Maybe no one was watching closely. Maybe no one had any expectations at all. And maybe because of that, Micronauts felt like a book where anything could happen. That’s the paradox of Micronauts — with its stock characters and space opera cliches it managed to feel like one of the freshest books of its time. Imaginative, adventurous, and fun, it was the first book I took off my reading stack, and with every glimpse of the world and characters I wanted to know more, go there, be a part of this crazy thing (at least until those damn toys came to Earth). Micronauts may have been a joke … but no one told Micronauts. It pushed past parody, past pastiche. This book just went out and had fun each month and didn’t worry what might happen next.

Decades later, I can’t mount much defense for this book. From the imaginative explosion of that first issue, things spiraled down quickly. Our heroes came to Earth, discovered they were toy-sized, fought dogs and cats and Man-Thing (Man-Thing??). The series picked up a bit when it returned to the Microverse and the rebellion against Baron Karza got rolling, and the first year of the series did come to an appropriately apocalyptic conclusion, with space fleet battles, living planets, fratricide, and wholesale slaughter of prisoners. But really, this was a pretty ridiculous book, and if it wasn’t freighted with nostalgia I wouldn’t have made it through re-reading the first dozen issues.

It’s too bad I didn’t like these books more, but not every Longbox pulled from the Graveyard is filled with rubies. I doubt I’ll read Micronauts again, but I still rescued, bagged, and boarded the first dozen issues. That’s as far as Michael Golden went with the book, and that seemed a good place to step off.

Those issues are probably in their bags to stay.

But I’d regret selling off my Micronauts. So stay they will.

NEXT WEEK: #3 The Accumulation