Business travel put a dent in my movie watching this past month. Such a hardship, having to go to London and San Francisco!

Once you are done weeping for my First World Problem, let me know what you think of the movies screened over the last thirty days at Longbox Graveyard HQ!

King Arthur: Legend of the Sword (2017): Gadzooks, what crap! An Arthur film entirely bereft of charm, wonder, romance, and drama. Relentlessly grey palette and deliberate anachronisms in dialogue and wardrobe leaves you pondering just what the hell they were thinking. How is an Arthur picture improved by taking nearly all the shields and armor out of it? Charlie Hunnam is a bag of potatoes, and Jude Law plays an ice sculpture. Aimed for cool at the cost of coherence, and wound up with neither. How can it be that after all these decades the best Arthur pictures remain Monty Python’s farce and the deeply-flawed Excalibur? Sheesh!

The Freshman (1990): Spent a day on the couch riding out my jet lag, saw this was running on cable, and decided some Marlon Brando would suit me fine. It helped that I knew this was a lesser picture — the perfect thing to run in the background while farting around on the web and trying to remember what your home time zone looks like. Brando was big as a house in this one (I love the rumor that in later years he showed up to the set without pants, so they’d only shoot him close), but he brought real warmth to his role as an aging godfather with an entirely unofficial resemblance to Vito Corleone. He had a nice fatherly rapport with Matthew Broderick, too. Pleasant enough to watch what amounted to cute Godfather outtakes but most of the jokes fell flat and the plot about illegally importing endangered animals — with a long and tiresome chase after an escaped Komodo Dragon — was a snore.

On The Waterfront (1954): After The Freshman it was only fair I gave Brando some proper attention. On The Waterfront is one of those universally-acknowledged classics that I’d somehow never seen, so when I woke up at 2:00 AM with an aching back, a head full of swirling work details, and a body that still thought it was on the other side of the Atlantic Ocean, it made perfect sense to stream this one. And Brando was terrific, of course, in this very actorly drama of a palooka caught between his mobbed-up brother and the innocent sister of the mook he helped lead to doom. Even with Karl Malden or Eva Marie Saint on screen, you can’t take your eyes off Brando in this one. I love how he delivered his lines late, like a slightly-addled boxer who needed an extra beat to process. Some nice location work in this one, too. 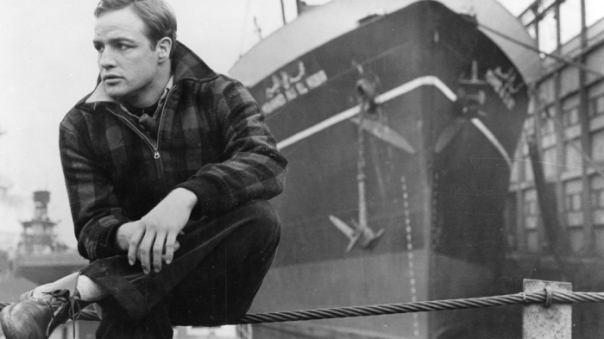 Command Decision (1948): Based on a stage play, this is the kind of didactic, brow-beating World War 2 historical drama that I eat like ice cream, but can’t really recommend. Clark Cable was the hardest of hard asses as the bomber commander willing to accept hideous losses to ensure the Nazis can’t get their jet fighter program off the ground. Fascinating (for me and no one else) to evaluate the arguments made in this picture against the latest thinking about the dubious morality and uncertain efficacy of high-altitude saturation bombing.

Gomorrah (2008): Harrowing and somewhat confusing tale of the mob in Naples. The locations are stark and the violence is sudden and ugly. Multiple stories run in parallel and sometimes intersect — I’d like to watch it again, now that I understand the structure and know where it is going. Full of despair and betrayal.

Nights of Cabiria (1957): Only Federico Fellini could bring so light a touch to the story of a luckless street walker who is continually robbed and nearly murdered by the shitheel men she falls in love with. Giulietta Masina was a face dancer of the first order.

Briefly sampled several series on Netflix — American Vandal, White Gold, Five Came Back — but the only thing that stuck was London Spy. The story kind of fell apart by the end, but overall it was stylish and intriguing, and curious in that it was at least as much a gothic as it was a spy film. Also caught a bit of Star Trek: Discovery on Canadian cable. They sure splashed a lot of cash on this one, and if I had DVR privileges I might try to keep up with this on broadcast, but commercials are a drag so I will wait until I can binge it out on some sensible streaming service. It’s not like there aren’t way too many other things to watch …

Talk movies with me, in the comments section below! Thanks!