I was one among a record crowd that turned out for the Wonder Woman movie last weekend, and I had a fine day at the movies. (You should go). And like a lot of people, I suppose, I walked out of the theater wanting to know more about Wonder Woman. She’s a character that’s been around longer than most of us have been alive, but she was never at the top of my reading stack. It’s a pleasant thing to have new things to explore when you’ve been reading comics since the 1970s!

What better way to begin a Wonder Woman deep dive than to go all the way back to her first appearance? That’s right, I’m talking about … issue #8 of All-Star? 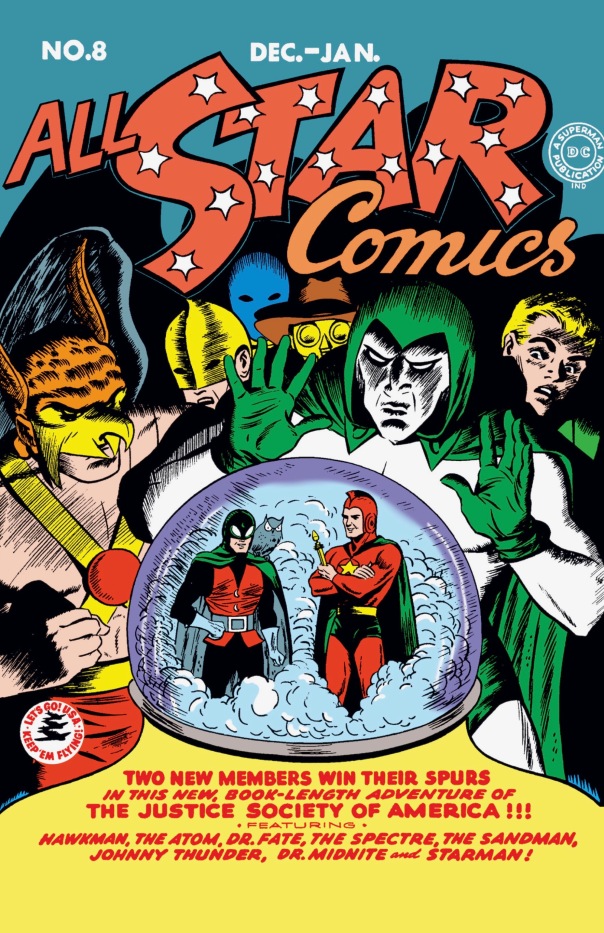 Yep, All-Star. This December, 1941 issue was fronted by a Justice Society story where Starman and Doc Midnight did some damn thing or another. It was probably great! But the reason we remember this book is because of the back-up story … Introducing Wonder Woman!

Now, to be honest, many Golden Age comics can be a tough read. Art can be primitive, the stories can be all over the place, and a modern fan looking for familiar versions of their heroes may come away thoroughly perplexed. Over the years, I’ve come to make peace with Golden Age stories. I previously wrote that Silver Age books feel like musicals to me. Well, Golden Age stories feel more like dreams, where details swim around and odd images stick in your mind. Treating Golden Age books like lucid dreams has opened me up to a whole new world of comics.

And this first appearance of Wonder Woman is no exception. There is a dream-like quality to the story and art. But unlike a lot of books from this era, the story isn’t lacking for storytelling or craftsmanship. Wonder Woman hits the ground running, pretty much fully-formed from the get-go. And small … uh … wonder! Wonder Woman was more than a comic — it was a blueprint for a Utopian society.

Wonder Woman’s origin story hits the tropes you might expect. The “gimmick” here is role reversal, with a woman hero taking care of the men in repudiation of the “damsel in distress” roles served by women in comics (now as then, sadly). No sooner has intrepid airman Steve Trevor crashed on hidden Paradise Island than Princess Diana — the future Wonder Woman — is effortlessly carrying him to safety, while the other inhabitants of that mystical land gather around and shout MAN! MAN!

But this isn’t just to drive home the fact that Paradise Island is home to an all-female society. As creator William Moulton Marston would later say, “Frankly, Wonder Woman is psychological propaganda for the new type of woman who, I believe, should rule the world.” Marston wasn’t writing a one-off adventure story, intended to quickly thrill and then just as quickly be forgotten. Marston was using a comic book to write for the ages.

Marston had a vision of a world rules by strong, benevolent women. He’d worked out the details and backstory of how this society came about, and we wanted us to know the details:

don’t see many text info-dumps in current comics — used sparingly, I kinda like it

Marston was a fascinating character — an academic, a writer, and a bit of a crackpot who might reasonably be said to have invented a lie detector (insert your own Lasso of Truth insights here). Years after creating Wonder Woman, it would be learned that Marston was in a polyamorous relationship with his wife and a former student (herself a niece of birth control activist Margaret Sanger), and Marston had children by both of them. All of which is between Marston and his partners, of course, but when juxtaposed against the social mores of the 1940s, and the ethos evinced in these early Wonder Woman stories about the benevolent superiority of powerful women, then, well … Marston was talking the talk and walking the walk (or at least in close proximity to women who were).

All of which lends a little more punch to a tale that sees the Queen of Paradise Island heed the advice of her gods to send one of her number into the wide world to “fight for liberty and freedom for all womankind!”

I blew up that panel of Queen Hippolyta, above, because it is, frankly, beautiful. Marston’s uncredited co-creator in these early Wonder Woman tales was Harry G. Peter, who brought a lifetime of illustrating experience to this work. Unlike many Golden Age artists — who often seemed to be teens or very young men learning how to draw as they went along — Peter was an accomplished artist. In his sixties when he did this work, Peter brought an austere, Art Deco quality to the book. To use a banal term, Peter’s world of Wonder Woman is pretty, something that couldn’t be said about the contemporary comic adventures of Superman, Batman, or Captain America (though Bill Everett’s Sub-Mariner might be in the conversation).

Wonder Woman’s origin is told in two parts. In All-Star, we see Princess Diana rescue Steve Trevor, learn the story of Paradise Island, and watch Diana enter a contest to choose an emissary to take Trevor back to the United States. Sporting one of those disguises that only fools characters in Golden Age comics, Diana runs the table in a series of skill and strength contests, and takes the laurels in a bullets-and-bracelets showdown.

The story continues in Sensation Comics #1, where Wonder Woman rated the cover, repurposing her original splash page appearance, with a couple bullets bouncing offer her bracelets to make it clear that, hey, there’s some action here, and not just a call for equality and enlightenment in a world ruined by men who wish only to possess and destroy.

… and with Steve dropped off at the hospital, Diana does what any tourist would do in an American big city — she checks out the latest fashions. I love how she’s utterly indifferent to society’s scorn and catcalls.

Of course, this being a comic book, it’s only a matter of moments before Diana happens on a bank robbery, which our hero foils with casual aplomb.

Leaving the scene of her heroics, Wonder Woman is clocked running at 80 MPH (in heels!) by a theatrical agent interested in a quick buck.

Wonder Woman is a sensation (ahem), playing to packed houses with her bullets-and-bracelets routine, and I guess she’s good enough with that trick to ensure ricochets don’t deflect into the crowd!

There are some shenanigans with profits, but Diana makes certain she gets her share.

But why does Diana need money, anyway? It isn’t to buy those clothes she was admiring. No, Diana uses the cash to buy an identity — as unique a civilian origin as I believe I’ve ever encountered in comics.

With her cover story in place, Wonder Woman has the full Superhero Starter Pack — a name, a costume, a secret identity, a love interest infatuated with her hero identity while she’s standing right next to him in her secret identity, and a barn with an invisible airplane. Not bad for the new Amazon princess in town. 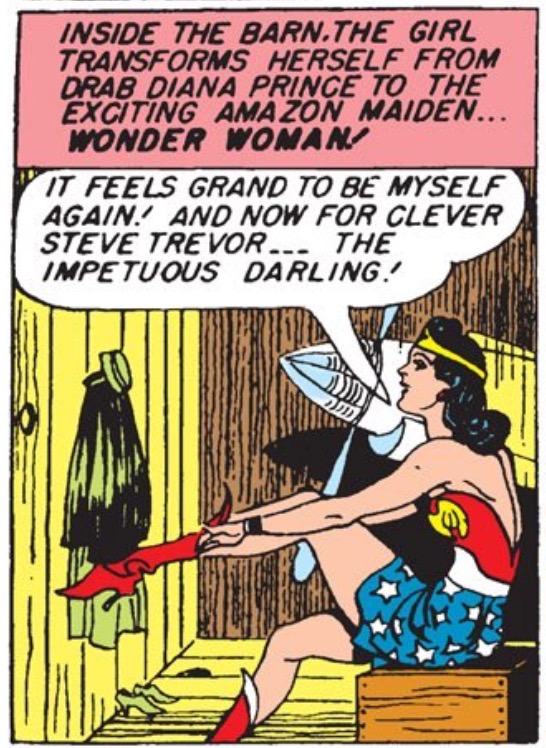 After Steve gets out of the hospital, there’s finally a bit of action wrapping up the business of aerial saboteurs that led to Trevor blundering onto Paradise Island in the first place. My antenna went up when the story mentioned the bad guys were brewing a deadly kind of gas that would corrode right through a gas mask — a plot point wrapped into the new Wonder Woman film, seven decades later. And my antenna went right again down when, a couple pages later, the gas is set off and our heroes are saved by their gas masks (Golden Age stories are like a dream, remember?).

Along the way, true to form, Diana needs to save impetuous Steve Trevor. Again!

The story ends with our heroes surviving the explosion of the illicit gas warehouse — and another one of those elegant, beautiful panels by Peter, with enough motion even Jack Kirby might take notice.

And with that, the legend is born, replete with the promise to to best “the world’s most villainous men at their own game!” 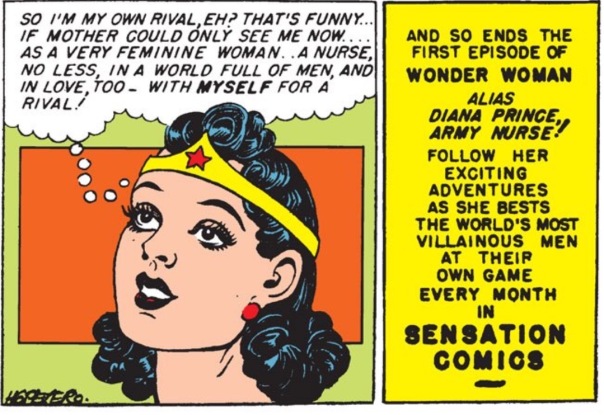 And so Wonder Woman is launched, with pure intentions, and pure results, in a beautifully-crafted two-part story that entertains and enchants with its dream-like simplicity. It’s a purity that would take a beating in years to come. Wonder Woman herself would become iconic, but her book would see ups and downs, with as many reboots and retcons as any superhero out there — her book moved from the contemporary era to World War 2; her powers stripped away so she could become some kind of Mod avenger; and several times starting over fresh as DC wiped their continuity (and don’t even get me started about Wonder Girl).

Through it all, Wonder Woman’s popularity has endured. I guess she really was built to last, and if we haven’t yet attained the female-dominated Utopia her creator envisioned … well, the new century is still young! Here’s hoping we survive to the end of it, with Wonder Woman there to guide us.

NEXT MONTH: #169 The Death of Captain Marvel