Longbox Graveyard comic book blasts from the past!

Ant-Man And The Wasp

Ant-Man And The Wasp buzz into theaters this week!

To celebrate the return of what might be Marvel’s most unlikely cinematic smash series, I’ve updated my article on Ant-Man’s origins as “The Man In The Ant Hill!”

Click HERE to read all about Ant-Man’s first appearance (and the origin of that groovy Jack Kirby ant helmet!)

Caught the Mad Titan signing in the shower. He must know that today is the day for Avengers Infinity War!

Sing your own songs in the comments section, below!

Wrapping up Longbox Graveyard’s run-up to Avengers Infinity War, we take a look at the last time the Avengers fought a big war in outer space — the Kree-Skrull War!

I’m four decades past my own personal comic book Golden Age, so I don’t expect everyone else to attach a lot of importance to many of the books I’ve examined here at Longbox Graveyard. Titles like Ms. Marvel, Micronauts, The Defenders, and Deathlok were obscure in their day — I’ve celebrated them here but I am fully aware few of today’s fans share my enthusiasm for these moldy oldies. But there are some titles from my heyday that I would expect to resonate with “kids these days” — titles with characters that are still active today, with events that form the historic underpinnings of continuing comic book universes.

I thought the Avengers‘ Kree/Skrull War was one of those events, but no dice. My twenty-something office pal — who loves comics, and previously borrowed my copy of Avengers #196 to read the origin of Taskmaster — had never heard of the Kree/Skrull War!

What are they teaching in our schools??

Listen up, you whippersnappers! Before Avengers vs. X-Men, before Secret Wars, before Crisis on Infinite Earths, before even the Avengers/Defenders War there was the Kree/Skrull War! This was a mega-crossover in the old school style, the natural evolution of storytelling in a single book — not a mandated summer crossover, not some bloated high concept that poisons an entire comics line for six months of the year, and definitely NOT an imaginary story!

The Kree/Skrull War story arc ran from issues #89-97 of the Avengers (though when Marvel reprinted the saga in 1983, they restricted themselves to just the final five issues of the run). Nearing the end of his iconic six-year stint on Avengers, Roy Thomas — along with artists Neal Adams and Sal & John Buscema — delivered what was up to then arguably the longest and most complex continuing story in superhero comics, as Earth became a battleground between the warring Skrull and Kree star empires. Nowadays, company-wide meta-stories sprawling over dozens (hundreds?) of issues are a recurring summer plague, but in 1971 any story running more than a couple issues was a big deal. 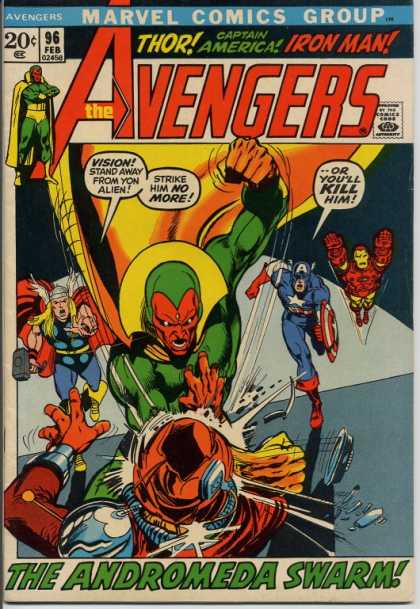 The tale is deeply enmeshed in Marvel continuity but in the style of the day, it’s easy to jump on board as a new reader, thanks to liberal flashbacks and recaps of what has come before. Summarizing the tale makes it seem more complex than it reads, but I’ll give it a go anyways.

The action kicks off with Captain Marvel cracking out of the Negative Zone, then racing off half-cocked (and leaking radiation) on a mission to steal a rocket to return to his Kree homeworld. But no sooner do the Avengers lay him out cold than everyone is attacked by an awakened Kree sentry, acting on the orders of Ronan the Accuser, who has staged a coup against the Kree Supreme Intelligence and is seizing the moment to settle old scores with Mar-Vell and everyone else on Earth. The battle with the Kree sets off a worldwide alien panic, aided by a Skrull agent provocateur masquerading as a Joe McCarthy-style Senate investigator, and suddenly our heroes are facing some classic, shades-of-grey Bronze Age comic book hard choices as they decide whether or not they should turn Mar-Vell over to the authorities.

The public turns against the Avengers while Mar-Vell, Scarlet Witch, and Quicksilver become hostages of the Skrulls. The series climaxes with the Avengers facing down the Skrull warfleet, while Rick Jones — captured and brought to the Kree homeworld — is empowered by the Kree Supreme Intelligence to end the battle via a (frankly disappointing) deus ex machina. The story ends right when it should be getting started, offering an unfortunate and arbitrary end to what had been a superior run.

Despite this disappointing climax there is a lot to like here. The series is broad and ambitious, and there’s always something impressive about watching the Avengers fight in outer space, as they would later do in memorable issues of Captain Marvel and Warlock. But those later battles were all-hands-on-deck affairs for the fate of the universe. This battle was just a few Avengers in the lonely void of space against an entire Skrull battlefleet, made to feel underplayed and epic at the same time through Roy Thomas’ borderline-purple prose storytelling.

One of the strongest elements of this run is the way Roy Thomas handles the Vision. Introduced by Thomas in the classic issue #57 of Avengers, the Vision would evolve from android assassin to one of the most unique and fascinating members of the team. It’s hard to overstate what a superstar the Vision was during the 1970s (and one of Marvel’s great sins is how they so thoroughly worked over this character for no real gain in their late 1980s-era “Vision Quest” storyline). It is in this arc that we see the Vision’s soul well and truly begin to evolve, first by brooding on his sense of separation from and yearning for human emotions …

… then finding himself prey to all-too-human emotions as the long-simmering romance with the Scarlet Witch come out in the open in issue #91 (which also featured the debut of the Vision’s characteristic “rounded rectangle” word balloons, though they wouldn’t be yellow until issue #93):

What follows is the right kind of comic book soap opera, where the characters spend several issues coming around to what the reader has already accepted — that these two characters are made for each other. Roy Thomas gives us a master class in superhero romance.

The run is also kind of haphazard. Thomas admits he didn’t have a masterplan for the Kree/Skrull War, and the event really is more like a continuing subplot than a world-shattering event. Reading these issues today, you might be disappointed that there is so little waring between Kree and Skrull in the Kree/Skrull war! The event is largely off-stage, and while Earth is threatened with becoming the key battleground in the war between the empires, that event never materializes, as our heroes head off the worst of the war before it can get started. Likewise, issues devoted to the Inhumans and an (admittedly very cool) issue where Ant Man explores the innards of a deactivated Vision distract from the war, but it is important to remember that this was almost an accidental event, and that unlike the top-down editorial events of the present age, the point wasn’t to replace the rhythms of the host book so much as it was to provide context and color to the usual Avengers adventure of the month.

It’s worth noting how Roy Thomas assembled pieces from all over the Marvel Universe to create a story that was greater than the sum-of-its parts. Always a fiend for continuity, Thomas reached all the way back to Fantastic Four #4 to find the Skrull secret agents central to his story, and the Kree — who had been kicking around Marvel stories since 1967, mostly as the heavies in the pages of Captain Marvel — suddenly seemed more interesting, coherent, and purposeful than we’d seen them in earlier books.

The art, too, deserves mention. Even Sal Buscema — whom I’ve damned with faint praise here at Longbox Graveyard — turns in notable work, with clear storytelling and a bit of visual flair. 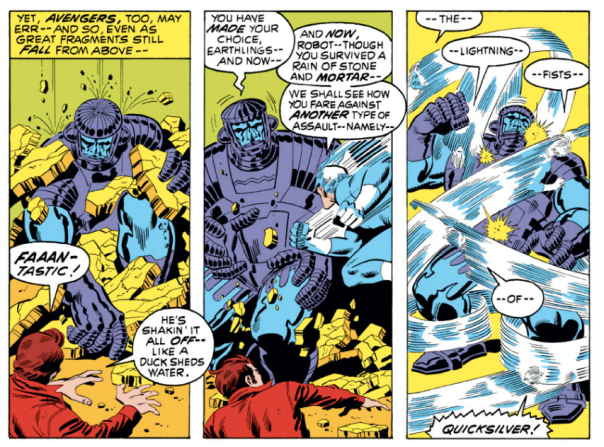 a nice three-panel sequence from Sal Buscema in Avengers #90

John Buscema is his reliable self here, coming to the end of his legendary Avengers tenure, but it is Neal Adams who is best remembered from this run, and it is easy to understand why. Adams’ realistic approach to composition and anatomy set him apart from most artists of his day, giving the Adams Avengers a kind of rooted and believable quality more akin to film than comic books.

Also deserving accolades is Tom Palmer on inks, who handles the final issues of the series, and smooths the transition between alternating John Buscema and Neal Adams chapters.

So what do you think? Am I living in the past by insisting events like the Kree/Skrull War form an essential part of the Marvel canon? Should I have picked a more recent Avengers event to celebrate here on the eve of the movie’s release? Or is this Avengers run a classic despite my callow twenty-something office mate’s ignorance of these mighty events? Assemble your Avengers reactions in the comments section below!