Vote In The Tournament of Terror Final — Swamp Thing vs Ghost Rider!

Our championship final is set! In our Final Four, Swamp Thing easily swatted aside Werewolf By Night, while Dracula recovered from Ghost Rider’s fast start to at least make a fight of it, but Ghost Rider prevailed in the end!

I felt a little bad for Dracula going down … but defeat is part of his DNA. He’s always getting staked or baked to ash, and always rising again. Dracula is the Comeback King. He’ll return soon enough to call us all “miserable clods” or “cretins” or “dolts.” (On second thought, maybe I don’t feel so bad for him, after all).

On to the title match! Get your votes in EARLY this time … unlike previous rounds, voting is open only through Tuesday night! 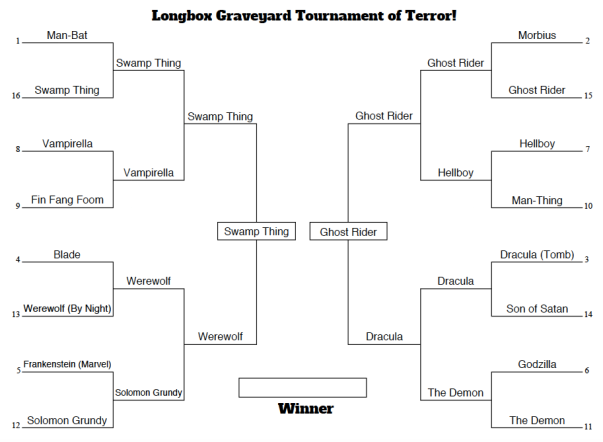 Swamp Thing vs. Ghost Rider: Our month-long tournament concludes with a DC vs. Marvel match-up! Swamp Thing has yet to be seriously tested in this tournament … is Ghost Rider the fiend to do it? Or will Ghost Rider’s skid marks terminate unceremoniously at the edge of the swamp?

Remember to vote early. Polls close TUESDAY NIGHT — we want to get a result before Halloween.