← Marvel Value Stamps — A Book Of Horror
Tournament of Terror Round of 16! →

King of the Monsters!

The long and winding road that has been the Longbox Graveyard has taken some unexpected side trips. When I began this blog I intended it only as a means of keeping myself on track as I cataloged and sold off my Accumulation of unwanted comics.

But a funny thing happened on the way to eBay … I started reading my comics again, and found that I kinda sorta still liked them. After decades away from funny books, suddenly I was hip deep in the buggers, not only reviewing favorite books like Conan and Thor, but also looking at newer series like Ed Brubaker’s run on Captain America, and even exploring the intersection of comics and technology with books like Operation Ajax and the vintage comics on offer through Marvel’s Digital subscription service.

Surprises all! What I never expected — with so many issues of Master of Kung Fu, Fantastic Four, Batman, Daredevil, and Swamp Thing as yet unexamined — was that I would devote an entire column to Marvel’s Godzilla. 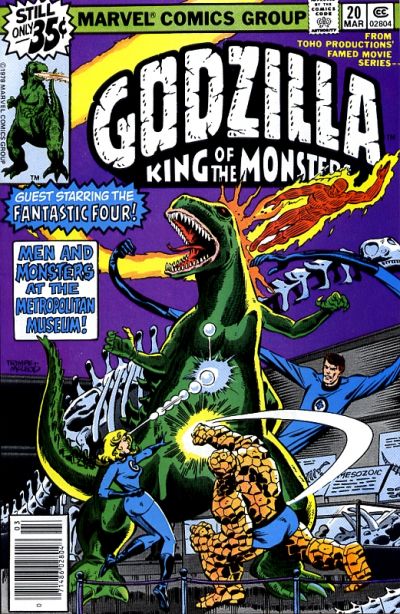 Inspiration comes when you least expect it. There I was, arguing the merits of John Carter with fellow blogger Mars Will Send No More when the conversation turned — as it will among learned men — to the merits of fictional T-Rexes. Before I knew it I was committed not only to reviewing Godzilla, but also to participating in a March Madness T-Rex Beat-Down tournament (for the results of which, mouse over to Mars’ blog).

Mars and I don’t always see eye-to-eye, but I echo his blog comments excluding Godzilla from our tournament, and not merely because Godzilla isn’t a proper T-Rex. As Mars put it, “… Godzilla annihilates everything, everyone, everywhere, always. And any story where he didn’t is a lie.” Godzilla is an outsized character who can’t help but dominate any scene he enters, whether he’s sharing the stage with a field of cinematic dinosaurs or the headline characters of the Marvel Universe. 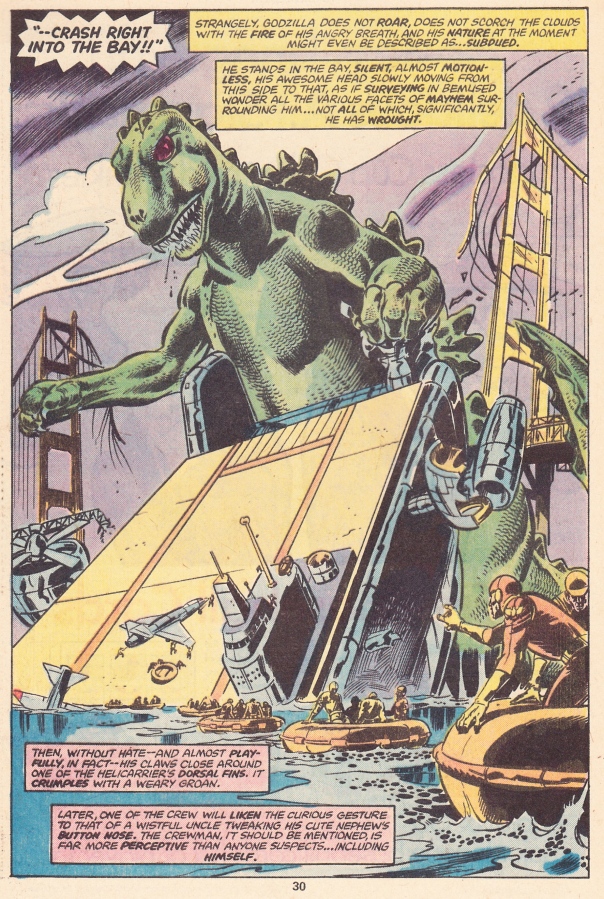 Godzilla annihilates the S.H.I.E.L.D. Helicarrier (and the Golden Gate Bridge for good measure)

And so what of Marvel’s Godzilla? Does this big green galoot annihilate everything and everyone, everywhere and always? Or is Marvel’s version of the King of Monsters a big pile of lies?

My plan was to review just those Godzilla books I had in the Accumulation — issues one to six or so — but after the first half dozen books I found myself unaccountably caught up in the admittedly thin story. So rather than dump my Godzillas for pennies on eBay, I instead went into WonderCon determined to fill out my run, but found that the dealers on the convention floor thought their Godzilla back-issues were worth ten bucks a pop.

Hey, I like the book, but there’s a limit. My first impulse was to review what I had and offer the first “incomplete” grade on the Longbox Graveyard report card, but then thirteen bucks and a trip to eBay secured a copy of the black & white Essential Godzilla, and the great Godzilla review project was on once more! 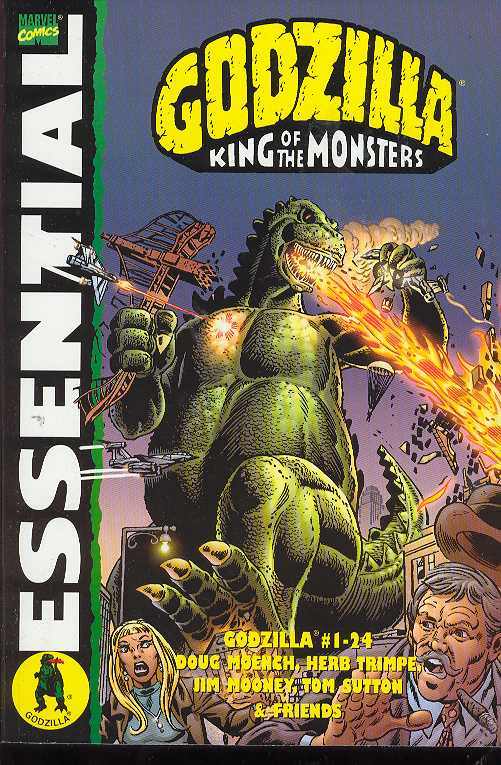 So what was the deal with Godzilla, anyways? The year was 1977, and Marvel would try just about anything, including adding the Godzilla license to the Marvel Universe. What could have been a disaster was instead a workman-like book in the tradition of late 1970s Marvel, where solid editorial standards and dependable mid-list talent ensured a firm floor for the entire comics line. It’s rare to find a truly dreadful Marvel book from the late 70s, and thanks to an energetic effort from the Doug Moench on scripts and a professional job from penciller Herb Trimpe we have two years of Godzilla books that for the most part deliver the goods — neither very good nor very bad, but always entertaining and probably better than the series had any right to be.

A snappy first issue introduces Godzilla to the Marvel Universe (and you can read that issue online, in it’s entirety, over at Mars Will Send No More). It does feel like Marvel was hedging their bets, at least at first. Pitting Godzilla against S.H.I.E.L.D. was an inspired choice, but we get the S.H.I.E.L.D. B-team here, with secondary Helicarriers commanded by Dum Dum Dugan rather than the iconic Nick Fury. When Godzilla stomps Alaska, Seattle, San Francisco, and San Diego in short order, it really should get the attention of the Avengers and Fantastic Four (but we will have to wait until the end of the series for that moment). Rather than scrambling even the B-team Defenders to the rescue, we get the forgettable Champions for a serviceable superhero battle with the Big G most memorable for Hercules taking down Godzilla with a judo flip. 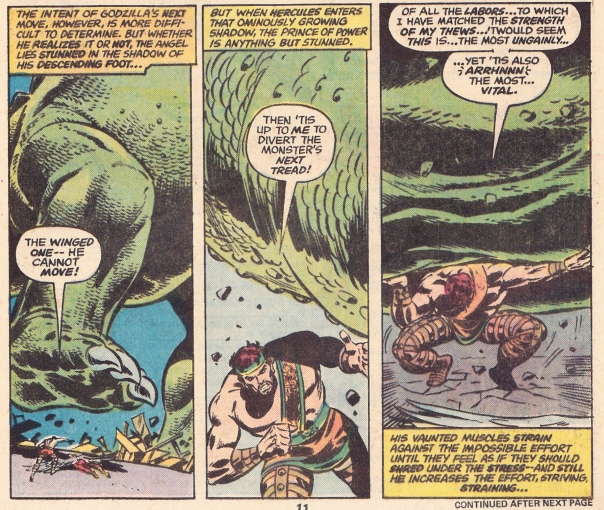 The Marvel Universe has always been New York-centric, but you figure it would get national attention when Godzilla destroys Hoover Dam, stomps Las Vegas, and wrecks Salt Lake City during a battle with bizarre space monsters … but Godzilla is still regarded as a hoax when he finally makes it to Manhattan in issue #20, and only then do Marvel’s most iconic heroes scramble for a pretty decent superhero fight against Godzilla. 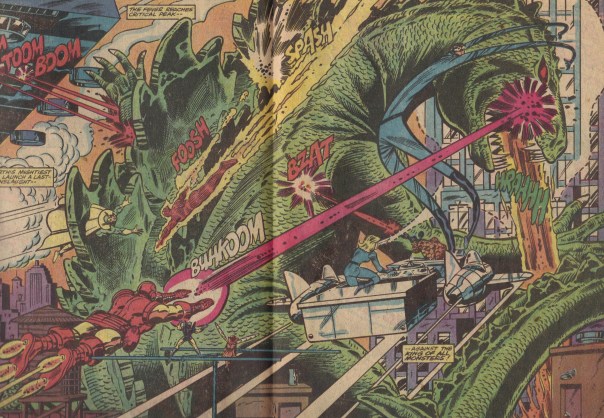 But I’m not sure Moench could have handled Godzilla any other way. In contemporary terms, Godzilla attacking the United States would warrant a summer’s worth of Marvel Comics cross-overs, bleeding into every book in the line, but in 1978 Moench and Marvel elected to keep Godzilla partitioned in his own little bubble of the Marvel Universe. The only alternative would have been to go right at it — to deeply integrate Godzilla in the line with increasingly improbable cross-overs every issue, which would have been a hoot with an absurdist writer like Steve Gerber or David Anthony Kraft, but there’s no way it could have been a sustainable premise.

Instead, Moench went to the Marvel monster playbook, adopting the tropes on display in books like Man-Thing, Tomb of Dracula, and even Hulk, where his title character is a remote and sometimes unfathomable anti-hero, while the subplots and characterization revolve around supporting characters trying to help or hinder the star of the book. And this proves one of the weaknesses of Godzilla. Along with the aforementioned S.H.I.E.L.D. back-up squad we have a team of generic Japanese scientists trying to stop Godzilla, including a twelve-year-old boy who (of course) bonds with a giant robot to fight the monster that he is convinced is good at heart.

In the first year of the book, Moench also gets some play out of examining Godzilla’s motivation. Is he a rampaging monster, or a misunderstood victim? The cast eventually comes down on Godzilla’s side, but Dum Dum Dugan needs some convincing.

The second year of the book is a little more whimsical, and while the plot contrivances of pitting Godzilla against cowboys (in a distant echo of Valley of the Gwangi), or having Godzilla shrunk down by Hank Pym’s reducing gas to fight rats in the sewers of New York will make Godzilla purists apoplectic, I found the less leaden tone of these later tales more entertaining. The last half of the book also gave me a renewed appreciation for Herb Trimpe, about whom I always thought the best I could say is that he wasn’t Sal Buscema. Trimpe struggles with facial expressions — Dum Dum’s cigar pops out his mouth the hundred-odd times he wears his “surprised” face, which is identical to his “angry” face. There are plenty of those recycled Trimpe panels where a character’s foreshortened index finger fills half the frame, as someone points, blank-faced, at something happening beyond our view. But Trimpe has real strengths when it comes to draftsmanship, and the backgrounds of his New York are appropriately detailed and authentic. The two-part western interlude also let Trimpe draw horses — Trimpe got his start doing western comics, and he draws good horses, something that’s not as common among comic book artists as you might think.

And he pulled off the odd inspired Godzilla panel, too. 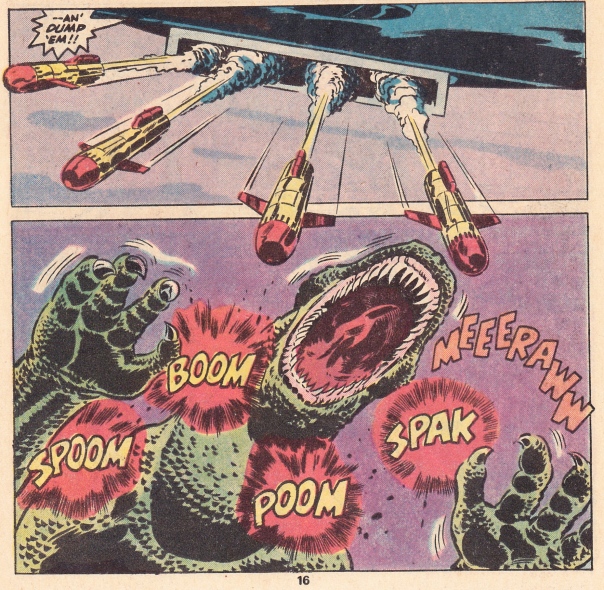 In all, Godzilla does what you’d expect. Our hero stomps a bunch of cities, and he battles but is never really beaten by S.H.I.E.L.D. and Marvel’s superheroes. He crosses-over with Devil Dinosaur, fights a sewer rat, and he shares a panel with Spider-Man. He’s at the center of some ridiculous story lines (at one point reduced to human-size, led around the New York Bowery in a hat and trench coat!), but it didn’t bother me as I’m one of those ignorant gaijin who finds it hard to parse “Godzilla” and “quality” in the same sentence. No matter these indignities, Godzilla emerges from his weird, twenty-four-issue Marvel odyssey with his reputation intact, clearly still King of the Monsters, and having delivered a solid, entertaining run of comic books. 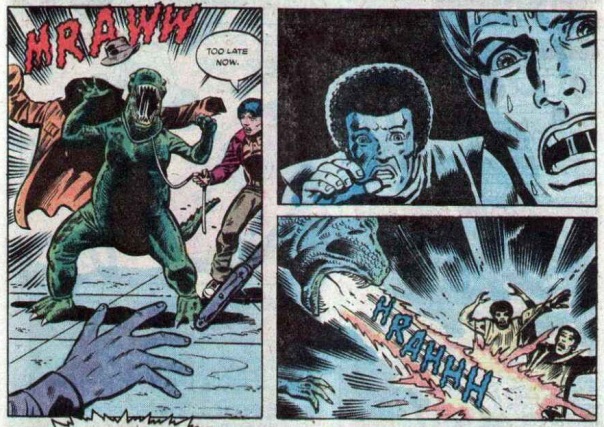 Godzilla in a trench coat! (image via Tars Tarkas.net)

In all, Marvel’s Godzilla isn’t a bad read. I won’t tumble to the inflated prices those WonderCon guys want for this book, but I’d happily fish an issue or two out of the dollar box, and the out-of-print but readily-available black & white Essential Godzilla is an inexpensive way to experience this series for yourself. Where else where you see Thor bonk Godzilla on the nose with his enchanted hammer?

Yep, that happened. Godzilla really was part of the Marvel Universe! A second-class citizen, sure, and this might seem a second-rate book. But Godzilla is not a second-rate effort. Sometimes comics are art, but most of the time comics are just comics, and as a guy who wrote a lot of inventory assignments himself, I have genuine admiration for the team that turned in such consistent effort along the way to bringing this self-contained run to a satisfactory conclusion. I doubt I’ll go back to this series, but I’m happy to have spent a couple nights with Godzilla, stomping through the Marvel Universe. Hail to the King!

MONDAY: The Tournament of Terror Begins!

← Marvel Value Stamps — A Book Of Horror
Tournament of Terror Round of 16! →