Tomb It May Concern

I discovered Tomb of Dracula near the end of the book’s run, tumbling to the unapologetic evil of the comic’s title character as he fought to regain his throne as the “Lord of the Vampires.” Though joining an extended storyline in the middle, I was tantalized rather than frustrated by the book’s footnoting and continuity, coming to regard the series one of my favorites of the 1970s. I’ve always wanted to read the series from the start, filling in details of the origin of Blade, the development of the vampire fighters who hunted Dracula, and Drac’s first arch-enemy, the mysterious Doctor Sun. 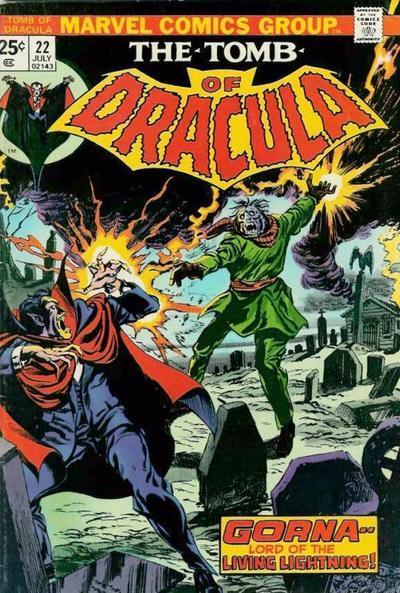 Fast forward thirty-five years and I am months into this Longbox Graveyard project. Tomb of Dracula made it off Ellis Island with no questions asked, and I’ve filled in a dozen or so back issues at Comic-Con sight unseen. With Halloween bearing down this seemed an excellent opportunity to re-open the Tomb, reading the series from the start, experiencing some new-to-me adventures of the Count and his hunters as I worked forward through the series toward tales I dimly remembered as being superior.

How fared the Count when dragged into the light of day for the ruthless examination of a fifteen-year-old turned fifty? Read on! 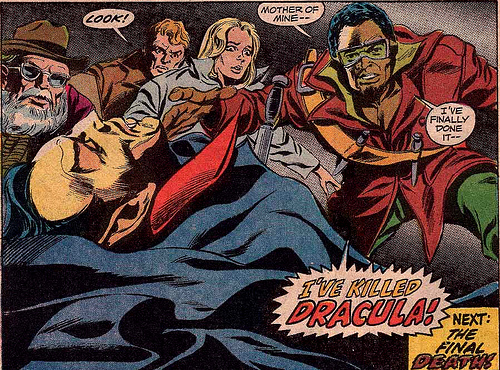 Marvel Comics had a long history of monster books, but they weren’t the gothic kind — the fun-seeking bullet that put EC Comics out of business in the 1950s put paid to axe murderers and zombies, leaving Marvel to get their monster kicks with giant, city-stomping freaks like Fin Fang Foom and It, The Living Colossus. But by 1971 the comics code would relax, cracking the vault door for literary monsters in the classic tradition of Dracula and Frankenstein. Comics publishers pounced on this formerly forbidden candy, with Marvel quickly publishing books like Frankenstein Monster (1973-1975), Werewolf By Night (1972-1977), and Adventure Into Fear (1972-1975) featuring Man-Thing and later Morbius the Living Vampire.

The longest-running and greatest Marvel horror book was Tomb of Dracula. Debuting in 1972, and lasting seventy issues, nearly every issue of the run came from the famously stable team of writer Marv Wolfman, penciller Gene Colan, and inker Tom Palmer. 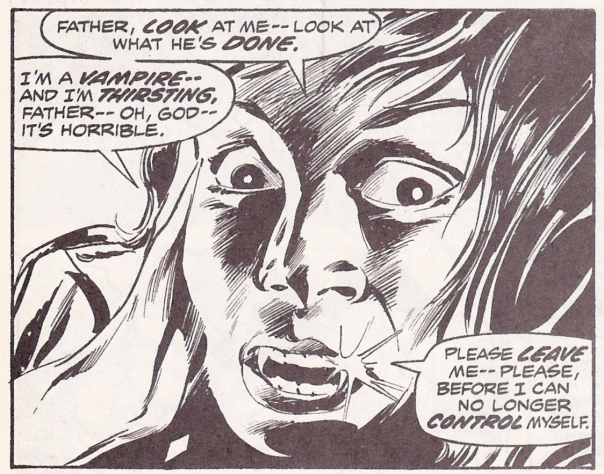 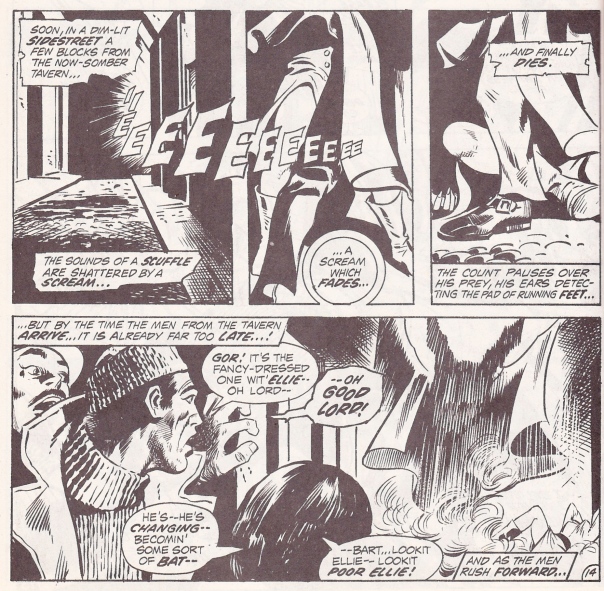 The series rarely wavers. This is a battle to the death between Dracula and his hunters — between good and evil, with little of the ambiguous middle ground of modern vampire lore. If we come to enjoy Dracula’s characterization and admire his icy nobility as the series develops — as in those those rare moments when the Count takes some hapless human under his protection — it is the arm’s-length admiration afforded a deadly serpent or sea creature.

There’s never the remotest doubt that Dracula is an evil bastard who deserves to die. 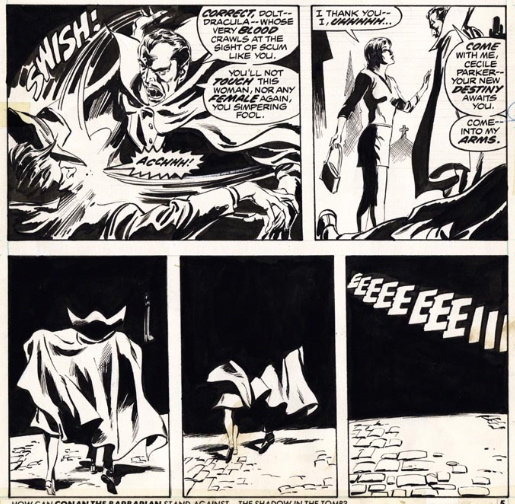 Most disappointing to modern readers will be the design of Dracula himself — he’s an old guy in a cape, designed to hew as close as possible to the Bela Lugosi template without alerting Universal’s lawyers. While the design has the unmistakable virtue of screaming “vampire!” to any twelve-year-old seeing him on a comic book cover, it lacks even the moderately updated look that Christopher Lee was rocking in the contemporary films like Taste The Blood of Dracula. 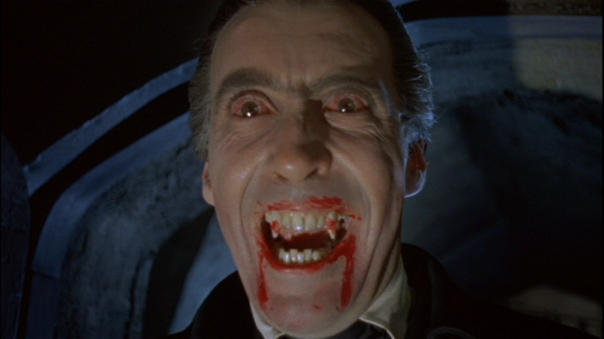 taste the blood of Christopher Lee!

While the covers of the book emphasized opera cape collars and gaping fangs, the interior depiction of Dracula was quite a bit better, where Gene Colan’s brilliant pencils described a more noble Dracula, with a broad forehead and wide face that hinted at intelligence when it wasn’t distorted into a mask of demonic fury. 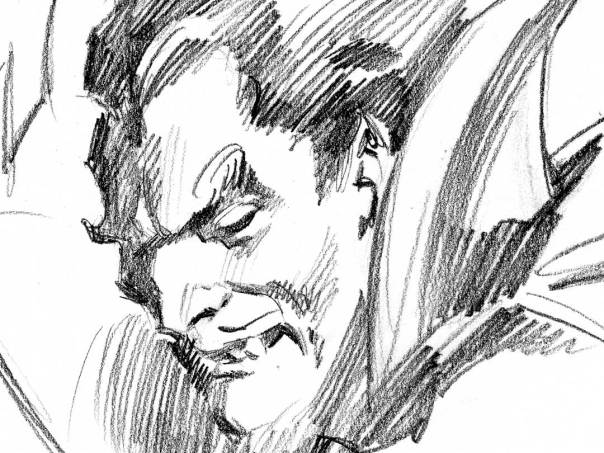 Shadowy, swirly, and emotive, Colan’s pencils rarely show Dracula in his entirety — in practically every panel he seems half cloaked in darkness, or in some misty nether state between man and bat. When Dracula goes into action, Colan’s pencils — which seem to have motion even when his subject is at rest — depict the Count as a swirling cyclone of cape, fangs, and talons, hurling bodies across the room thanks to a strength that Dracula boasts is equal to that of twenty men. 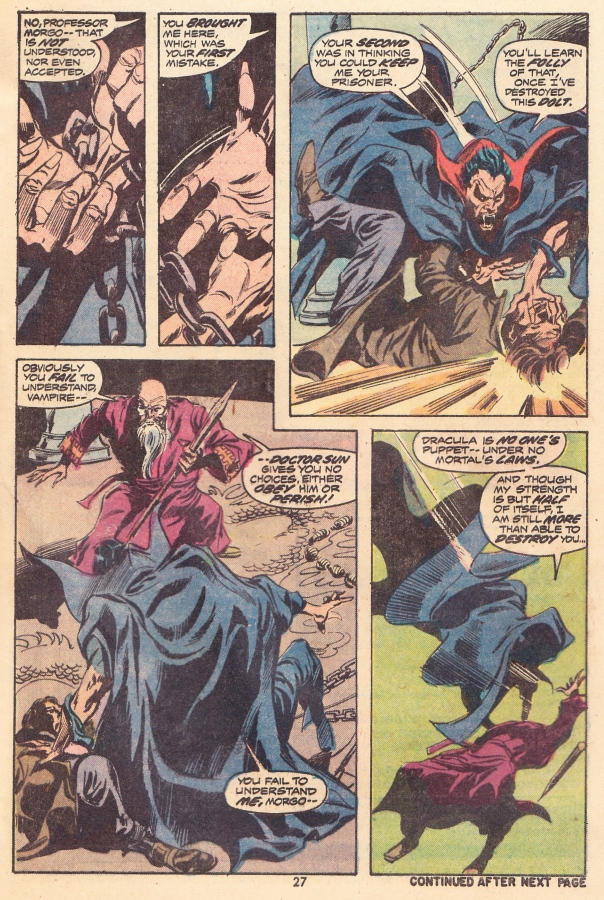 The first nine issues of the book are a bumpy ride, with five different writers, and no better than lighting-flash glimpses of the book Tomb of Dracula would become. Gerry Conway’s origin story recycled Universal and Hammer movie tropes to tell the tale of a distant cousin of the legendary Dracula (Frank Drake), who comes to claim the Count’s castle in modern times. Heavily reliant upon Bram Stoker’s original story, Conway’s script is solid, but a tad over-written and predictable — as you would expect, Drake finds the Count is very much alive, and mayhem ensues

Archie Goodwin followed Conway, wisely introducing additional members of the supporting cast, building a vampire-hunting team around Drake and Rachel Van Helsing (grand-daughter of Dracula’s arch-nemesis) and her mute Indian servant, Taj. Gardner Fox wrote issues #5 & 6, and while his writing was melodramatic, his style pointed toward a new characterization for Dracula — the haughty, cruel nobleman, “Lord of the Vampires,” who views all beings as lesser creatures he is destined to rule.

Gene Colan’s art is worth seeing from the very first issue, but less patient readers can safely wait until issue #12 to jump aboard, when Marv Wolfman has gotten his feet under him, and Tom Palmer has permanently rejoined the creative team. That issue sees the primary cast of vampire hunters fully assembled — now including the wheelchair-bound gadgeteer Quincy Harker, and Wolfman and Colan’s original creation, Blade, the Vampire Hunter, who would outlast this series and appear on the screen in a trilogy of Wesley Snipes movies (the first of which remains a guilty pleasure). 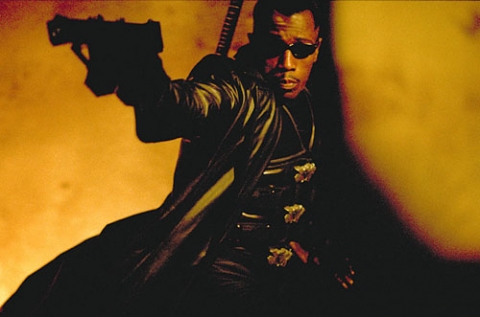 For the most part, Wolfman would discard the old-fashioned, gothic tone of the early series and over time transform the book into a more modern and fast-moving adventure tale of hunters and the hunted. But even after Wolfman is aboard, the series is uneven, advancing in lurches and stops, and developing little of the multi-issue narrative that I remember from the end of the run. Wolfman’s first dozen issues are mostly a series of one-off stories of varying effectiveness.

But to criticize the book for this structure is to hold it to the standards of a different day. In the 1970s no one was “writing for the trade” (six or twelve issue epics intended for eventual republication as trade paperbacks). Stories were told in one or two parts with subplots that might go on for months before evolving into full storylines. In this the book was actually a little ahead of itself, in that its many stand-alone issues are linked, however tenuously, into a larger narrative revolving around Dracula and his pursuers.

What really made Tomb of Dracula unique for its time was that this was a comic book about a bad guy. Not an anti-hero — a genuine bad guy, a murdering demon who sought to enslave the human race. As such it always felt that the stakes were higher in Tomb of Dracula — that the deaths were more real, and that something greater was at issue than the four-color punch-ups of Marvel superhero books. Aside from a couple cameos, this early part of the run wisely partitioned Dracula from the Marvel universe, giving the book a chance to develop its own tone and mythology, and avoiding the cognitive dissonance of crossing Dracula over with flying girls in tights.

After the formulaic-but-entertaining issues #12 & 13, Tomb of Dracula takes a step back. Issue #14 revolves around a preacher and a contrivance that positions Dracula’s body as the central attraction in a revivalist prayer meeting — it’s heavy-handed and forced. Issue #15 is a series of vignettes told in flashback by Dracula (which don’t quite add up) and #16 is a Tales From the Crypt-style story of the poorer sort, with a cool-looking monster but not so great an ending. Issue #17 is an intriguing and violent tale set aboard a train to Transylvania, but momentum is lost the following issue, the first of a two-part crossover with Werewolf By Night, which is mostly about Jack Russell and his girlfriend, and doesn’t advance Dracula’s story in any meaningful way.

Issues #19 and #20 are moody — set during a blizzard in the Transylvanian alps — but too reliant on coincidences and plot contrivances, with Dracula and Rachel Van Helsing the unlikely survivors of a helicopter crash, and Dracula unconvincingly failing to kill his foe because he needs to “save her for later.” The issue bottoms out when our heroes accidentally stumble into a secret headquarters of the mysterious Doctor Sun (last seen in a pagoda on the coast of Ireland!) … 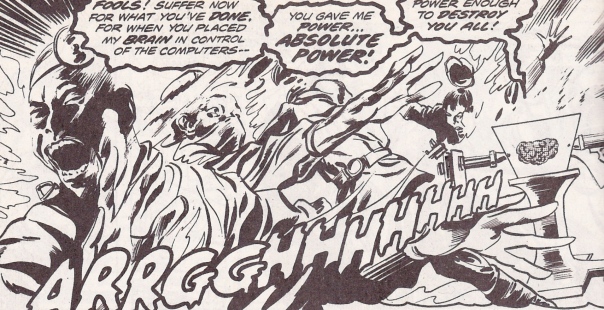 … but there follows some redemption, because for all that Doctor Sun is ridiculous, he’s also damn awesome — a Communist Chinese mastermind vampire brain in a box? What’s not to like? But before we can delve too deeply into the Doctor’s deeply weird plan — which involves mind-swapping devices and a plot to rule the world with an undead army — the base has been destroyed and Drac is wrestling with some minor vampire in the Russian countryside, a story based on authentic folklore (according to the letters page), but feeling that much more shoehorned into the book because of it.

It is with the cross-over starting in Giant-Sized Chillers #1 and concluding in Tomb of Dracula #23 that the series most closely begins to resemble my memories of the later run. Dracula gets pulled into a haunted house story revolving around an English castle he wants to inhabit, and along the way becomes emotionally involved with a mortal woman. It is also at this point that Wolfman’s subplots begin to get traction — Dracula’s hated daughter, Lillith, has been resurrected; Taj is summoned home to India on a mysterious mission; Frank Drake suffers an identity crisis; and Blade gets a starring role for an issue, fighting it out with Dracula in a London department store. 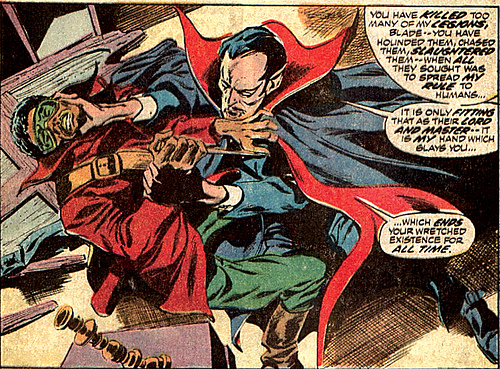 With issue #25, vampire-hunting private eye Hannibal King is introduced, in one of the better stand-alone books of the series, and it appears the book has genuinely found it’s footing … but it is here, arbitrarily, that I end my review, both because the sun is rising, and because The Essential Tomb of Dracula Volume 1 (the black & white reprint I’ve relied upon for most of this run) only goes up through issue #25!

In time I will return to this series to see if it develops into the book I remember. I have nearly caught up with my collection of original books, and I look forward to abandoning the Essentials and continuing this tale in all it’s murky, poorly-printed, full-color glory. But for now Dracula goes back in his Tomb, having not quite lived up to my expectations, but with an undiminished promise of better tales to come.