← First Issues Comics Sale!
Tell A Tale of The Guardians of The Galaxy! →

A Tale of Two NerdWalks

Apologies for the long silence here at Longbox Graveyard, and thanks to my readers who have stayed with me through this interruption. I’ve been distracted these past several months with a job search on two continents, and then an international move to accept a new position in Vancouver, B.C., Canada.

I planned my move like the Mad Thinker, and used this latest change as another opportunity to downsize. I brought precious few of my geeky possessions to my 600 sq. ft. Canadian attic digs. A couple boxes of books, a few games, and no comics at all — digital serves me fine in this regard. I have an old video game console, streaming music, digital subscriptions to HBO and Netflix and Filmstruck, a Kindle full of books to read, an iPad perfect for comics reading … really, I have more entertainment on hand than I could plow through in a lifetime. Plus my landlords offer free cable, so after being unplugged for two years, I’m catching up on hockey.

My first month here has been spent riding out the rainy rump end of the winter, and settling in at my new job. There hasn’t been a lot of time to do much more than go to work and tinker with my new apartment. My wonderful wife remained behind in California to stay close to our boys as they finish out with school, so I am a fifty-something bachelor up here, able for the first time in decades to devote myself to work, work, and nothing but work. It’s fine.

But with the skies clearing up and my furniture all bolted together, I’ve gotten the itch to go out a bit. My job is sedentary so any excuse to walk is welcome, and when the sun makes a rare weekend appearance, it is practically a survival imperative to get outdoors and get in some miles. Nerd that I am, thought, this hasn’t meant experiencing Vancouver’s startlingly-close and dramatic wilderness (though I am looking forward to that).

more-or-less the view from my back door

My geek life began as a NerdWalker. In the summer of 1974 — my twelfth year, my own personal Golden Age — I walked up and down Hollywood Boulevard, poking into comics shops and record shops and magic shops and used bookstores, sneaking into R-Rated Bruce Lee movies and buying slices of pizza with a wadded-up dollar bill.

My first impressions of independence and imagination are indelibly intertwined with dusty magazines, old movie stills, rock & roll posters, and long walks up and down cracked sidewalks, carrying treasures home in paper bags … and I still have many of those treasures, packed away in my California home, things that have stayed with me despite my many purges.

So it should come as no surprise that my pulse stirred a bit when I realized there was a comics shop about a fifteen minute walk from my front door. And that there was a horror memorabilia shop about fifteen minutes past that, with three used book stores along the way. Planning it out on Google Maps promised a moderate three-mile loop would stretch my legs and let me pretend I was twelve years old again.

a bit before my time, but spiritually accurate

What better way to spend a Saturday?

I hit the horror shop first. I was really intrigued by this place — it looked so funky from the curb, a real throwback to the bizarre retail caves of my youth. And the shop was pretty much what I expected. It was smallish inside — not much bigger than a convention booth — and the stock was a little thin. Mostly posters, a few books, a couple games, an odd collection of used books and some handcrafted items. Not so different than a comics shop, with a narrow focus on horror. The guy behind the counter was friendly enough. There was a Boris Karloff poster that I kind of wanted.

But I remembered that I’d walked to the shop, rather than taking the car, and I didn’t want to haul that framed poster back to the house on foot, especially with the stops I still had planned. And even though the prices were reasonable, I wasn’t eager to open my wallet. I’ve moved to Canada to take a job and send money home to pay tuition for my boys. I mean, if anyone could be said to need a Boris Karloff poster, I’m your guy, but even I don’t really need a Boris Karloff poster. 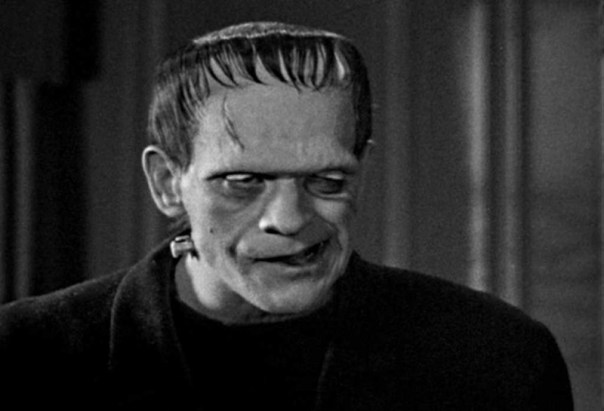 don’t give me that look

I said goodbye and hit those used bookstores.

I had a vague plan of trying to scare up some cheap, classic science fiction and fantasy. Maybe a vintage paperback edition of Frank Herbert’s Dune, or some Fritz Leiber fantasy, or maybe an old Roger Zelazny book — it’s been decades since I read Lord of Light. The stores were well-stocked, and they had plenty from those authors, but nothing that suited my Goldilocks demands — that cover wasn’t quite correct, this series wasn’t exactly what I was looking for … nothing was just right.

either of these would have done

One store had a terrific collection of mystery novels, and I had a nice hardback edition of The Maltese Falcon in my hand for awhile, but I’ve already read that book several times, and the only reason to buy it would have been to perch it on my shelf, where it might offer a fatal distraction from getting out from under Alan Moore’s Jerusalem, which has pinned me under 1300 pages of stop-and-start bedtime reading since the first of the year. I remembered that I’d already hauled three or four books to Canada with me, and that I try to buy only things I will use (and right away at that). Thugs and adventurers from around the world might be willing to kill their mothers for the Maltese Falcon … but sorry, Mr. Hammett, back on the shelf you go.

why the long face, Bogie?

I had high hopes the comic shop would make my NerdWalk worthwhile, but you can already see where this is going, can’t you? The shop was fine — no different than others of the better breed, with plenty of stock, clean, well-lit, a friendly staff. But. You know the but, right? I’m a digital guy and (despite giving it a go recently) I don’t do monthly comics any more. Omnibuses are nice, and all, but they’re expensive, and why did I drop a grand on an iPad Pro if I was going to be buying big reprint books? And etc. and etc.

I came home empty-handed, pleased that I’d stuck to my frugal ways, but a bit depressed with this fresh evidence that whatever it is I’m seeking right now, it isn’t something I’ll find in a shop. 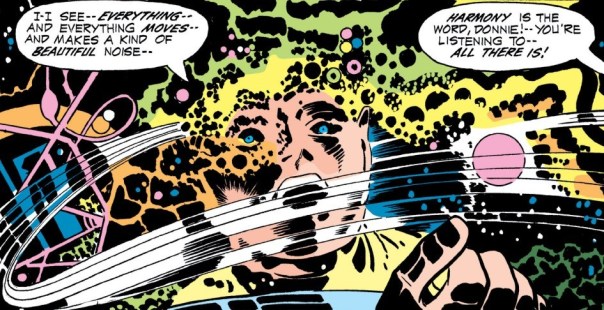 enlightenment — when you least expect it!

So I buckled down and spent another week as a grownup.

I woke up the following Saturday to a surprise — sunlight. It was supposed to rain all weekend, but here was unexpected sun. That the sun was still up when I dragged out of bed well after noon left me no option — I had to get out for a walk. Despite the previous week’s disappointment, I felt the itch to do another NerdWalk. If nothing else, those shops would give me a destination. I needed a haircut, and I remembered a barber next to the horror shop. Plus, I kept thinking about that Boris Karloff poster.

The horror shop improved with reduced expectations. Nothing had changed in the preceding week — I expect I could have come back after a year and found things the same. Actually, though, something had changed. I had changed. I wasn’t comparing everything to Hollywood in the 70s. Now I was just a guy who wasn’t so uptight about spending a nickel and who thought it might be fun to get some art for my apartment, a humble geek pleased to support a local merchant mad enough to make a go of “horror shop owner” as his career.

I remembered that the pleasure of a geek shop isn’t that it is some Aladdin cave of wonders — it is the simple miracle that it exists at all.

The walk home was a little awkward, with those sleeved posters flapping around in the wind, but not too terrible.

I got my miles in. I got some sun. My attic retreat is a bit more nerdy. My NerdWalk expectations are properly calibrated, and now I’m looking forward to walking down for a haircut once a month or so, and dropping by the horror shop to see what strange new temptations have mushroomed up in my absence. Maybe I’ll go back to the comics shop, or give the used bookstores a second chance, and see if anyone has adopted that Maltese Falcon. I think I even saw a place where I could buy pizza by the slice.

All I need is a sleazy movie theater showing Enter The Dragon and I will be twelve years old again. For the length of a NerdWalk, at least.

Thanks for reading! It’s good to get Longbox Graveyard going again. I plan to get back to monthly publication, but stating your plans is a way to hear God laugh.

← First Issues Comics Sale!
Tell A Tale of The Guardians of The Galaxy! →