Super-Blog Team-Up returns with a Doctor Strange-driven look at magic in comics! Now, Halloween was last week, so I’m a couple days late for Dracula, but with his movie out this week, I’m right on time for Doctor Strange … and it’s always time for Bronze Age Marvel here at Longbox Graveyard. So let’s jump right in as Doctor Strange battles Dracula, Lord of Vampires! 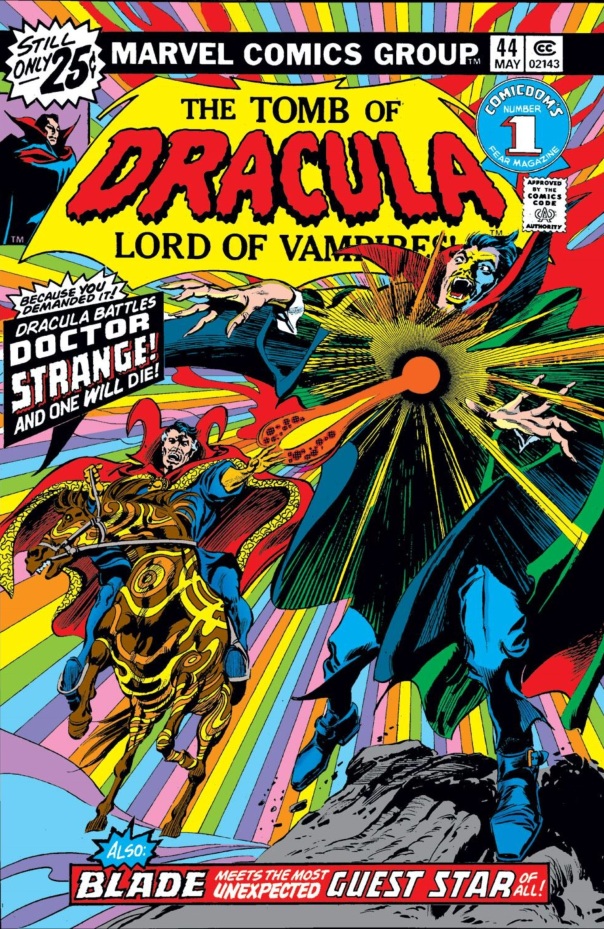 This two-part crossover began in Tomb of Dracula #44, smack-dab in the middle of the classic run by Marv Wolfman, Gene Colan, and Tom Palmer. I’ve sung the praises of Tomb of Dracula here at Longbox Graveyard before (twice!) — it really might have been the finest Marvel comic of its age. And one of the reasons the book worked so well was that writer and editor Marv Wolfman largely kept Dracula and his tales sequestered from the rest of the Marvel Universe. While Drac would encounter Spider-Man and Thor in other titles, Marv jealously guarded the door of Dracula’s own book, ceding to editorial pressure to more closely connect Tomb of Dracula with the Marvel Universe only through crossovers with otherworldly and supernatural characters like Silver Surfer, Brother Voodoo, and (in our case) Doctor Strange!

The first part of the tale, written by Marv Wolfman, opened with Strange mourning the death of his faithful manservant, Wong, beneath the flashing fangs of a vampire! 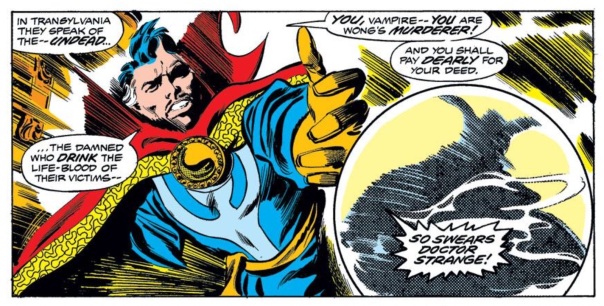 But this wasn’t just any vampire — this was Dracula, the Lord of Vampires, as Strange discovered when his sorcery allowed him to experience Wong’s final moments.

Harnessing the fathomless powers of the All-Seeing Eye of Agamotto (which then, as now, could do about anything the writer needed it to do), Doctor Strange tracked the “life-patterns” of Dracula from the scene of the crime to Dracula’s lair in Boston.

I love how Colan’s “camera” pushes in on Dracula, starting with his open coffin, then Dracula in repose, and then Dracula alert to Strange’s intrusion. Looking at this sequence, did you “see” Dracula’s eyes snap open between the last two panels? That’s the magic of comics, boys and girls — like Scott McCloud noted, comics are as much about what you don’t see between the panels as what you see in the panels themselves.

But this battle between Dracula and Strange wasn’t the usual Marvel Comics Fist City beat-down, and it wasn’t even a garden-variety Doctor Strange ectoplasmic duel of ghosts.

No, to battle Dracula, Strange invoked the “Images of Ikonn” to delve into Dracula’s “passions and fears,” taking Dracula back to the moment his mortal self fell on the battlefield in a cavalry duel with Turkish invaders.

It’s kind of dirty pool, to be honest. 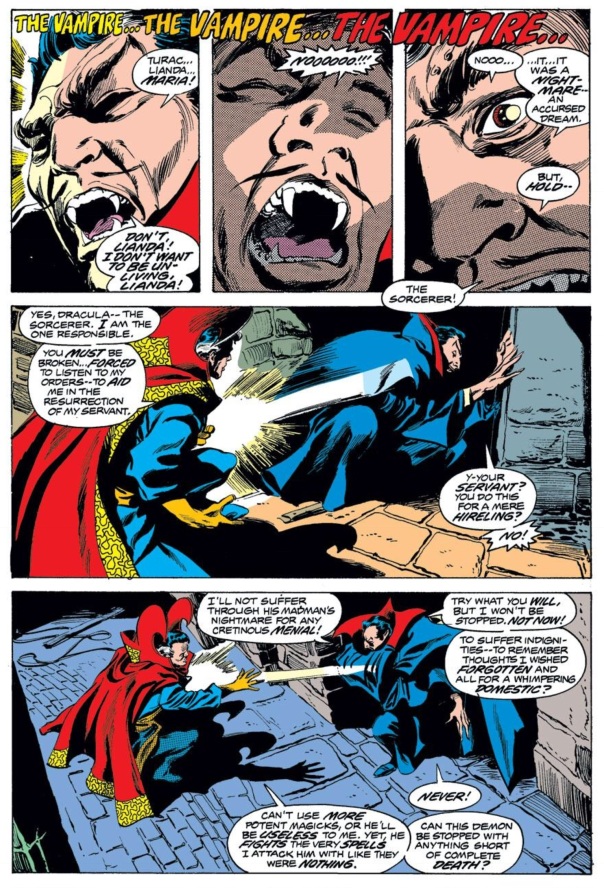 For a couple panels, there, we could almost sympathize with Dracula, and this was intentional. Marv Wolfman considered Dracula the “protagonist” of Tomb of Dracula, rather than the hero, but as readers we still needed to get on board with Dracula, and moments like this served to humanize him. We see Dracula as a mortal terrified of his pending (un)death, we see his noble sacrifice in defense of his homeland, and can kind of feel bad for him … but it doesn’t take much for Dracula to revert to form, showing the dark side of his noble nature with his incredulity that this conflict originated with the death of “… a mere hireling … a cretinous menial … a whimpering domestic.”

Taken aback by Dracula’s sudden recovery — and reluctant to use his “more potent magics” for fear of rendering Dracula incapable of restoring Wong to life — Doctor Strange was quickly mesmerized by Dracula.

How’s that for a vintage Marvel shock ending? Doctor Strange is dead? Say it isn’t so!

Fortunately, we needn’t wait even one week to see how this one turns out … the tale continued in Doctor Strange #14!

While this issue was written by Steve Englehart (who firmly put his stamp on the story, as we shall see), the book was illustrated by the self-same team of Colan and Palmer, and also edited by Marv Wolfman, resulting in an unusually coherent crossover, at least by Marvel standards.

The issue opened with Dracula gloating over his fallen foe, casting Strange’s body into a dungeon, where he might rot until rising, three days later, as Dracula’s undead slave.

But in his arrogance, Dracula didn’t reckon that Doctor Strange might be “no stranger to death,” as we learn that Strange escaped death by leaving his body instants before Dracula killed him at the end of last issue. But now, Strange was trapped outside his body, in astral form, with only three days to concoct a solution to his dilemma.

So what did Strange do?

Why, he thought, of course!

But all the thinking in the world didn’t solve Doc’s trouble. After trying to distract Dracula with visions and spells — and nearly catching Dracula out in the daylight — Strange was still a helpless, disembodied spectator when Dracula returned three days later. But Dracula was taking no chances, and in an odd reversal of roles, he sought to put a final end to the undead Doctor Strange with a stake through the heart!

Right on cue, Strange rose as a vampire, and we finally got some fist-and-fang action, as Dracula battled with a thing that was not-quite-Strange: Doctor Strange’s body, given in to dark vampiric impulses, while Strange’s conscience was helpless to intervene.

And it didn’t take long for Dracula to gain the upper hand against a Doctor Strange reduced to bestial impulses.

I love it when Drac calls someone a “clod.” If your boss calls you a clod — or “cretin,” another favorite — then he’s probably a super-villian

It’s when Dracula had Doctor Strange on the ropes that something intriguing and even a little profound occurred. When Dracula asserted himself as “Lord” while strangling the life from Strange, from the depths of his possessed soul, Doctor Strange called on the power of the Christian god to save his life! 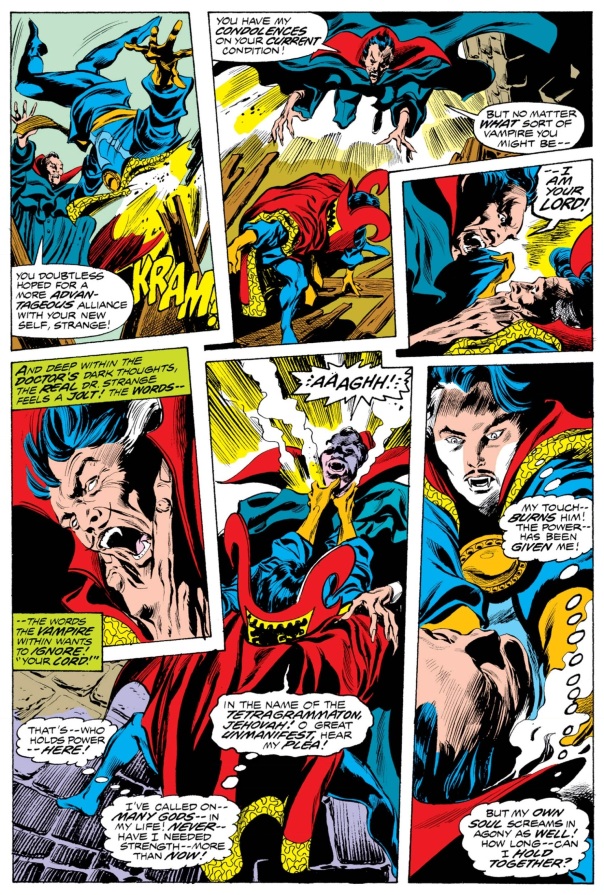 It’s a bold turn of events, and something Steve Englehart didn’t shy away from — he once featured God Himself in a Doctor Strange story, then authored a bogus fan letter to deflect scrutiny — but what’s most interesting to me about this moment is what it asks about Doctor Strange’s own spirituality.

Does Doctor Strange believe in the Christian god, or is He just another deity in the Rolodex, to be invoked like Cyttorak or Vishanti? In his moment of greatest extremis, it is the Christian god that Strange turns to for salvation. Is Strange a man of faith, or is he just happy to use the best tool at hand?

Either way, that cross-like burst of light sure did the job … 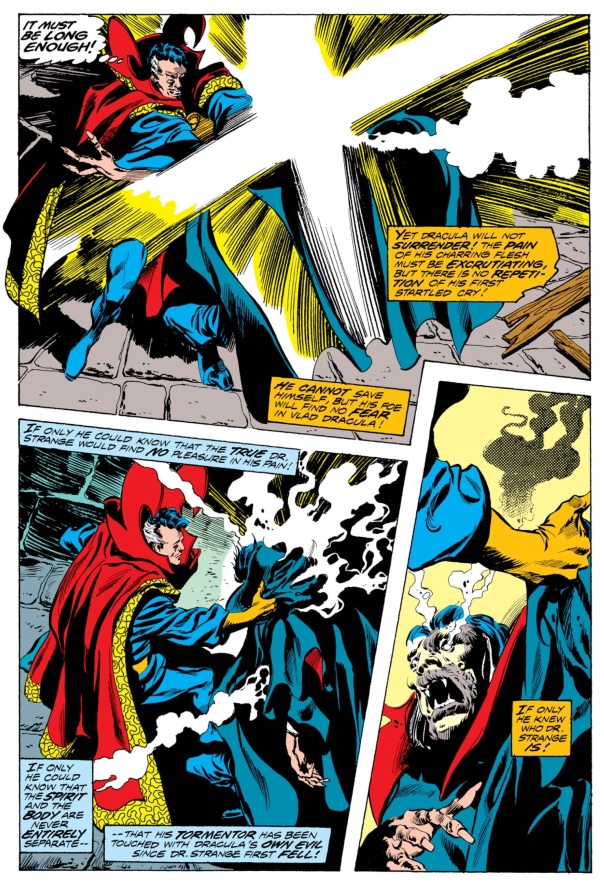 Strange’s body and soul become one again even as Dracula is sent down to defeat, but Englehart implies that the will and even the cruelty required to overcome Dracula’s evil doesn’t come entirely from the divine force Strange invoked — that the “… true Dr. Strange would find no pleasure in his (Dracula’s) pain … that his tormentor (Strange) has been touched with Dracula’s own evil …” This conclusion points to an (ahem) strange duality, with the power of God getting Strange back on his feet, but Dracula’s own dark power of evil being the special sauce that let Strange finish the deed and kill Dracula for all time.

(Or at least until the next issue of Tomb of Dracula!)

And with Strange’s (and Wong’s) souls miraculously restored through Dracula’s death (could Drac have died for their sins? Nah …), that brings this tale to a close, and with it this installment of Longbox Graveyard!

It’s been awhile since I posted here, and it feels good! I hope to make this a more regular occurrence — please let me know what you think of this story and Steve Englehart’s Strange cosmology in the comments section below!

But, before you go — it took the awesome power of Super-Blog Team-Up to wake Longbox Graveyard from its Odinsleep … assuming you view this as a welcome development, please pay your thanks forward by visiting these other Super-Blog Team-Up articles, all looking at some form of “Strange” Magic!

NEXT: #165 I Shopped At An Amazon Brick And Mortar Book Store