X-Men: Apocalypse arrives in theaters this week, and while reviews have been mixed, there’s no denying that the X-Men have become a major movie franchise, with a half-dozen films so far, and plenty more on the way. It’s hard to believe these many movies began with a single comic series published by Marvel a half-century ago! 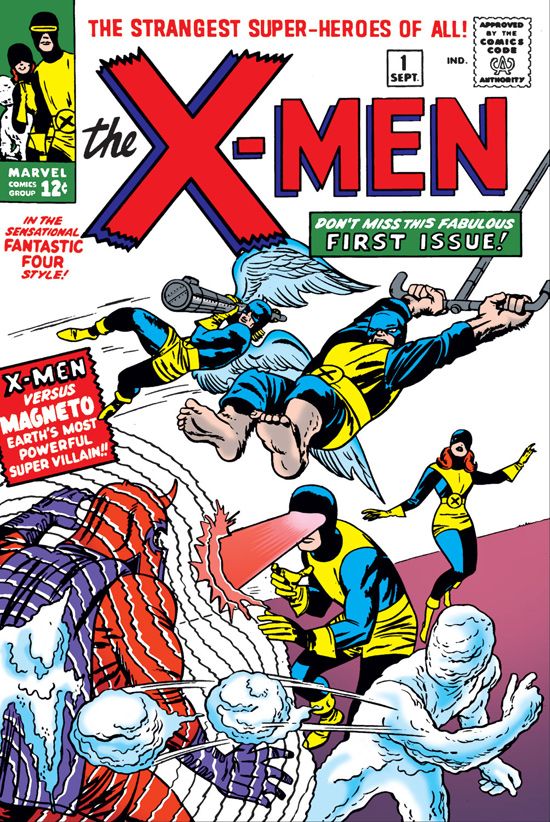 I recently re-read the first several issues of X-Men, and it was fascinating to see where and how this modern franchise was born. In celebration of the X-Men’s pending Apocalypse, I thought it would be fun to look at the team’s Genesis, in terms of the major mutant tropes that emerged in the earliest days of the X-Men!

Now, I have a confession to make. Despite my love of all things Marvel, I’ve never been a huge X-Men fan, and I’ve considered the earliest run of the book among the lesser works of Stan Lee and Jack Kirby. It had been several years since I read this book, and I went into my re-read expecting unsophisticated stories and a lot of growing pains as the X-Men formula gradually took shape.

What surprised me was how much of the modern X-Men storytelling DNA was baked into this series right from the start. And the most magical moment of all was when the most important element of the X-Men ethos flowered into full life in issue #5.

But that’s getting ahead of myself …

The concept of mutant student/heroes was on display right from the start. From the first page of issue #1, class was in session!

And “class,” for the most part, meant the Danger Room … though it wasn’t called by that name quite yet.

Some of the X-Men’s personalities were also on early display. Scott Summers was already a humorless hall monitor. The Beast, conversely, was initially a rough-and-tumble thuggish type … but more about him in a moment.

The X-Men were united in their admiration of the school’s newest pupil — Jean Grey. Maybe not quite united — Bobby Drake, the Iceman, was vocal in his disinterest. I’m certain Stan Lee and Jack Kirby didn’t mean for this to be more than an adolescent male expressing that girls are icky … but given that Bobby has come out as gay in recent Marvel continuity, this makes for an interesting footnote.

Most important, this first issue laid the groundwork for the core element of the X-Men mythos — that mutants are different than humans, and feared by them.

And mutants are feared with good reason! That’s right, there are evil mutants, too … And right on cue, we get a gloriously deranged Magneto, ranting about Homo Superior.

Our heroes put Magneto to flight, which earns them the appreciation of the Army. While hinted at earlier, that critical element of the X-Men — that society hates all mutants, good or evil, just for being mutants — hasn’t quite coalesced yet. 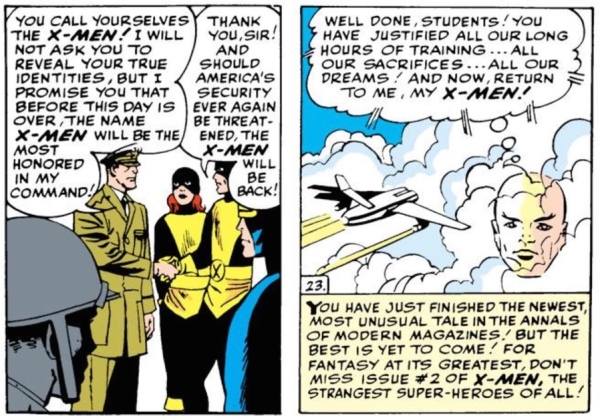 Issue #2 further wedded the X-Men with the mainstream. Cyclops and Iceman received the kind of welcome normally reserved for the likes of the Fantastic Four …

And Professor X was working directly with the F.B.I. to capture the Vanisher, communicating via some high-tech telepathic gizmo. (It might be easier to use the phone next time, Chuck!) 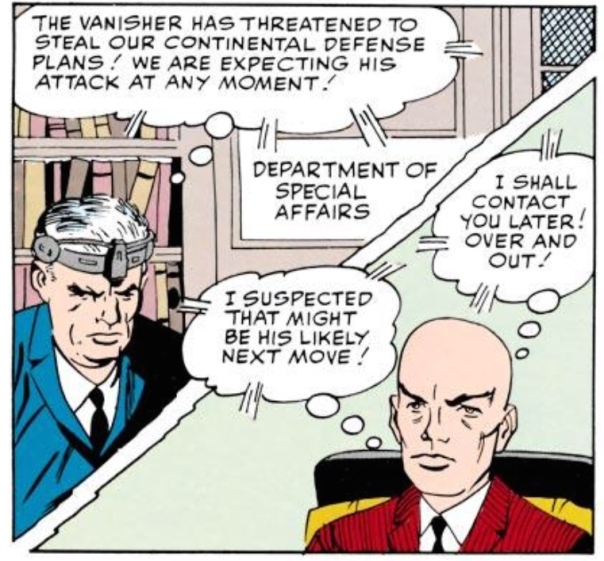 But there was one bit of X-Men lore that got well and truly locked in this issue — the Danger Room got its name!

Issue #3 saw the X-Men’s mission of reaching out to the world’s mutants start to come into focus, though the way Professor X was shown to do it was kind of creepy.

The Mutant-Of-The-Month was the Blob. It was amusing that Professor X had no “Plan B” if someone had the temerity of turning down an invitation to the X-Men. Someone might take a dim view of risking his neck in the Danger Room and getting bossed around by Scott Summers? Inconceivable!

The Blob clearly wasn’t X-Men material. That he used his newfound status to try to take over a circus speaks volumes … and also serves to underscore the emerging good-mutants-versus-bad-mutants theme taking root in the book. 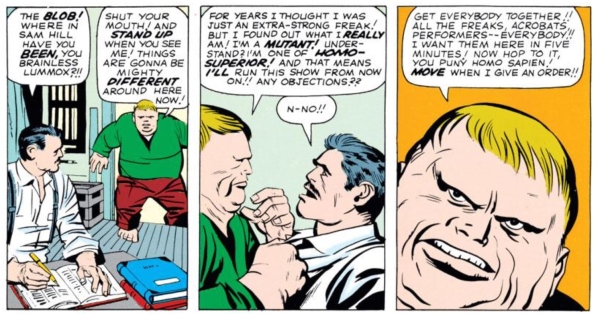 This issue also saw the Beast reinterpreted as educated and sophisticated. In Son of Origins, Stan Lee wrote this change was because the original, rough-hewn Beast seemed too much like The Thing, from the Fantastic Four. And so the Beast started using big words and reading an advanced calculus book with his feet! 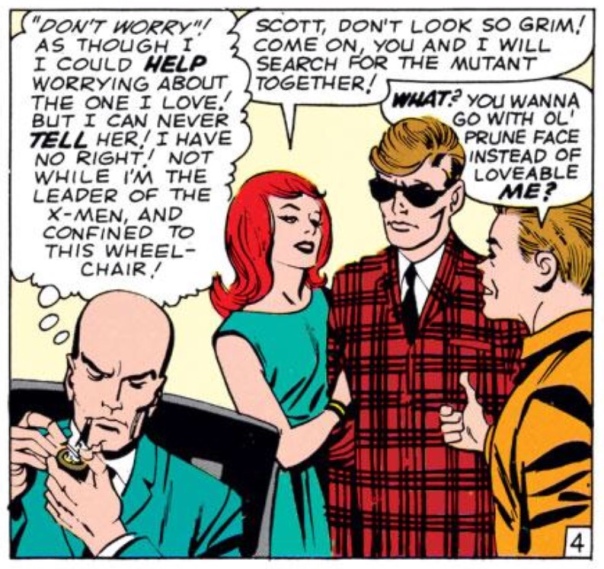 Issue #4 featured the return of Magneto, now in command of the Brotherhood of Evil Mutants! Chief among Magneto’s crew were Quicksilver and the Scarlet Witch — pretty much the odd-mutants-out in Magneto’s Brotherhood, and destined to to respond to the better angels of their natures and become heroes after an issue or two. But they did provide the perfect audience for Magneto to blast off again about the secret mutant war that was becoming the heart of the book.

That plot line continued into Issue #5, where there was a subtle change that really defined what made the X-Men special …

Did you catch it?

“Normal humans fear and distrust anyone with super-mutant powers! … If he’s a fellow mutant, we’ve got to help him! … We’ve got to help anyone who’s in trouble! That’s our oath!”

The friendly men-on-the-street and allied authority figures of the first few issues have given way to an ugly mob that turns against mutants because they are different … while the X-Men emerge as heroes who look out for their own kind, but also defend anyone who is in trouble, even the people who hate them.

With these two panels, the X-Men are well and truly born. The idea that our heroes were mutants, and that they were students in a school, did help to set the book apart right from the start — but these were external elements, and over time they would have been little more than gimmicks. By providing the X-Men with the internal dynamic of being hated by the outside world while still pledging to serve the common good — well, that’s a concept that could (and did!) sustain these heroes for decades to come.

Suddenly, X-Men was more than a superhero fist opera. It was a battle for hearts and minds! And the stakes couldn’t be higher, because that battle was fought inside the team itself — like in issue #8, where Beast stormed off the team after being set-upon by a bigoted mob. 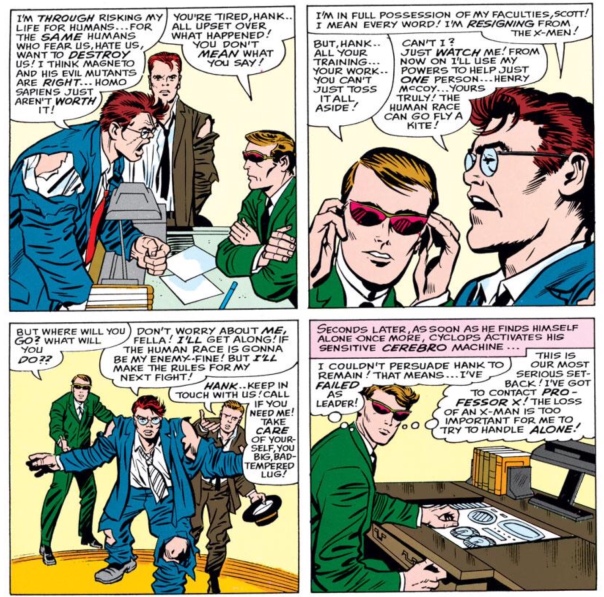 “I think Magneto and his evil mutants are right!”

That’s an argument we’ve been having in X-Men to this day.

This is interesting stuff! Our four-color world is suddenly cast in shades of grey. And while it would still be a decade before the X-Men as we know them today really came together …

… you can still trace the genesis of this beloved Marvel super-team to those first, at-times-awkward issues by Stan Lee and Jack Kirby. Was there anything those two guys couldn’t do?

And has there ever been a longer-gestating comic book hit than the X-Men? The book was ten years in the wilderness before it turned into a phenomenon with that new team, above — ten years where the series flirted with cancellation, and was even a reprint book for a time. The reintroduction of the X-Men under Len Wein and Dave Cockrum (and Chris Claremont, who took the ball and ran with it) was pitch-perfect, using the core ideas and history of series as a jumping-off point, and introducing a colorful and (mostly) new cast of characters that connected with the audience in ways the originals never quite managed.

Given Marvel’s nature — and the necessity of keeping those trademarks fresh — I expect the X-Men would have continued to get times at bat even if the 1974 series had fizzled, but that would have been no guarantee of success. How many times has Marvel tried (and failed) to make us fall in love with the Inhumans? Deathlok, Blade, Ghost Rider … every couple years, these characters get a chance to seize the spotlight, but they’ve never pulled it off, certainly not to the degree the X-Men have enjoyed. In terms of unlikely success, I expect only the Guardians of the Galaxy rank higher in Marvel’s oeuvre, and while the Guardians used a clever comics reboot as a springboard for their success, that property has really been more of a movie phenomenon than a comic book success.

Anyway, it just goes to show that sometimes it take awhile to get it right … and that you can’t rush success. The idea and the moment have to meet, and even then, you need a lot of luck. But hope springs eternal, and one of the pleasures of being a comics fan is watching a tertiary book like X-Men or the Guardians turn into a runaway success. It’s the kind of thing that inspires collectors to hang on to even their most obscure comic books — you never know when some lame old first issue is going to turn into solid gold.

(And personally, I’m keeping my fingers crossed for the Invaders, Son of Satan, and the Legion of Monsters!)

NEXT MONTH: #161 The Superman Novels of Elliot S! Maggin