Fire And Water: The Human Torch vs. Sub-Mariner!

It’s time for another Super-Blog Team-Up, where Longbox Graveyard joins with pop culture blogs from around the world to celebrate a particular comics trope. This time, in honor of this week’s release of Captain America: Civil War (and also Batman v Superman, I suppose), we’re looking at great “Versus” comics events! 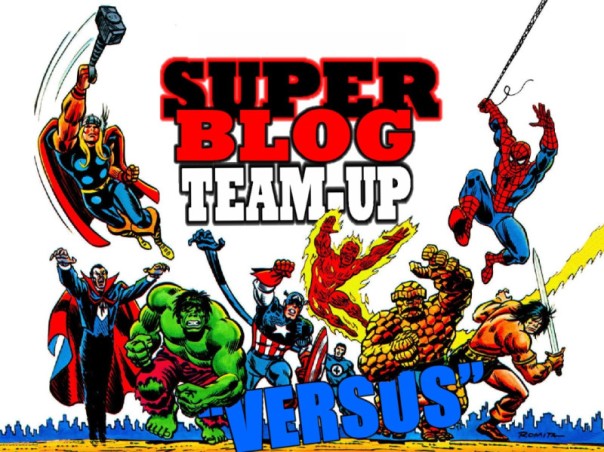 For my contribution, I went all the way back to the source … to the summer of 1940, when the Human Torch fought the Sub-Mariner! 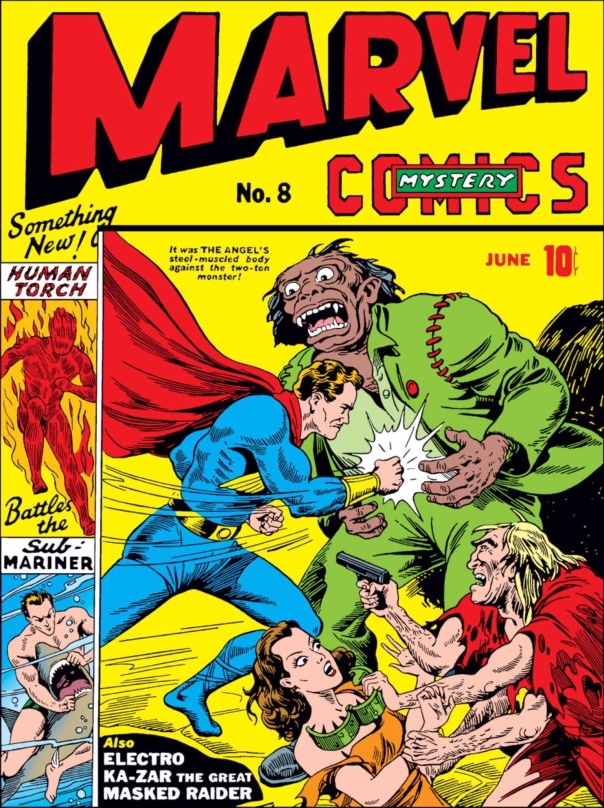 If you were expecting this titanic clash to appear on the cover of Marvel Mystery Comics #8, you could be excused for missing it. It’s easy to overlook that Torch vs. Subby sidebar on the left, especially when the dominant image features some kind of four-armed caveman gunslinger, and the Golden Age Angel coming perilously close to punching a monster below the belt.

But make no mistake — no matter what the cover might show, the first meeting of the Human Torch and the Sub-Mariner was this issue’s main event!

Barely a half-dozen issues old, Sub-Mariner and the Human Torch were still the new kids on the block in 1940, but after a debut that sold nearly a million copies across multiple printings, these two new superheroes had already managed to stand out from the host of Superman imitators hitting the newsstands. It was perhaps because these characters were so different from Superman that they found an audience. Harkening to the noir world of pulp fiction, which was just now yielding in popularity to comics, Sub-Mariner and the Human Torch were anything but an embodiment of truth, justice, and the American way.

To be fair, Superman hadn’t fully evolved into that all-American paragon quite yet, either … but these new characters were still a breed apart. Carl Burgos’ Human Torch was an android who ignited into a creature of living flame when exposed to air, and who was buried alive by fearful humans before breaking free to take vengeance on the world that shunned him. In time, the Torch mastered his emotions, and become a defender of the common good, but his Frankenstein-like origins made for an unpredictable and sometimes menacing hero. And if it was unpredictability and menace that you wanted, you needed to look no further than Bill Everett’s Prince Namor, the Sub-Mariner, an undersea avenger that made war on the human race, and was elevated above outright villainy only by his own noble nature and a slippery moral code that (sometimes) saw Namor doing the right thing.

When our story opened, Namor was in rare form, waging a one-man war of revenge against New York city. Now, the people of New York did send Namor to the electric chair (!) the issue before, having found him guilty, more-or-less, of being a maniac. Disastrously for New Yorkers, a jolt from the chair just awakened the powers of a groggy Namor, who escaped from custody and then made Gotham pay.

What a rampage! Namor got started by flooding the Holland Tunnel with a depth charge … 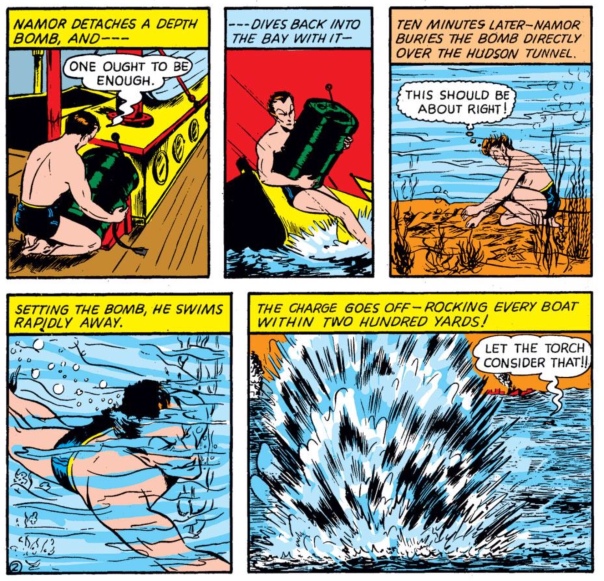 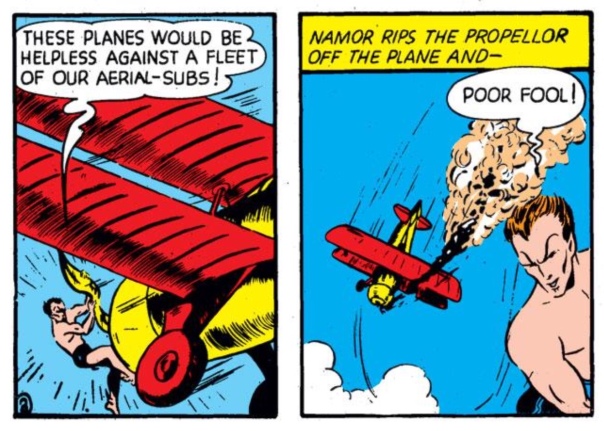 Or the killer (!) elephant. Turn ’em all loose! 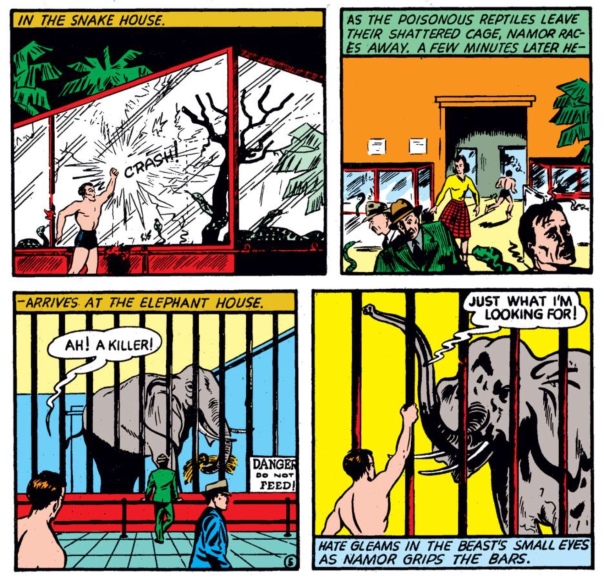 Namor suffered temporary remorse when he saw a baby threatened … 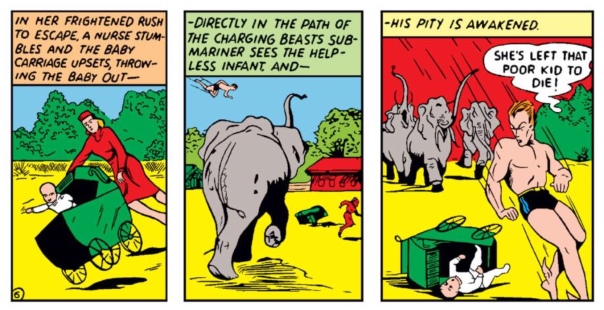 … but no sooner did he deliver the baby to a hospital than he was off to knock the top off the Empire State Building, before wrecking the George Washington Bridge! 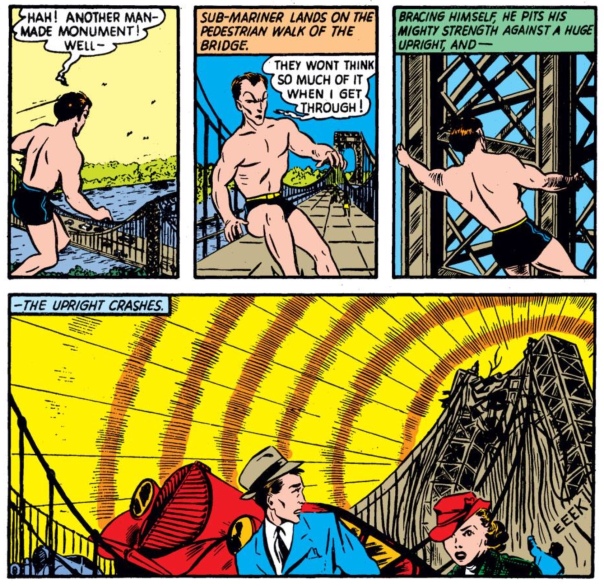 I don’t know about you, but I love this stuff. This was Golden Age comics at their raw, heedless, unbridled best, with little concern for consequences or continuity, or even making much sense from panel to panel. The Sub-Mariner is pissed off, and he’s a freaking force of nature. What more do you need to know?

It’s on the George Washington Bridge where the Human Torch finally catches up with Namor. And … it’s not a great page. At all. There is little drama when these characters finally meet — the action is remote and restrained, the Torch is seen at a distance throughout, and Namor has his back to the audience the whole time.

You can’t win them all. Bill Everett was all of twenty-three when he created this tale. Even Everett couldn’t be a genius all of the time. 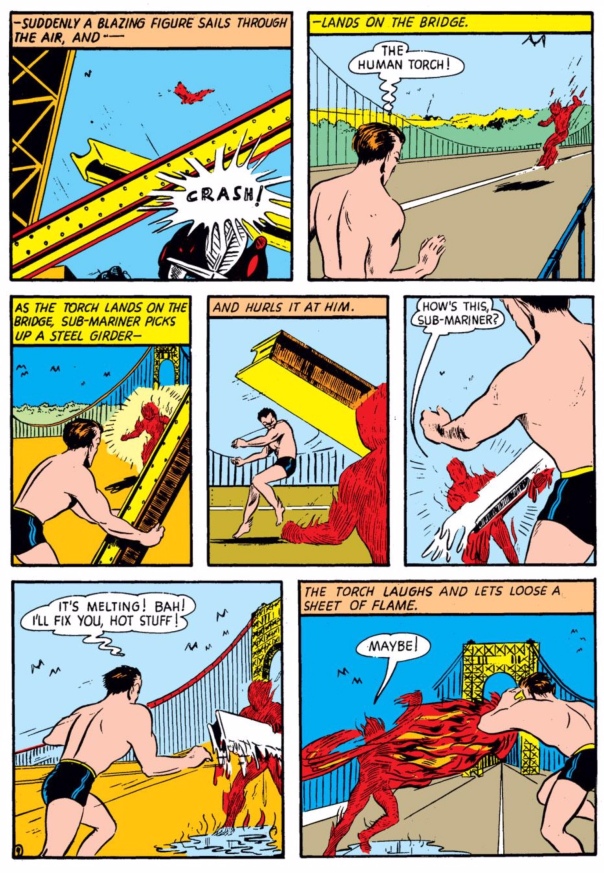 Alex Ross and Kurt Busiek render the meeting in more dynamic terms when they revisited this scene, half a century later, in the pages of Marvels #1. 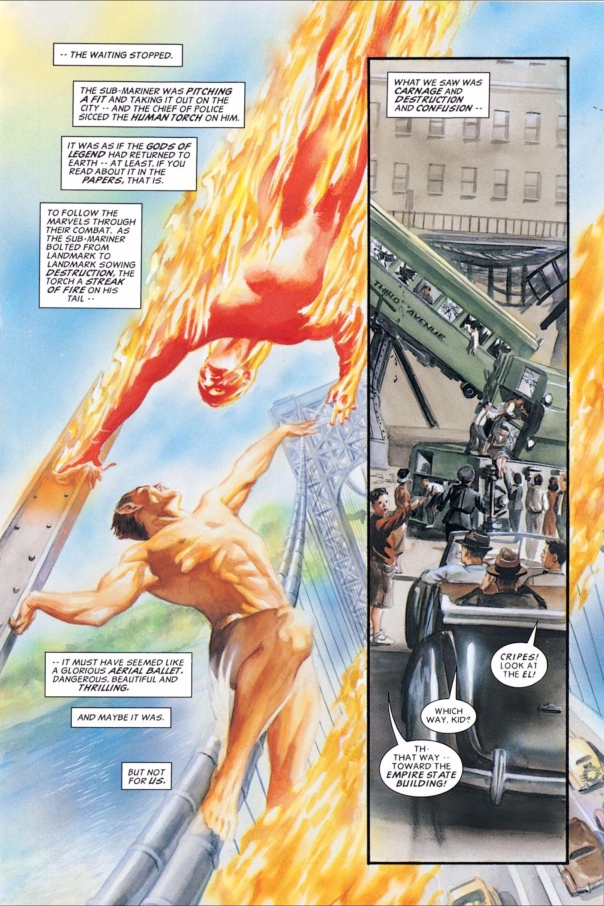 But Ross and Busiek had an advantage — they could look backwards through time. Neither Everett nor fellow twenty-something creator Carl Burgos could have guessed that their crazy comics story was giving birth to the Marvel Universe. Yet you can argue that is exactly what they did — bringing these two characters together, and proving they lived in the same world, where the consequences of each character’s actions would reverberate through each other’s stories. Heroes and anti-heroes, stories told in shades of grey, big events in real cities with hapless human bystanders caught in the crossfire — that’s the Marvel storytelling DNA, right there, decades before Reed, Johnny, Ben, and Sue rocketed into space in the pages of Fantastic Four #1. 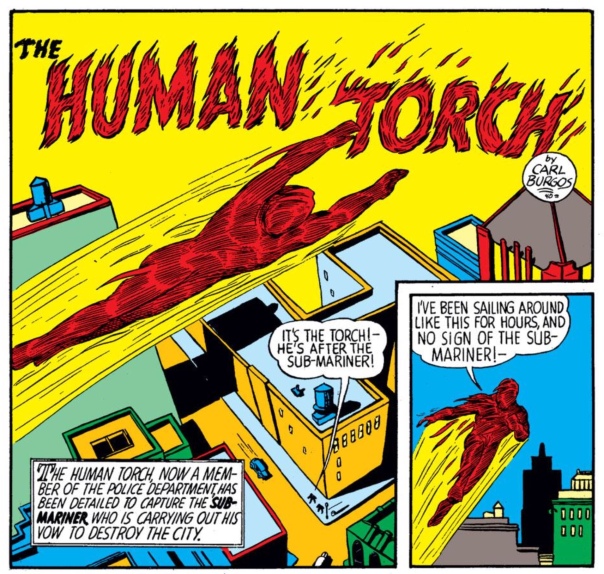 Marvel Mystery Comics was an anthology book, with separate stories of the Torch and Namor in each issue, along with characters like the Angel and Ka-Zar. This team-up was notable in that it spanned two stories in issue #8. Bill Everett’s Sub-Mariner story led the issue, and concluded with that meeting on the bridge — then Carl Burgos’ Human Torch story took over, with the Torch, now a policeman, tasked with capturing Namor on his first day on the job!

Burgos’ entry largely re-told the Everett story, from Torch’s point-of-view, but where Namor was tearing things apart, the Torch was putting them back together, herding zoo animals back into their cages, and dispatching a rampaging gorilla with a flaming right-cross.

Issue #9 continued the clash, with a twenty-two page lead feature by Bill Everett, and (finally) a cover image worthy of this tale … 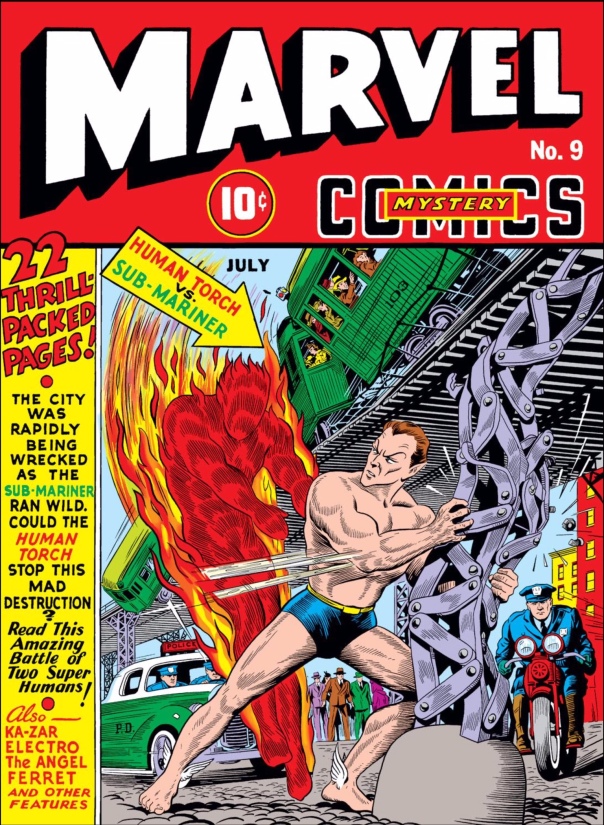 The battle even rated a splash page heralding the fight as the “Battle of the Comic Century!” 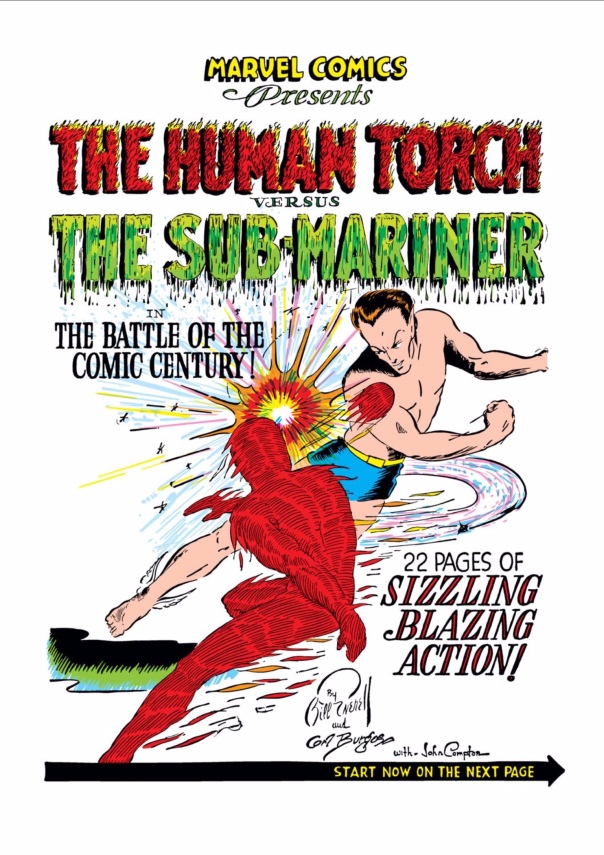 In this second part, the Human Torch was mostly a punching bag — not unreasonable, given that much of the battle took place underwater. 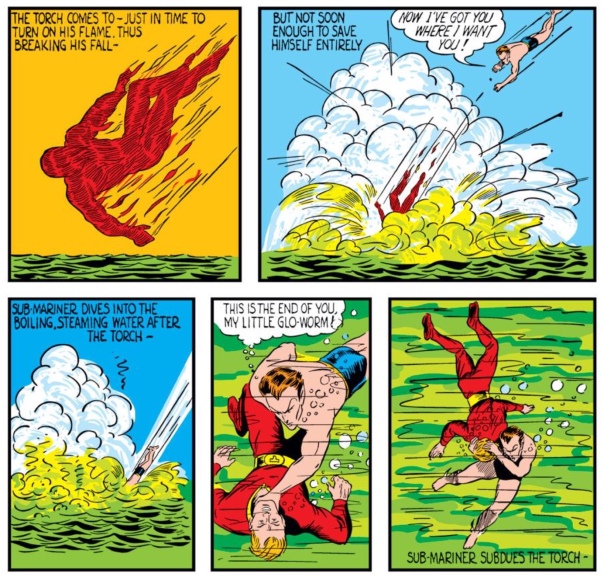 But in a strange turn of events, Namor seemed to lose his mojo — first failing to break a bubble (!) that carried the Torch to the surface, then falling prey to chlorinated reservoir water. So, yeah, Namor is the lord of the seven seas, but keep him away from the water park! 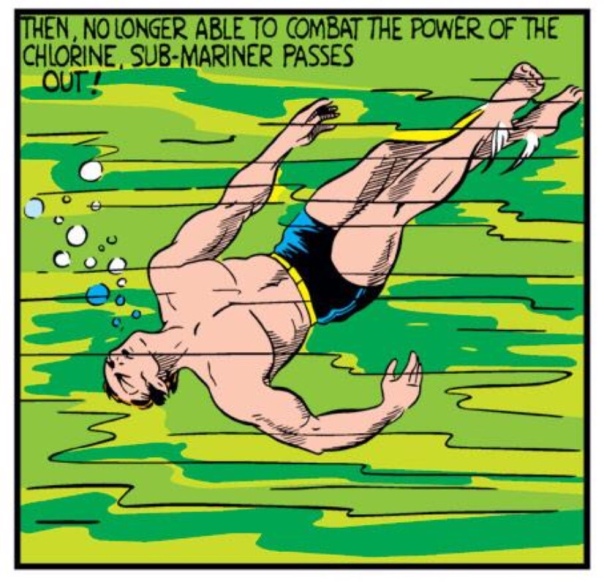 Weakened by chlorine, and with his ankle-wings singed off by the Torch’s flame, Namor escaped by highjacking a plane, and returned to his old homicidal ways, only to think better of his actions in the very next panel. He was nothing if not mercurial, our Namor. 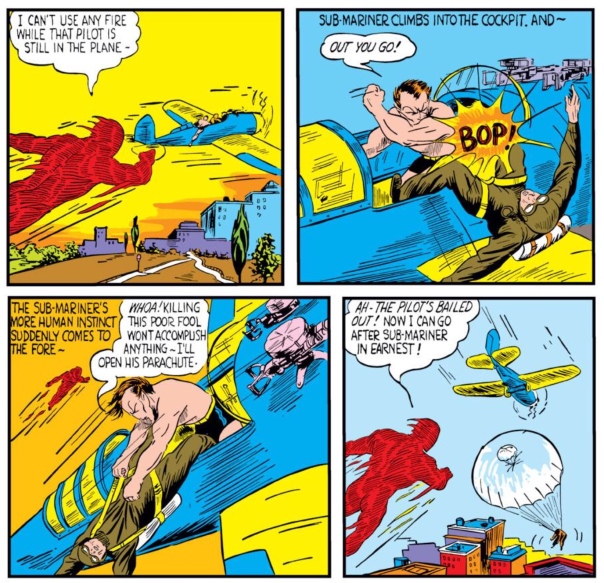 He was also a thinking-man’s madman, rendering the Human Torch powerless by trapping him inside a “translite tube.”

And that’s how issue #9 concluded, with readers encouraged to think how they’d break the stalemate! 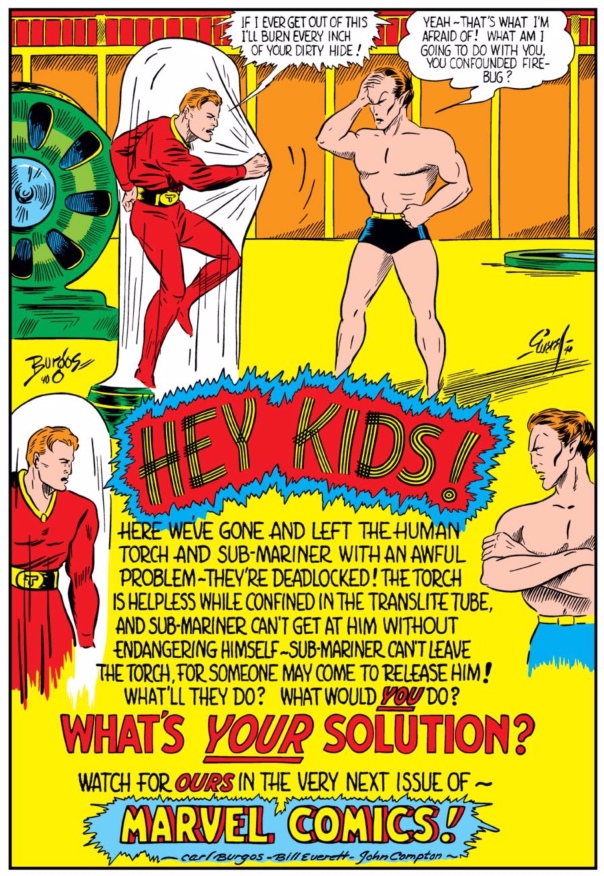 So, who was the greater hero in this hero vs. hero tale — Subby, or the Torch?

How about … neither of them?

The true hero of this story — and about the only person who behaves with an ounce of sense — was policewoman Betty Dean. As Namor’s only friend among the surface-dwellers, and as a member of the police force like the Human Torch, Betty was uniquely qualified to see both sides of this conflict, and propose a peaceful solution.

The problem was that she couldn’t get these meatheads to listen to her.

How many times was Betty supposed to offer the answer before someone got the point? 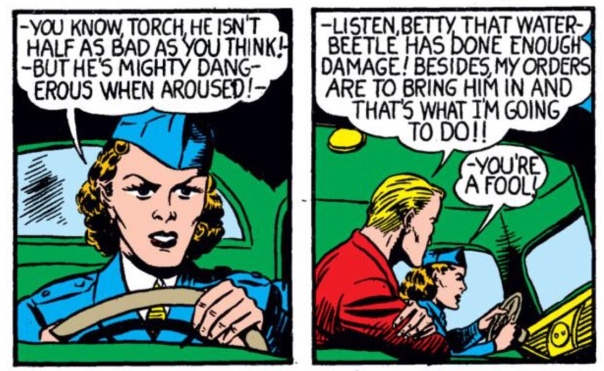 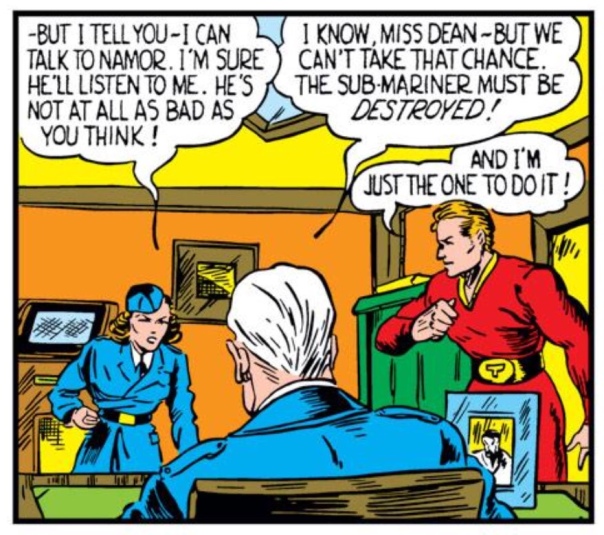 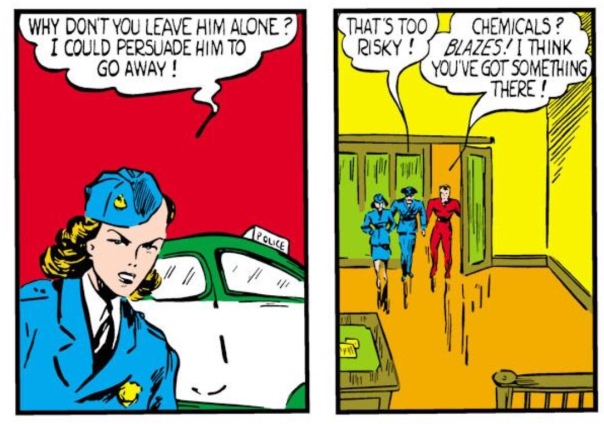 Four times, by my count. Gotta give Betty points for persistence, and bonus points for telling the Torch he was a fool, right from the get-go.

And so the conflict ended sensibly — if not very excitingly — when Betty brokered a peace in the single-page conclusion to the story in Marvel Mystery Comics #10: 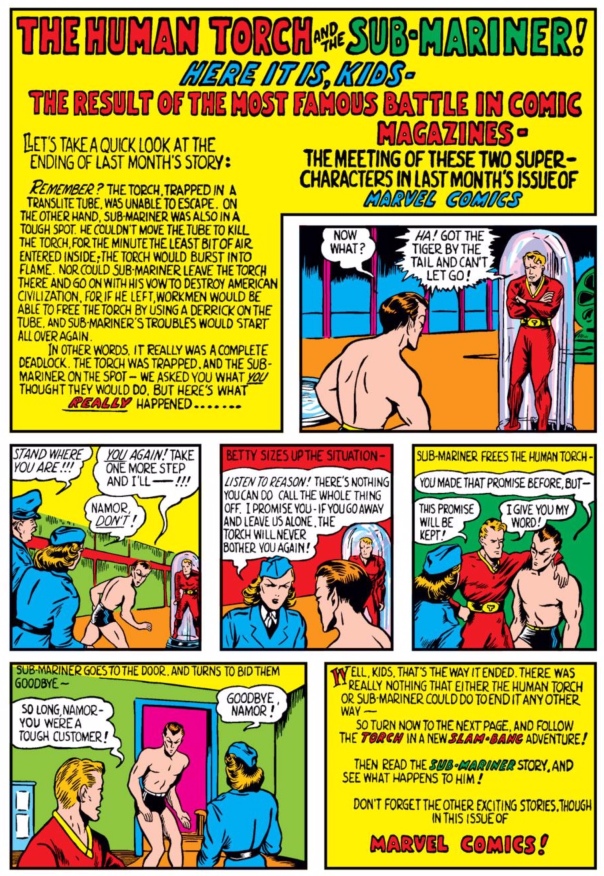 Of course, it would have been cooler if they’d fought.

(And Ross and Busiek seemed to agree).

But what the heck? This was the Golden Age, where anything was possible — even Subby and the Torch turning into the Get-Along Gang because Betty Dean told them to make nice. Never mind what happened to the Empire State Building, or the Holland Tunnel, or the Bronx Zoo! I’d say it was all water under the bridge — but Namor knocked the bridge down, too!

Bridge or no bridge, this story was the high-water mark for Namor’s mayhem. Succeeding stories would mostly see the Sub-Mariner venting his rage on Nazis and Imperial Japanese agents, while the Human Torch fought corruption and gang bosses in New York City.

(Well, true, there was Human Torch #5 where Namor hurled a tidal wave against New York City, but we’ll just forget that ever happened …) 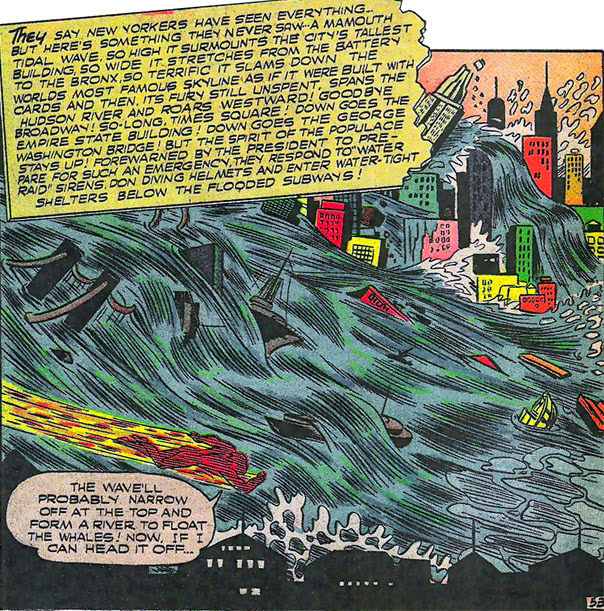 The two heroes teamed again in Marvel Mystery Comics #17 to foil a Nazi attack on America, and modern Marvel continuity would team them with Captain America in the WWII hero squad the Invaders. Namor would go on to become a featured Silver Age character in his own right, after being reintroduced in Fantastic Four #4, while the Human Torch — now identified as the “Original” version, to set him apart from the Fantastic Four’s Johnny Storm — would suffer an even stranger fate in modern Marvel comics, getting bound up in the origin of the Vision, among other things.

But that’s really all too complicated, and serves only to obscure the core nature of these primal characters, who have rarely been better than in this story, in all it’s crude and unvarnished glory. My heart belongs to the Bronze Age, but sometimes the old ways are the best ways, as when fire and water clashed, with no punches pulled, at the dawn of the Marvel Universe!

Thanks for reading! Let me know what you think of the Golden Age Torch and Sub-Mariner in the comments section, below, but not before checking out these other “Versus” features from the Super-Blog Team-Up crew! 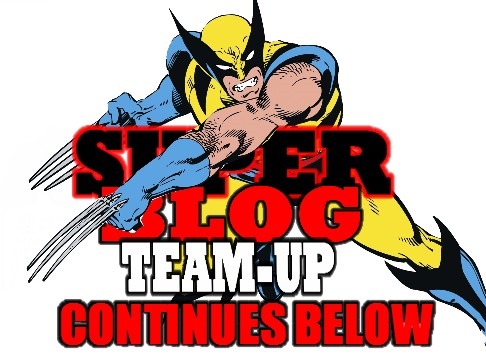