← Grimtooth’s Ultimate Traps Collection
4 Seconds Is On The Air! →

Mars Will Send No More is one of the oldest and most steadfast supporters of Longbox Graveyard, so when I learned he’d published a fiction collection about his Hell-raising space pirate, Meteor Mags, I knew I had to have a copy!

I’m only part way through this volume, but I’ve been consistently delighted with Meteor Mags’ own particular blend of anarchy, optimism, bloodshed, artistry, action, nostalgia, punk rock, and cats! (Can’t forget the cats!)

To celebrate the release of Red Metal At Dawn, I caught up with Matthew Howard, book author (and secret master of Mars)

LBG: Tell us a bit about Meteor Mags and this new collection of stories.

MH: Meteor Mags is a space pirate in the near future where asteroid mining has created a new frontier, one ripe for plundering, smuggling, and rebel rock bands. In ten thematically related stories, we learn Mags is no ordinary pirate. Her reckless violence and exuberant profanity hide a genius-level ability at math and a major musical talent. The daughter of a twentieth-century revolutionary, she’s lived a mysteriously long life, played a major role in the development of gravity control, and has a tail for no reason anyone can explain.

But all of that comes to light as the stories progress. When we first meet Mags on page one, she’s busy raging against the forces of law and order with the help of her new feline friend, Patches. Readers can expect to jump right into action, action, and more action, learning about Mags’ colorful, piratical heritage while braving a 118,000-word hail of bullets. If you can imagine Scorsese or Tarantino directing a film based on a science-fiction comic book, you pretty much have the vibe of Red Metal at Dawn nailed down.

LBG: Tell me about the cocktail of ideas that makes up Meteor Mags. Pirates! Music! Cats! These feel like interests you’ve carried around for a lifetime. How did they coalesce in the creation of Mags?

MH: As soon as you said, “pirates, music, cats,” my ears perked up. That sounds like a fun story to read! Welcome to my fantasy world, where everything I find awesome or interesting becomes something for Mags and her friends to encounter.

Some of them, as you point out, are lifelong interests, like space and stories about animals. Some are adulthood interests, like billiards and Coltrane and pirate radio. And some are things I read about one night and decided to write a story about the next day, like Benelli shotguns and Faraday suits.

Anything from poetry to politics might get drawn into the gravitational pull of the Meteor Mags project. In that regard, it’s heavily influenced by Baron & Rude’s Nexus, where the cocktail of ideas is just overflowing and anything is possible. And the text is only part of the fun, because the creative process involves drawing and music, too. When Mags sings Whipping Boy in Chapter 3, she’s doing a song I worked out on an acoustic guitar as part of writing that story.

LBG: Illustration plays an important role in Red Metal at Dawn, and I know you are inspired by comic book art. Tell me about the picture-and-prose connection of this project. Do your illustrations come first, or do they follow the text, or is it an organic process of one informing the other?

MH: I can’t put anything past you! They totally inform each other. A purely visual idea will inspire stories, and the stories sometimes demand a drawing. When you spend hours drawing lines with a fine-point pen and listening to music, it gives you a chance to ask questions like, “Just where does a cybernetic electric eel come from anyway? And what is its soundtrack?” And then you make up the answers.

Mags’ very first story was meant to be a comic book story anyway. (It’s Part 2 of Chapter 4 now, The Cat and The Cage.) I started working in prose because sequential art is beyond my abilities. So, I imagined comic book panels and then wrote out the action and dialogue in each panel. Then the prose took on an energy of its own, and raised even more questions about the characters, so I ran with it.

MH: Definitely. I think about the camera angles and how a camera would follow the action. I think about whether something is a transitional “panel” on a page, or if it’s a “splash panel” we want to linger on. And, I think about how to describe comic book visual effects like Kirby Krackle. 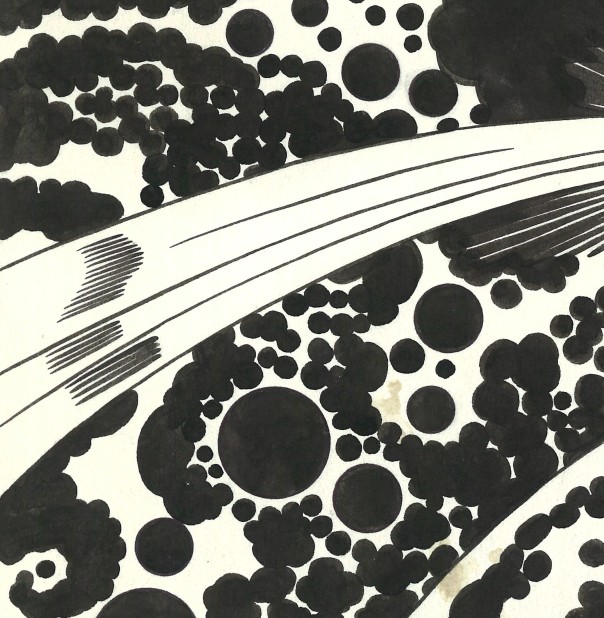 Kirby Krackle, by The King

On the other hand, the narrator spends very little time describing some visual things like facial features and building interiors and spaceship design. The focus on action and dialogue and emotion takes priority over the kind of exposition I find really boring to read. I like to let the action and dialogue establish the settings, rather than break in as narrator to do some long-winded description. I think readers can bring lots of their own imagination that way, too, and personalize their ideas of what a character looks like, for example.

LBG: Do you have any plans to do a Meteor Mags graphic novel?

MH: Wouldn’t that be awesome? We’ll know Mags has “made it” as a character when people start cosplaying her at comic-cons! But seriously, it’s a huge project, and finding the right artist to collaborate with would be so important. Sometimes I think I’d rather license another studio to bring Meteor Mags to life in serialized comic book form, because I really want to get back to writing the next book!

MH: Red Metal at Dawn ends on an ominous note, less than two weeks before Mags’ birthday party in 2029. Mags and her friends want to record an album and introduce the biggest technological revolution since gravity control. But with the forces of law and order teaming up with hostile space lizards to destroy her, Mags had better be ready for the fight of her life.

Plus, we’ll be joining Mags and her Gramma in the twentieth century again to learn about the development of the GravGens and the relationship between these two powerful women.

But that’s far from the end of the stories. I’m aiming to have a novel-length collection come out every year, with no end in sight. Anyone who wants to keep posted on new stories and illustrations can join the resistance at MeteorMags.com!

Get your copy of Red Metal At Dawn on Amazon (print, Kindle) or on the iTunes Store. (In case you can’t tell, Red Metal At Dawn is intended for mature readers). And remember to visit Meteor Mags for the latest space-pirate news, and Mars Will Send No More for awesome comic book goodness!

Hoist high the Jolly Roger, crank up the volume, and tell them Longbox Graveyard sent you! 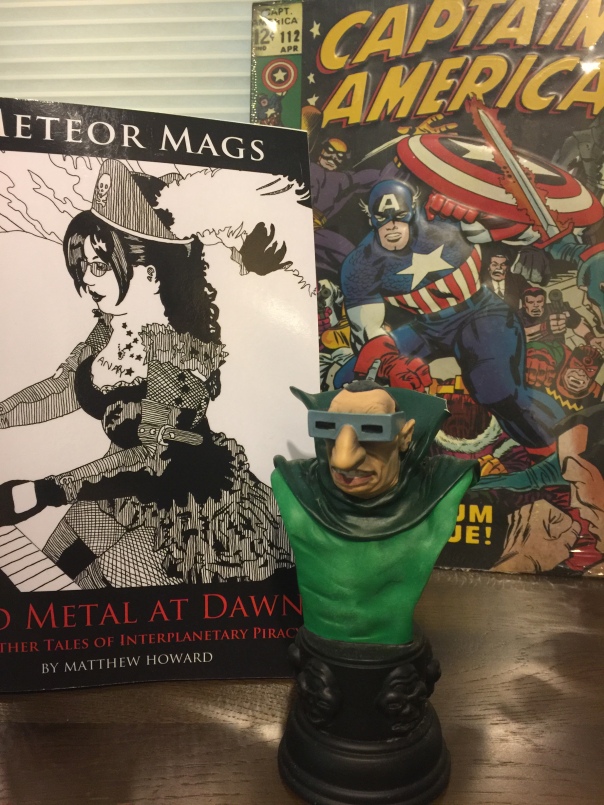 your humble correspondent’s copy of Red Metal At Dawn is approved by both Captain America AND the Mole Man — that’s what we call a four-quadrant property here at Longbox Graveyard!

Posted on February 22, 2016, in Other Media and tagged Mars Will Send No More, Matthew Howard, Meteor Mags. Bookmark the permalink. 4 Comments.

← Grimtooth’s Ultimate Traps Collection
4 Seconds Is On The Air! →