← The Core of the Four
How To Reboot The Fantastic Four →

It’s been three-and-a-half years since I reviewed Marvel Digital Comics Unlimited. I’ve been meaning to post an update for some time, and as I’ve been on vacation these past few weeks — and using the service a lot in my downtime — now seems the ideal time!

(For the TL:DR-types in the audience — I still enthusiastically endorse this service! For those wanting a bit more detail, I offer brief and updated impressions below!) 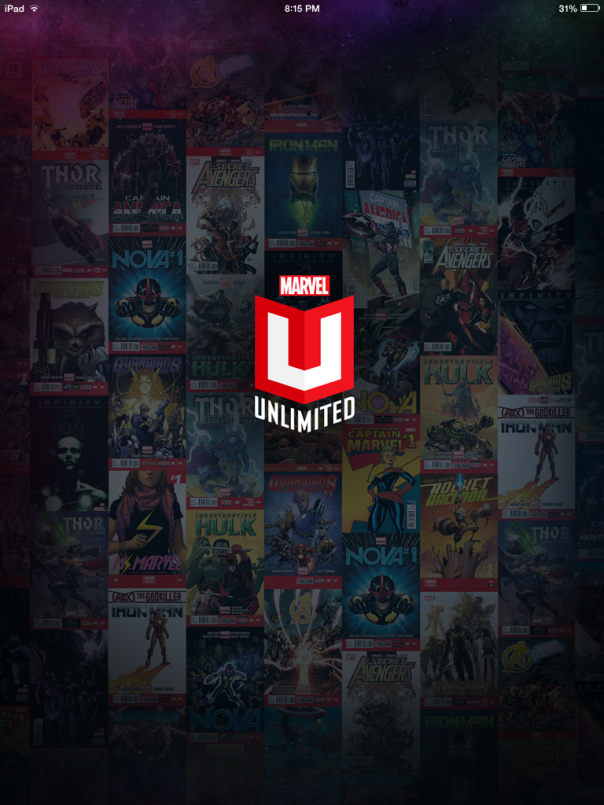 First off, the service has a new name — it is now simply Marvel Unlimited, which is snappier, but no less deceptive, as the service is still limited, though considerably improved over my original review.

The single greatest improvement in the service was a rebuild that dispensed with Flash and went cross-platform. That’s right, now I can use Marvel Unlimited on my tablet, which dispenses with about a third of my original criticism. Marvel Unlimited’s “smart panel” system isn’t quite so sharp as Comixology’s, but I find single-page mode on an iPad serves me just fine, given that I can pinch/zoom in on anything I want to see in greater detail. The service has been of great value in capturing images for use here at Longbox Graveyard (and the absence of a similar service accounts for much of the relatively paucity of DC Comics features here at my blog … it takes a lot more effort and expense to read DC product in electronic form).

The updated app came with some under-the-hood improvements, too, resulting in faster search and (generally) better stability. The physical search process also seems improved, though some of this might be down to my familiarity with the system, or just lowered expectations. My sense is that Marvel has been cleaning up their search metadata behind-the-scenes, but I haven’t run any benchmark tests, so you are on your own if a routine search turns up twelve separate entries for Don Heck (horrors!).

A very welcome addition is the option to search by date, which lets me set the Wayback Machine for (say) 1978 and see all the comics on offer for that year. I LOVE this feature, as it lets me dive directly into eras of interest, and even kinda-sorta read books in the order they came out, should I wish to experience a past year on a month-to-month basis. This is an indispensable feature — the kind that makes me wonder how I ever went without it. Well done!

The “Must Reads” search workaround I mentioned in my previous review is no longer available (at least on tablet, which is the only place I use this service now) — in its place is a “Library” option, which is supposed to let you download up to twelve comics at a time to read offline, a theoretically useful feature for plane or car trips.

I say, “theoretically,” because I can’t get the bloody thing to work.

Kind of damning to read instructions about how I can read comics offline on the same screen that chastises me for not having an internet connection, no? This may well be down to user error. Or maybe it just flat out doesn’t work.

Otherwise, the experience has improved in every way. Upon completing an issue, the option is available to jump directly to the next issue in line, a very welcome feature for long series re-reads. The ability to rate books or try to share them with friends is gone, and un-missed. 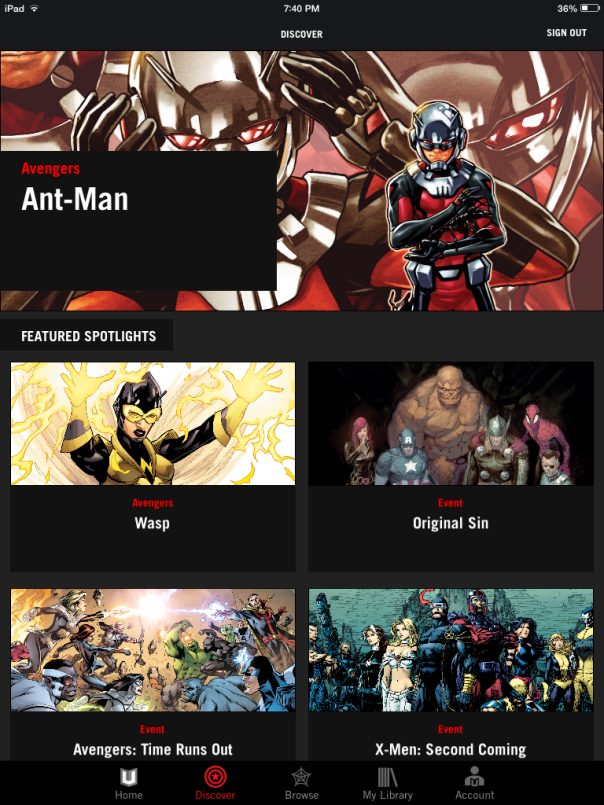 The front-end has nice new features like spotlight sections, with the most recently-released content displayed front-and-center (and alerts about new content rolling onto the system can also be pushed to you via email updates).

Which brings me to …

Content is still king on this app — everything I lauded in my original review of the service is still here, plus seemingly every new book Marvel has published since, with the significant caveat that the system lags approximately six months behind print. You can think of Marvel Unlimited as the home video release of theatrical movies … and just as with the movies, if you can wean yourself of seeing everything when it comes out day-and-date, you can enjoy a lot of content for a fraction of the price.

For your humble narrator — stuck as I am in the year of 1978 — being “only” six month behind the times is so far into the future that it gives me a nosebleed! In other words, I’m fine with it, even for new books. Like many readers, I am looking forward to Marvel’s Even-Newer-And-This-Time-We-Mean-It relaunch … but I will be enjoying it in the Spring, instead of the Fall!

very much looking forward to this … eventually

Archival gaps have been slower to close. Marvel’s Star Wars books recently appeared on the service, but frustrating omissions from decades past remain (I am still flummoxed that Marvel’s monster books from the 70s are so few and far between). Very occasionally I will get notice that new issues of an old book have been filled in, but mostly I’ve adjusted my expectations and use the service for reading newer issues. 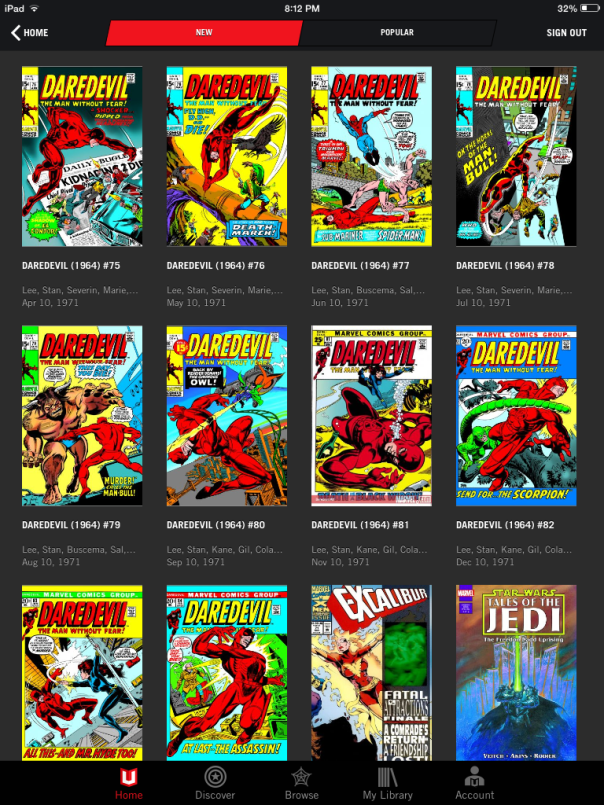 Marvel Unlimited helped me come to terms with my conflicted feelings about Brian Michael Bendis by reading his work in long digital binges (where he shines) — I even bit the bullet and detoured into Battle of the Atom when it interrupted my long 40-issue read of Uncanny X-Men. It would have been nice if those Battle of the Atom issues were threaded one to the next, so I didn’t have to search up each title in order and by hand … but you can’t have everything!

my kingdom for an interactive checklist!

In a lot of ways, my Marvel Unlimited service has been like a gym membership. There have been times when I’ve used it religiously, and then long gaps when I forgotten I’ve paid for the damn thing. If my credit card had aged out and the service had failed to renew, I might not have missed it … until the time came that I wanted to look as some specific issue of such-and-so, when Marvel Unlimited proves itself very much indispensable. I suppose I could cancel out my sub and pop in-and-out with trail memberships from disposable email addresses, but that is a churlish way to treat this service. There is good content here, and I’m happy to pay for it (and I will keep a candle burring in the window in hopes of DC offering a similar platform someday). I might even double-down and get a retina-display iPad specifically for Marvel Unlimited … or better yet, wait on the super-sized tablets Apple supposedly has in the pipeline, which strike me as possibly the best way yet to read digital comics.

But even with my “old” iPad, I am still a fan of Marvel Unlimited; I think it is worth a subscription, and it is certainly worth a tryout for whatever app is native to your device.

And now, if you will excuse me, I need to return to my Bendis-era Uncanny X-Men re-read. It might be 2013 in that particular series, but it’s all new to me!

← The Core of the Four
How To Reboot The Fantastic Four →