The Core of the Four

These are tough times for the World’s Greatest Comic Magazine. The Fantastic Four are conspicuous by their absence from Marvel’s next big reboot, and their new movie is supposed to stink (putting it in good company with the ones that have come before). While the series has enjoyed signature runs under creators like John Byrne and Jonathan Hickman, you could argue that the Fantastic Four went into decline when Jack Kirby left the book with issue #102 in 1970 (if not earlier). 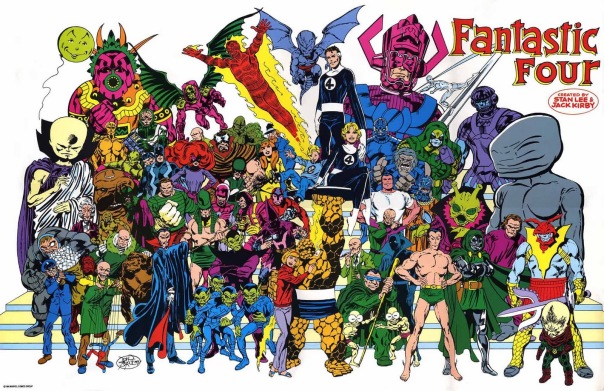 Classic heroes. Great villains. Galaxy-spanning adventures of lasting importance. A sprawling supporting cast that’s better than the headliners of many other books. And yet, today the Fantastic Four feels like a second-tier property (and maybe that’s giving them too much credit). How can Reed, Ben, Johnny, and Sue regain their mojo?

I’m far from an expert on this series, but on the eve of their bound-to-be-disappointing third (fourth?) film outing, I thought I’d look at key aspects of the Fantastic Four — the things that make them special, and the things I think need to be front-and-center in any interpretation of this property. I’m certain I’ll miss a few things (and overstate others), so be sure to give me your impressions, additions, and push-backs in the comments section, below.

But without further apology … here’s what I regard as the Core of the Four!

There is a special magic in the partnering of Mr. Fantastic, the Invisible Woman, the Human Torch, and the Thing. They’re primal elementals … brains, heart, charisma, and brawn … husband, wife, brother, and best friend.

From time to time a member will leave the group, but the Fantastic Four just don’t feel like the Fantastic Four without their four founding members front-and-center. The team has had its share of membership changes and roster shake-ups, but while I like She-Hulk as much as the the next guy, for me the Fantastic Four has to center on the original four canonical characters. The book can and should have a robust supporting cast — but Ben, Reed, Johnny, and Susan have got to hold the center stage. Without these guys, you don’t have the Fantastic Four.

Not Just A World — A Whole Universe

One of the great charms of this series is that it is as at home on Yancy Street as Ego the Living Planet, and everyplace in between. From month to month, a reader shouldn’t be able to guess where an adventure is going to start, or where it is going to lead. This series should have the broadest canvas in comics.

The Fantastic Four can tackle serious threats — you don’t get much more serious than Galactus trying to eat the planet! — but this is a sunlit series long on adventure and … well … fun. It is a rational world where science can solve anything (and cause a few problems along the way); it’s a trivial world where the Fantastic Four are celebrities at the heart of the world’s biggest reality show; it’s a childish world where the Thing and the Torch wreck their headquarters over some silly prank; it’s a flexible world where characters like Doctor Doom and the Impossible Man can share the same stage.

At the core, the Fantastic Four is an unapologetic Silver Age adventure story, a kitchen sink of space gods, bank robbers, killer robots, villainous landlords, mad science, and romantic melodrama. There is angst, disappointment, and heartbreak along the way, but the Fantastic Four isn’t grim, miserable, or violent — it is the story of four optimistic souls who love each other and love having superpowers (even Ben Grimm, who over time has evolved from a wretched man trapped inside a monster into a wise old brawler who is — most of the time — comfortable in his own skin). The Fantastic Four should have fun on their adventures, and their adventures should be fun to read.

The Beating Heart of the Marvel Universe

The Fantastic Four are Marvel’s First Family — they can and should be at the center of everything that happens in the Marvel Universe. Over the decades, the X-Men and (more recently) the Avengers have grown into Marvel’s go-to teams when disaster threatens, but really, it is the Fantastic Four that you want when it is time to get things done. They’re the team with the unimpeachable reputation, with connections around the globe (and around the universe!), with the cutting-edge tech, and the unmatchable reserve of experience and talent for tackling any problem.

They can be diplomats, they can be scientists, they can be explorers, and they can be a wrecking crew with equal aplomb. They’re privately funded and committed to the public good in ways that less organic super teams cannot match. The biggest events of the Marvel Universe — from dimensional rifts to alien invasions to the wedding receptions of super-spouses — really only feel big if they happen to or with the Fantastic Four. That the Fantastic Four have been pushed to the margins of the Marvel Universe is a tragedy for the title, and an even greater loss for Marvel, as it denies the larger part of the heritage that makes Marvel great. Get this book back on the schedule! Free the Fantastic Four!

That’s your core — big adventures with intimate characters. A legacy of heroism and adventure. A sense of destiny and duty. Unbreakable family bonds. Fun! Give me those things, or you’re not giving me the Fantastic Four!

It might seem that I’m advocating for a strictly Silver Age Fantastic Four — and those hundred-odd Silver Age issues by Stan and Jack are still tops in my book — but this needn’t be the case. Sure, I’d love to see a 1960s-era Fantastic Four movie with a Mad Men visual sensibility, but there are some core elements of the original series (like the Cold War competition with “the Reds,” or the sexist portrayal of Sue Storm as a weak and superfluous member of the group) that are best forgotten.

The wildest excesses of the Silver Age can and should likewise be tempered for contemporary audiences. But the soul and spirit of that era should proudly remain at the heart of the Fantastic Four. This is a great property … a great series with a great heritage. All that really remains is for the Fantastic Four (and Marvel!) to recognize that greatness — and embrace it. Depict the Fantastic Four with confidence and swagger and prove they aren’t a relic of a bygone age, and that their greatest adventures are yet to come.

I’m ready to join them! How about you? Give me your own reboot ideas in the comments section, below!