← Death To Advertising!
Happy 4th of July From Longbox Graveyard! →

(Not comics, but close enough).

Sick at home and feeling nostalgic, I watched the first episode of Star Trek: The Next Generation on Netflix. 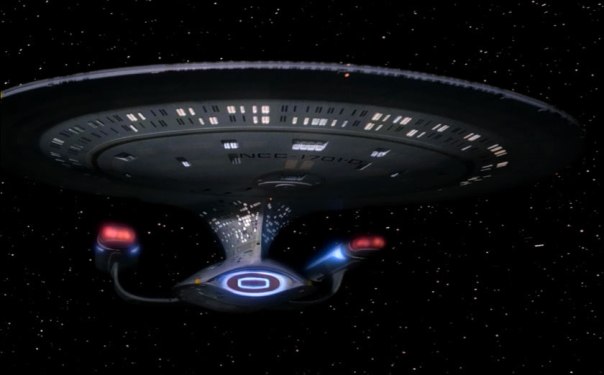 I didn’t like this series when it was first aired. In fact it was a profound disappointment. I was an Original Series guy — and always will be — and this “new” Star Trek did not meet my space opera expectations. I watched an episode or two and checked out.

It was remarkable how much like silly old Original Series Trek this really was. We had John de Lancie swanning around in an Elizabethan captain’s outfit, and a catastrophically bad stunt double standing in for Denise Crosby when she did a little Kirk-Fu on a courtroom full of fur-clad extras that might have walked off the set of The Omega Glory.

The Enterprise was captured by something that looked very much like a shower curtain.

Add to this the usual planet-of-the-week shenanigans and you had a story that might have been as comfortable in 1967 as 1987, albeit one with a substantially larger budget.

It had been long enough that I’d even forgotten about DeForest Kelley’s delightful cameo.

In all it was quite a bit better than I’d remembered, probably because I’ve mellowed these last three decades, and am more willing to take my Star Trek where I find it.

There were things that rankled, of course, like a captain too eager to surrender, and a tiresome doe-eyed empath staring into the middle distance and telling us how much pain she was sensing.

The ship’s bridge looked like the interior of a 1987 Chrysler 5th Avenue, and there were hints of elements that would hurt the Trek franchise in years to come (technobabble and the Holodeck, rocks upon which writers would later wreck themselves). But there were some real advantages, too, like the marvelous Patrick Stewart as Captain Picard, clearly the best actor to ever command a starship, and whom I realize was 47 when this series debuted … he seemed so ancient and distinguished to me then, and now I’ve got 47 five years in my rear-view mirror.

It was very entertaining, and a pleasant surprise. I’ll watch a few more. If there are now suddenly several seasons of mostly-unfamiliar Star Trek ahead of me, then that is a good thing.

Posted on July 1, 2015, in Other Media and tagged Star Trek. Bookmark the permalink. 6 Comments.

← Death To Advertising!
Happy 4th of July From Longbox Graveyard! →