← Between The Pages!
MARCH MODOK MADNESS! →

March Madness Super-Animal Showdown — Round of 16!

The first round of the March Madness Super-Animal Showdown tournament is in the books … and while for the most part the higher seeds advanced (and we had several blowouts), there were still a few mild upsets and one match that went into overtime!

The closest thing to a genuine upset in the first round was #19 seed The Spectacular Spider-Ham taking down poor old Proty (ranked #14) by a 54-46 count. Proty may have been hampered by his unclear status — is he a pet? an alien? — plus his finest years were in the far future of the long lost Silver Age adventures of the Legion of Superheroes, who aren’t exactly a hot ticket right now. The Spectacular Spider-Ham emerges from the first round as the tournament’s “Cinderella,” being the lowest seed still in the tournament.

The favorites carried every other battle by comfortable margins … aside from the dead heat contest between Comet the Superhorse and Monsieur Mallah! This battle wound up in a flat-footed 50-50 tie, so I determined the “overtime” winner by casting my moderator’s vote in favor of the higher seed, Comet (#8). Monsieur Mallah’s fans can now gripe twice — first that they were scandalously under-seeded at #25, and second that they were robbed on the field of play!

Let’s serenade poor Monsieur Mallah as he leaves the tournament, beaten but unbowed!

But there is no time for replay or appeals in the Super-Animal Showdown … we are on to the second round! Cast your votes in the match-ups below! 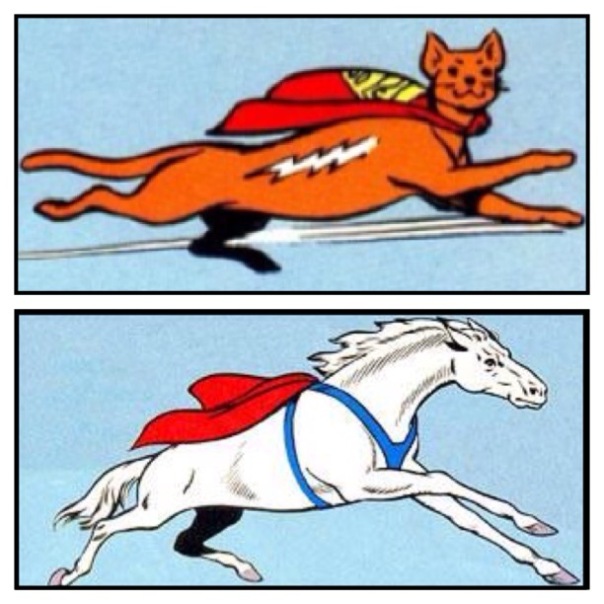 And here’s how the whole field shapes up as we prepare to whittle the field down to the Elite Eight: 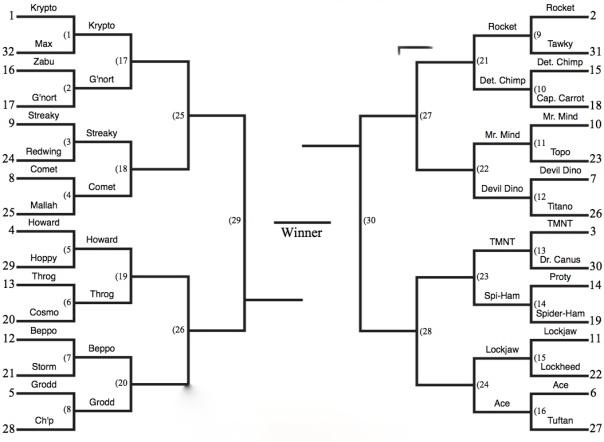 As before, you will have about a week to vote. Last week I actually closed the voting late on Friday, as things had slowed down quite a bit, and I had weekend plans that would have interfered with doing this column on Sunday night. (So there’s another irregularity for Monsieur Mallah to complain about!). This week’s voting may end as soon as Friday, or it may run into the weekend. You never know with the Super-Animal Showdown!

But what is for certain is that this tournament can’t run without your votes … so vote early, and vote often, and tell your friends! This second round is going to see some beloved super-animals bite the dust. Advocate for your favorites, in the comments section below!

← Between The Pages!
MARCH MODOK MADNESS! →