← Days of Future Past
Marvelous Mythology →

Welcome to the Dollar Box, where I look at single comics issues or short runs of books that had an original cover price of a dollar or less. This time I turn my attention to Jack Kirby’s Kamandi — the last boy on Earth! 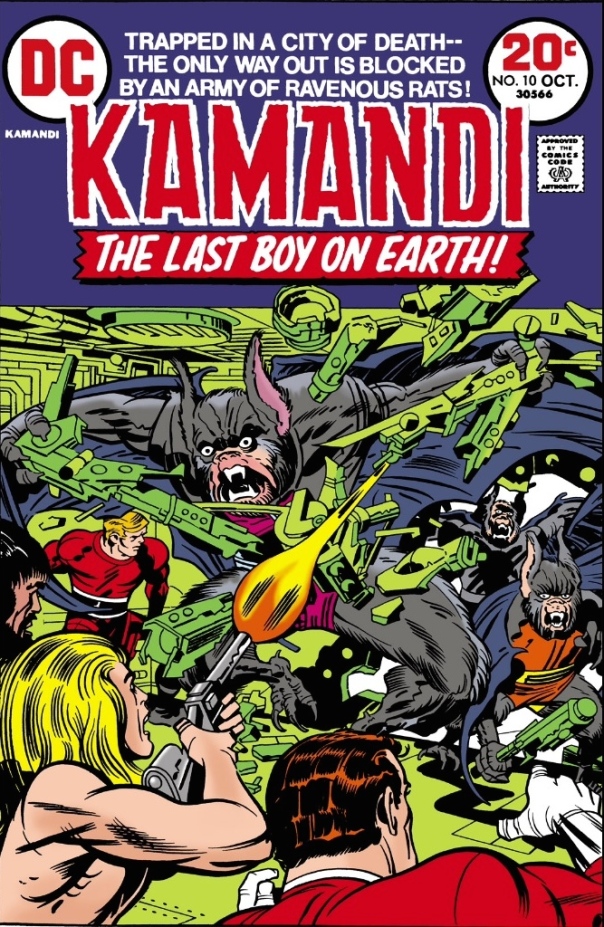 If Wikipedia can be trusted, Kamandi was born when DC Comics failed to land the Planet of the Apes license, and turned to Jack Kirby to create something similar. You can almost imagine the conversation, with Carmine Infantino saying, “Jack, can you do us a Planet of the Apes strip?” and Jack saying, “Never saw the movie — what’s it about?” Carmine: “A ruined future, where men are beasts and humanoid apes rule.” Jack: “Got it!” Of course, Kirby wasn’t going to content himself with drawing a bunch of human actors in ape-face. Jack’s post-apocalyptic world of tomorrow would be ruled by every manner of man/animal hybrid — ape-men (of course), but also dog-men, and tiger-men, and humanoid bats that wear costumes looking a bit like opera capes because, why the heck not? 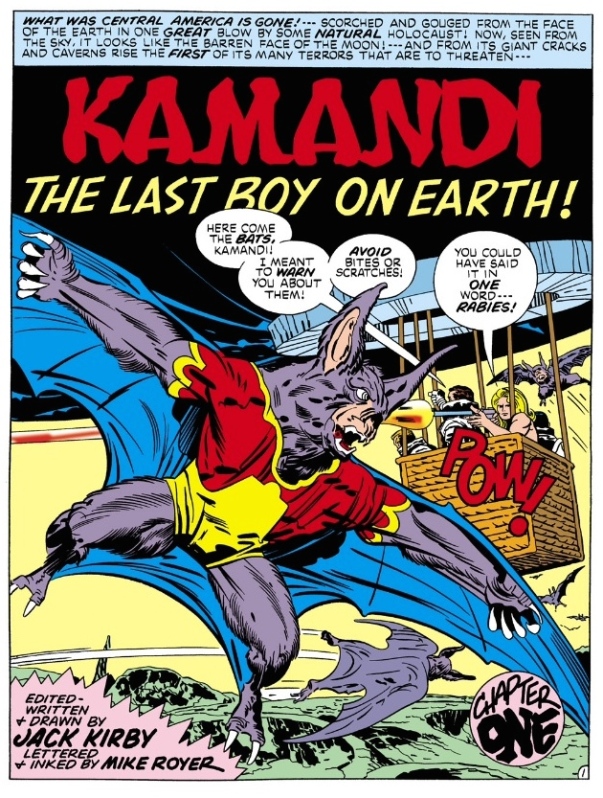 “Why the heck not?” might very well be the subtitle for this whole loopy series, which ran forty issues under Jack Kirby, and almost as long without him, debuting in 1972 before getting wiped out in DC’s own apocalyptic event, the “DC Implosion” of 1978. Kamandi was a wildly imaginative and far-ranging series, but you can’t help but suspect Jack was making it up as he went along. Seemingly every issue is about Kamandi discovering some bizarre splinter of topsy-turvy civilization, getting captured, escaping, being chased, fighting, and then quitting the scene after an issue or three to turn up in Las Vegas or some old department store on the outskirts who-knows-where only to find it overrun by another race of crazy, gunned-up, animal-headed maniacs. Good times!

These are pure adventure comics, and while later storytelling gymnastics would tie the series in with the larger DC Universe — including another Kirby creation, OMAC — I’m not sure these books benefit from close scrutiny. It really is about turning the pages, admiring the art, and wondering what the heck will come next. The stories themselves read like throwbacks to early-20th century adventure fiction, and were pretty clearly pitched at kids — these tales have more in common with Kipling and Edgar Rice Burroughs than they do DC’s 1970s superhero oeuvre. Trying to read a bunch of them in a single sitting will frankly melt your brain. But for a book that you dip into for an issue or two, to get your head turned inside-art and to marvel at Kirby’s sometimes-goofy but always-earnest world building, Kamandi has some real virtues.

Raised in the “Command-D” bunker from which he took his name, and educated by microfilm records of the world-that-was, Kamandi is a blank slate, a prideful and adventurous teenager who thinks with his fists and acts mostly in service to the story’s plot, another call-back to pulpy heroes like Tarzan or Conan the Barbarian. Kamandi lacks the depth of those characters, though, partially because Kirby writes him as a brash teenager archetype, and partly because characterization would crowd out pages better devoted to the Gopher Men of Ohio, or a giant grasshopper grand prix. It’s not that the series is lightweight — for example, Kamandi’s first love meets with a bad end, and it is wrenching to read — it’s just that this isn’t a character-driven series. It’s a spectacle, with Kamandi and a loose collection of supporting characters along for the ride in Jack Kirby’s magical mystery tour of “Earth-AD” — our planet, horrifically contorted by the intentionally ill-defined “Great Disaster.”

Among those supporting characters are three human mutants — Ben Boxer, Steve, and Renzi — who figure prominently in this tale from issues #8 and #9 of Kamandi. The three have the weird power of turning themselves into living metal by clapping their hands to their chests …

… which feels perfectly normal in this world, even a bit pedestrian, and sure, why not, why wouldn’t this prove a survival trait in a world where humanoid bats swarm to attack your hot air balloon as you drift above an abandoned test range?

That guy with this pistol is Ben Boxer, in his non-metallic form, a kind of adult supervision in this series. Ben’s the sort of dashing male adventure figure that Kirby wrote all the time, someone Jack seemed to think would be cool to younger readers, but he mostly feels like your dad. In this particular story, Kamandi has joined up with Ben and the boys to explore the “Tracking Site,” a NASA experiment gone awry (don’t they all?) that was intended to pave the way for man’s conquest of space.

Ben and the boys are revered by the robots that run the place … but of course the robots almost immediately run amok, because what’s the use of drawing robots if they can’t run amok?

But it’s not the robots fault — they’ve been corrupted by The Misfit, a kid of degenerate freak with mental powers, carried around by his robot servants … 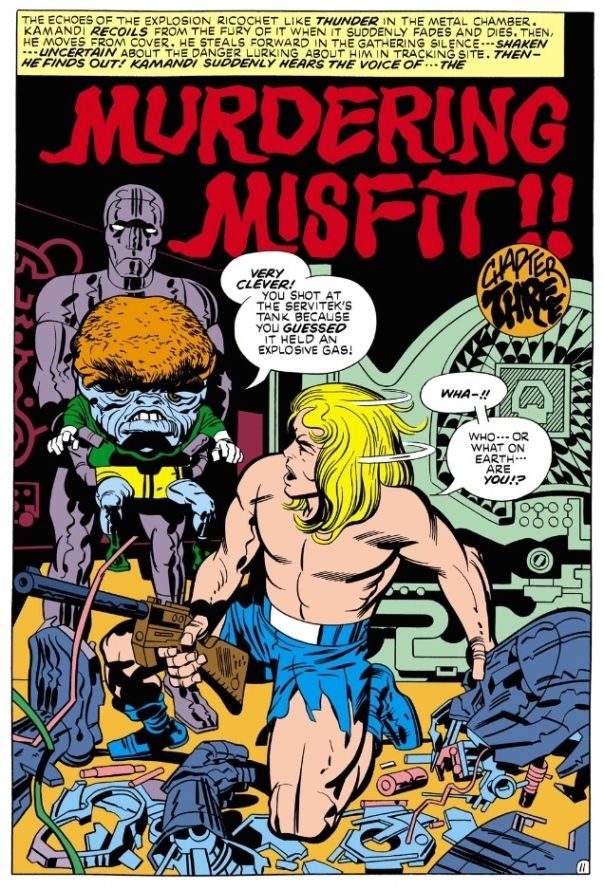 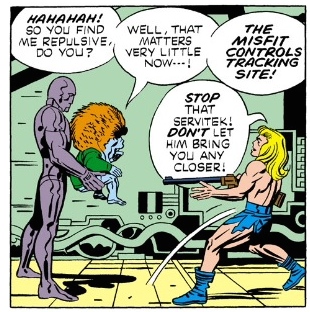 … and here we have another of those pulp throwbacks, as the Misfit and his burly host remind me of Kaldanes and Rykors from Burroughs’ Chessmen of Mars …

(And since I need to sometimes prove I don’t live entirely in the world of 1978, here’s the same big-dumb-guy-carrying-the-little-genius trope from Game of Thrones) 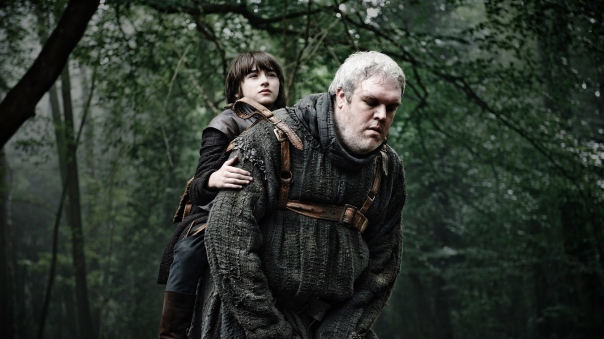 Anyway, this Misfit is a piece of work. He’s got the robots all stirred up, and he seems bent on destroying the world by releasing a killer germ to which he thinks he is somehow immune. And if not for those damn bats, he might have just pulled it off by now!

But the return of Ben Boxer and the boys upsets the Misfit’s plans, and kicks everything into hyperdrive, with bats and robots and mutants brawling all over Tracking Site.

Kamandi is saddled with the little lunatic long enough to learn the Misfit’s sad origin as a failed experiment to breed life that might survive this grim future, and which implies the Misfit may be related to Ben Boxer, a kind of demented half-brother that can’t be killed but needs to be locked in the attic. Certainly, Ben doesn’t seem surprised that the Misfit is primed to do something nasty when let off the leash …

And that nasty thing is nasty indeed — Morticoccus, a truly revolting creation, a malevolent, ambulatory super-germ, a prime example of the loathsome mad science that permeates this series.

To tell the truth, I have no idea what is going on here. Mutants that turn to metal, their evil brain little brother, rabid bat-men, robots, killer germs, none of it makes a lot of sense. And none of that matters! It’s just off-the-hook crazy fun.

Our heroes eventually get their feet under them, and win the day. Kamandi gets points for showing compassion to the Misfit, moving the little creep to a rare moment of gratitude, permitting Kamandi to escape certain doom …

… but the Misfit himself still pays the price, dying in epic fashion as his space-probe sphere rockets into the sky, with its hull breached by those bloody bats just as the killer germ breaks free.

A gruesome ending indeed, and while I’m not sure I buy Kirby’s conclusion that the Earth was the winner, I do know that I thoroughly enjoyed this bizarre tale of bats and germs and robots and the Last Boy on Earth, even if I’ve read it three times and still don’t know what happened! I’m sure I’ll read it again, as I will every issue of Jack Kirby’s weird vision of Earth “After Disaster.”

Issues #9 and #10 of Kamandi had a cover price of twenty cents, but I expect you can find them for around five bucks now, which seems a fair price to pay for a big slice of looney Jack Kirby nostalgia. There’s also an out-of-print omnibus (which commands big bucks), and digital versions through Comixology, where I snagged most of Kirby’s whole run for .99 an issue. But whether you find them in the dollar box or not, keep an eye out for Kirby’s Kamandi — every collection would be enriched by having an issue or two on hand!

← Days of Future Past
Marvelous Mythology →