Days of Future Past

What if everything you knew was wrong? What if one day, you woke up to a nightmare, and knew with a sickening certainty that it was your life that had been the dream? 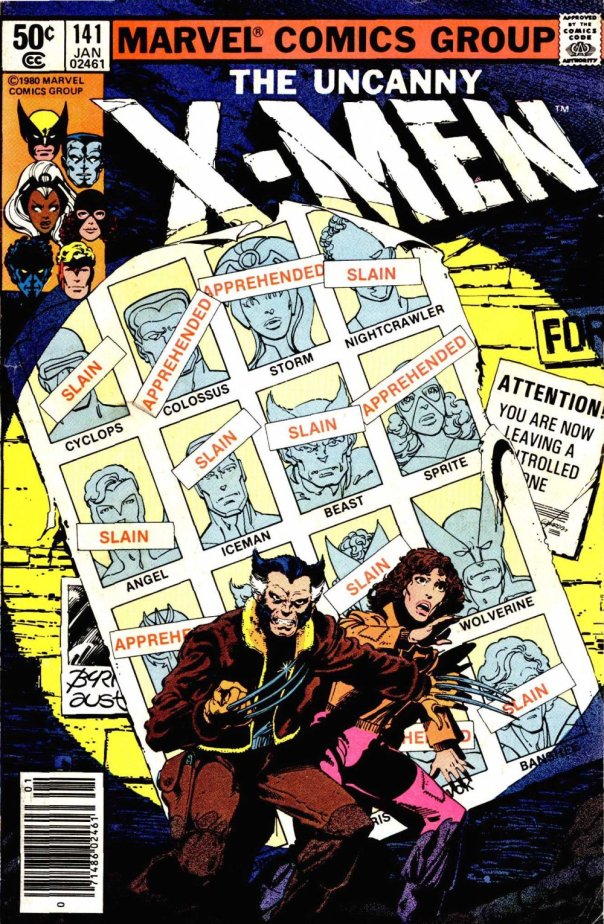 Welcome to Super-Blog Team-Up, where a coterie of comic book bloggers all tackle a similar topic on the same day. This time, we’re looking at alternate realities, and for my subject I’ve chosen the “Days of Future Past” story from Uncanny X-Men #141-142. 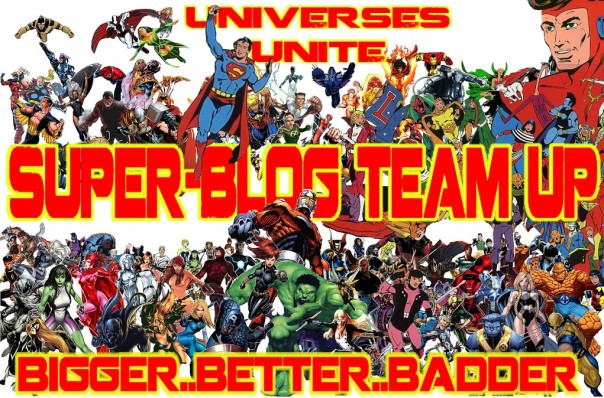 Aside from 1961’s “Flash Of Two Worlds,” which established the DC multiverse, it is hard to think of a more famous alternate reality comic story than Days of Future Past, which changed the way we look at comics, and the reverberations of which are still being felt today, most recently in the 2014 blockbuster installment of Fox’s X-Men movie franchise. 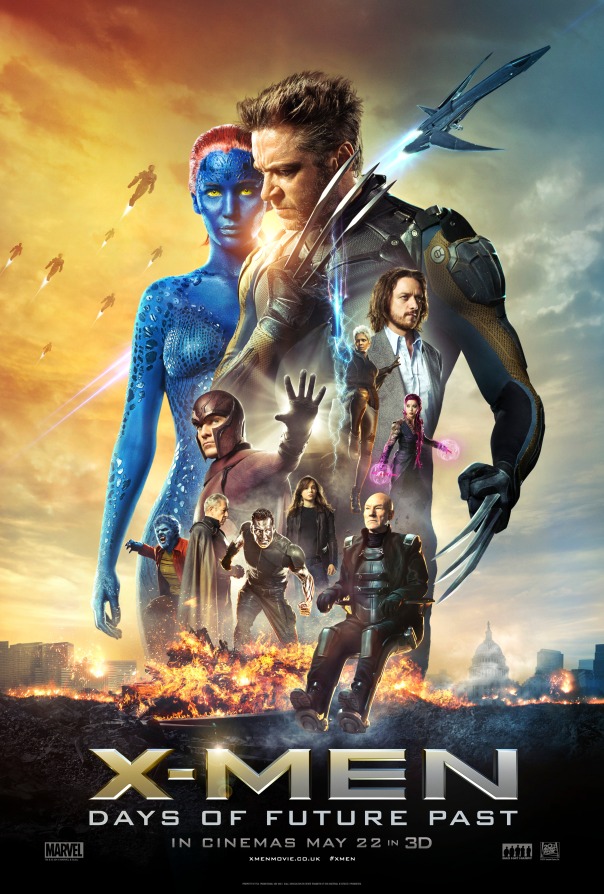 But forget 2014. Let’s go back to the future of 1981, before Diamond Previews or movie trailers or spoilers on the internet might ruin the surprise of what the then far-future world of 2013 held in store for Marvel’s most popular super-team. So celebrated is this story — so often referenced, reprinted, reinterpreted, and imitated — that it is nearly impossible to understand the impact that this cold open had on comics readers who had plucked X-Men #141 off the spinner rack at 7-11. 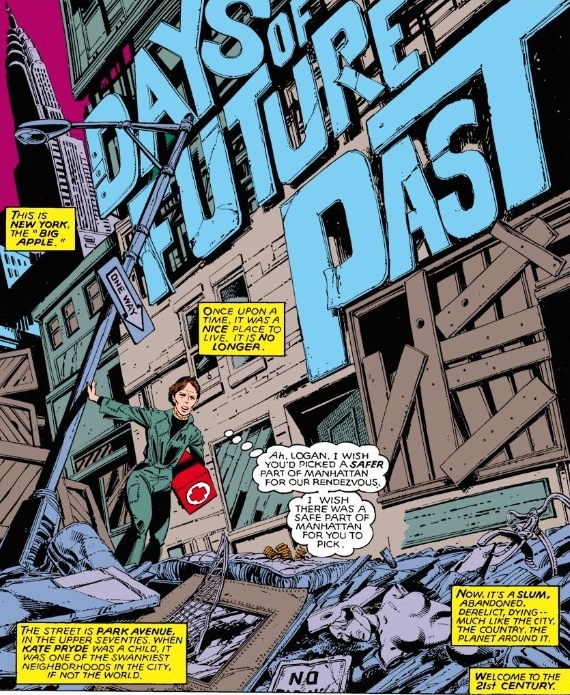 Fans following the series might rightly have feared that they’d missed an issue, but scurrying back to re-read #140 would offer no comfort — the last page of that particular story showed the Blob breaking out of jail, with little indication of an impending dystopian future nightmare, aside from a title slug confirming that, yes, the next issue of X-Men was this very “Days of Future Past.” 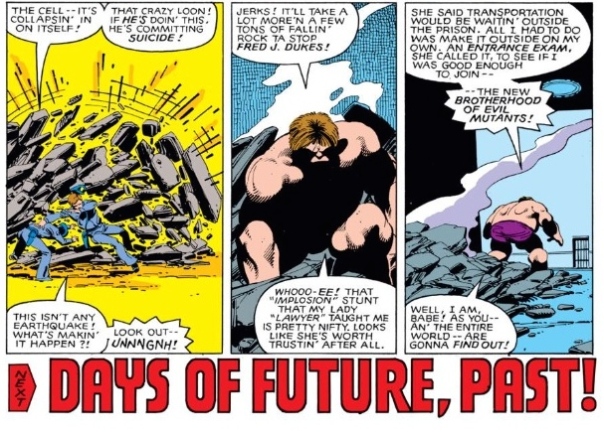 It was the boldest surprise yet from a comic that changed the industry with some of the boldest stories of the 1970s.

Returning from the limbo of being a reprint book with 1975’s Giant-Size X-Men #1, the X-Men took the comics world by storm. Guided by writer Chris Claremont, and illustrated by Dave Cockrum, the X-Men were a breath of fresh mutant air in the Marvel Universe, honoring the history of what was at the time a relatively obscure, tertiary comics property, while at the same time mapping out a vigorous new mutant universe, full of monsters, aliens, conspiracies, and political intrigue. 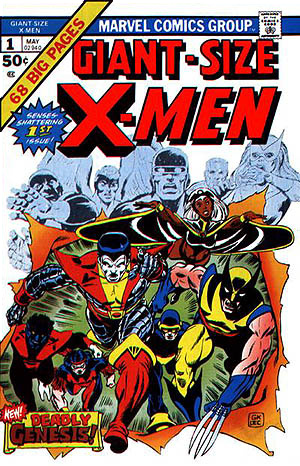 When John Byrne joined the book in issue #108 — in the midst of a superhero space opera that saw the X-Men wrestling with the fate of reality itself — the series kicked into hyperdrive. Though they didn’t always see eye-to-eye, Claremont and Byrne became the Lennon and McCartney of their era, sparking a spectacular creative outburst that brought us the X-Men versus Alpha Flight and the Hellfire Club, some great Magneto stories, an adventure in the Savage Land, and the Death of Jean Grey.

But most memorable of all would be the storyline where everybody dies! 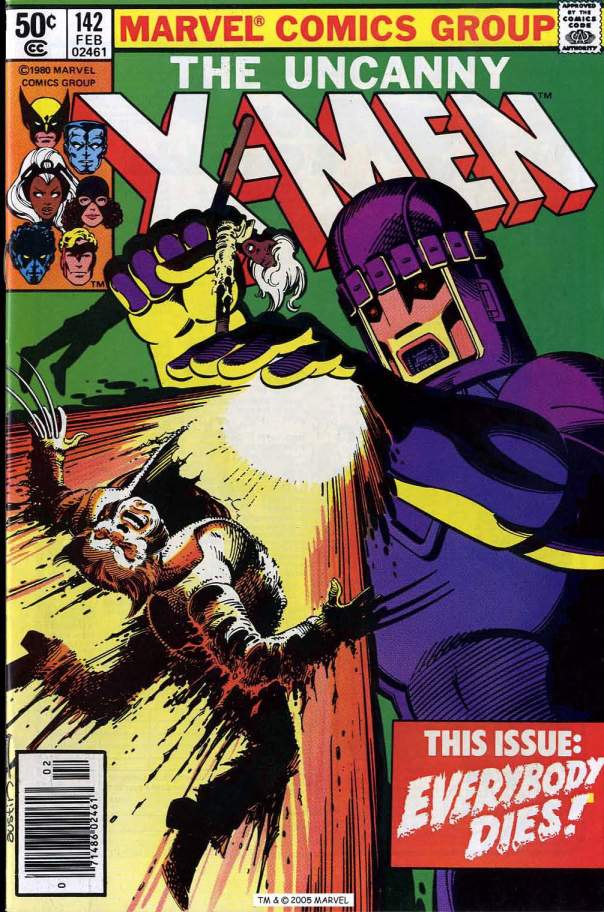 Claremont and Byrne began their tale in medias res, disorienting their audience with an unexplained time-jump, and gleefully staying several steps ahead of us as they shattered the foundations of Marvel’s carefully-cultivated continuity. Colossus and Kitty Pryde were married? Wolverine was a wanted criminal? Cyclops, Nightcrawler, the Fantastic Four, and more were dead? This was a Marvel world turned upside-down, never moreso than with the masterful reveal that the ragtag band of rebels resisting the rule of the mutant-hunting Sentinels were lead by the X-Men’s arch-enemy, Magneto! 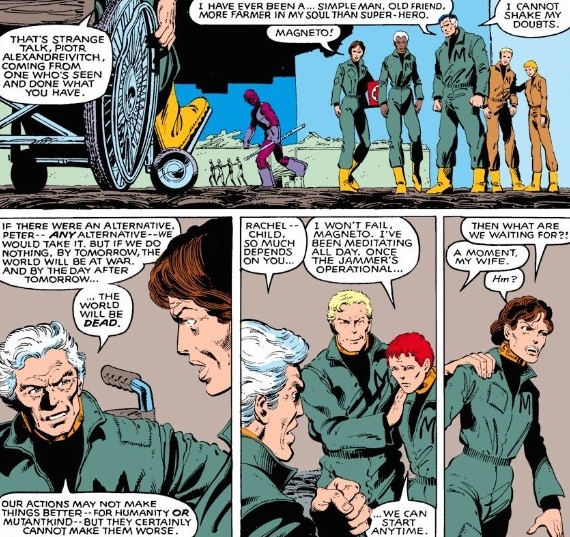 Re-reading this story after so many years, there are several things that leap to mind.

Most notably, this was a simple story … or at least as simple as a time-hopping, alternate timeline, end-of-the-world story can be! The premise was established with a few deft strokes: in a grim future ruled by homicidal robots, the world’s last superheroes travel into the past (and our present) to prevent their world from coming to be. You’d expect a lot of narrative and world-building, but pretty much the entire second part of the tale was conventional fisticuffs between the X-Men and the Brotherhood of Evil Mutants, who were bent on carrying out an assassination that would ultimately lead to an apocalypse. That’s a lot of heavy lifting to do in just an issue or two, and if it all happened a bit fast, requiring some info-dump dialogue … 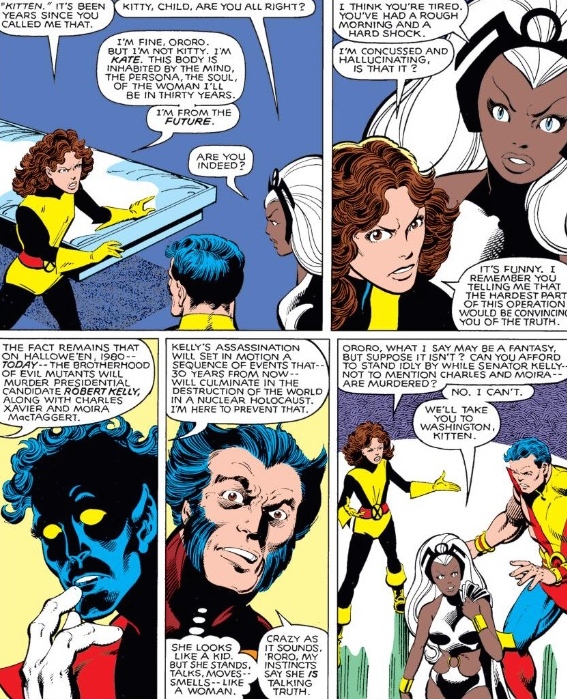 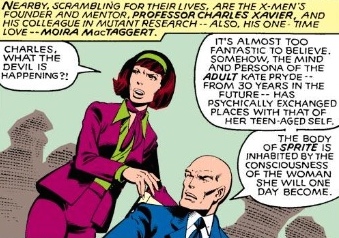 … well, those things weren’t too far afield from Chris Claremont’s usual approach, which heeded the directive of Marvel’s Editor-In-Chief, Jim Shooter, who required that every script take into consideration that it might be the very first comic someone might read.

It’s frankly not a bad way to write comics, and if it is a little on-the-nose, this style also has the virtue of brevity. Days of Future Past was a two-issue story, folks! The Bronze Age had some real advantages, I tell you! Were Marvel to tell this tale today, it would be a twelve-issue maxi-series embedded in a sprawling, endless, line-wide crossover event.

But that particular dark future had not yet come to be in 1981 (and pardon me for a moment while I consider my own Days of Future Past, where Longbox Graveyard travels back to 1984 to head off Secret Wars and Crisis On Infinite Earths, before they can unleash an endless series of cumbersome editorial events and reboots on comics fans forevermore). It was a dark future indeed, playing for higher stakes than the usual Marvel monthly — they weren’t kidding when they said that everybody dies … 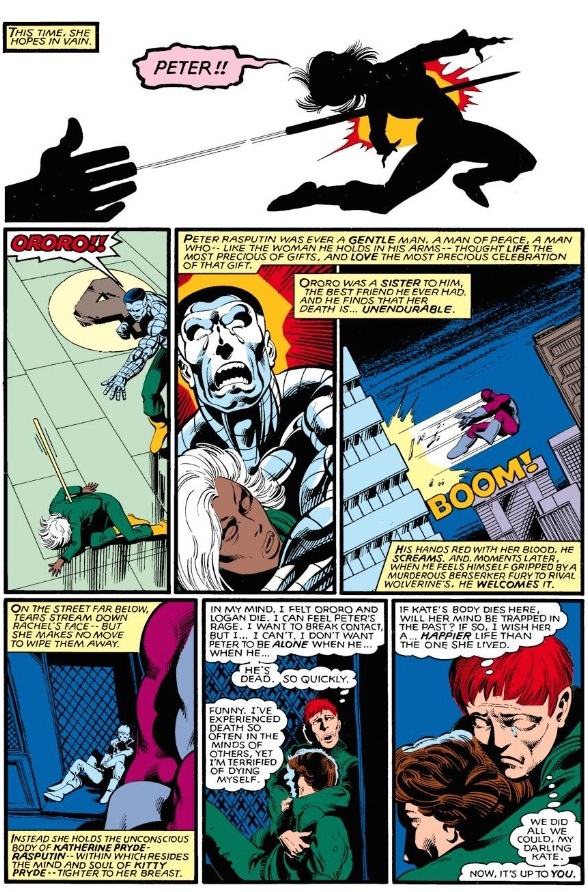 Now, sure, these deaths “didn’t count” … we knew they’d be overturned, somehow. And our heroes do ultimately triumph, averting the end of the world (the implications of which were dispatched with the speed that characterized the rest of this story) … 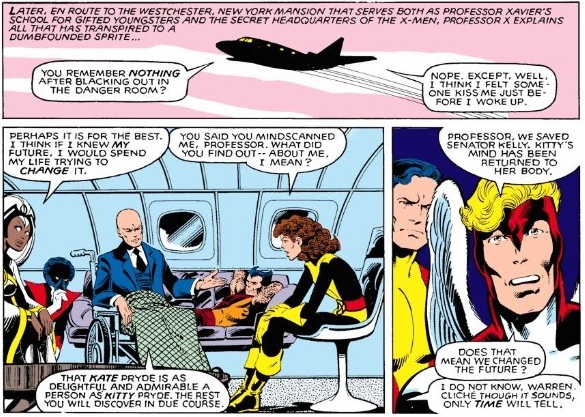 … but the fact is, those deaths really did occur. Our heroes died, in the future — just because that future was erased didn’t make the deaths less wrenching. Because no one really stays dead in comics, the most we can ask of a comic-book death is that it be respectful and emotionally-centered, and Claremont and Byrne give us that in spades, with off-panel deaths that feel more impactful because we are mostly left to imagine how they happened. Chris Claremont was a master of comic book characterization, and watching him kill off such vividly-rendered personalities hit to the gut.

There’s plenty more to unpack here, too, like the pervasive presence of the Fantastic Four (which may have reflected John Byrne’s preoccupation — his celebrated writer/artist run on Fantastic Four was in the offing), and the brief hero turn by Magneto, telegraphing an era-to-come in X-Men where villains weren’t villains so much as fallen heroes.

Forty years later, this tale is still worth reading, both for its own sake and because it marked the end of an era. The time was fast approaching when you couldn’t tell who was on the X-Men without a scorecard …

(And here is that scorecard!)

I certainly never cared for X-Men quite so much after the Claremont & Byrne team called it quits, which would happen just two issues later, so I missed much of what came after. Ultimately I think I prefer looking forward to my own future of days past — say the 70s and 80s — where the X-Men all lived in one series, and Claremont and Byrne made everything old seem new again!

And on that alternate-timeline note, let me remind you that the Super-Blog Team-Up crew is today looking at alternate timelines and pocket universes from all around the comic book multiverse. Check ’em out, and tell them Longbox Graveyard sent you!