Regular Longbox Graveyard readers know that I’ve been “fighting a one-geek war against handbags and hairstyles on Pinterest” for some time now … I’ve blogged about Pinterest, and how I use it in conjunction with Instagram; I promote my Pinterest boards twice a week here at the blog; and Pinterest Gallery references also frequently appear in my Twitter feed.

While Pinterest culture is primarily focused on fashion, celebrities, and food, I use the site entirely for comic books, and over time, I’ve built up a library of over 5000 images at Pinterest, with better than 3000 followers. I guess Pinterest took notice, because they’ve featured me with a “Pinterview” today!

This is kind of a big deal. Pinterest is one of the top 30-odd sites in the world. It remains to be seen if this feature generates additional follows for me at Pinterest or more traffic for Longbox Graveyard, but no matter the result, it is flattering to receive spotlight attention from Pinterest. 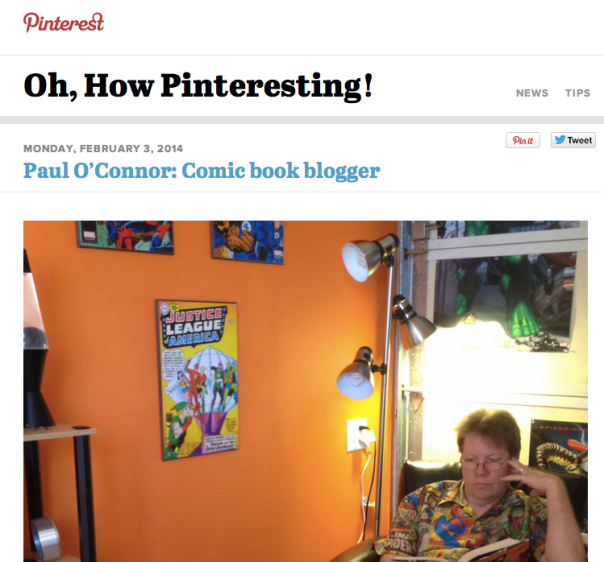 For those who don’t know, Pinterest is an image-sharing social network. A web applet allows you to “pin” images you find on the internet to your own “boards” — those boards are then visible to other members of the service. You can browse other user’s boards, “repin” their content to your own boards, and comment on each other’s pins. Clicking on a pin will direct you to the source of the image.

I use Pinterest to warehouse the images I use here at Longbox Graveyard. For instance, my “Clobberin’ Time” Panel Gallery from last Wednesday already has it’s own pinboard. I also have general boards devoted to specific characters, such as this Batman board — which was colonized with images from the reviews I’ve done on the Gene Colan and Marshall Rogers eras of that book — but has grown to be a far more wide-ranging collection of Batman art I’ve found around the web.