I’ve already blogged about my affection for Bruce Lee, and how Marvel jumped on the martial arts craze of the early 1970s with books like Master of Kung Fu. While Shang-Chi was unquestionably Marvel’s most successful and longest-running martial arts character, there is a second hero from that era that remains at least somewhat well-known today. Less ambitious than Master of Kung Fu, with more emphasis on action and traditional comic book superheroics, Iron Fist was Marvel’s “other” kung fu book of the era, and despite its relatively short run the series offered several superior issues, and the character of Iron Fist (in various guises) has persisted into the present era — and come 2015, he’ll even be a television star! The book was also notable for the first Marvel Comics work of John Byrne, who would partner with Chris Claremont on the book before the two went on to make history together with X-Men (by way of Star Lord!)

Iron Fist debuted in the pages of 1974’s Marvel Premiere #15, an origin tale from Roy Thomas and Gil Kane that is a a mixed cocktail of borrowed tropes (with a savage chaser). We first meet Danny Rand — the future Iron Fist — as a child, trudging through Himalayan snows with his mother, his father, and his father’s evil business partner, looking for the fabled city of K’un Lun, a kind of Shangri-La that opens to the outside world only once per decade. In short order, Danny’s father is kicked off a cliff by his partner (evil, remember?), cartwheeling and ragdolling off the rocks while young Danny looks on … and then if that wasn’t enough, after Danny and his mother are abandoned to die, Danny gets to watch his mom torn apart by starving wolves before he is rescued by the warrior monks of K’un Lun.

It’s enough to make you yearn for a benign origin, like watching your parents gunned down in a Gotham City alley, but this trauma is put to good use, as Danny is adopted into the mystical city of K’un Lun, and montages into a vengeance-fueled martial arts master, eventually wrestling a dragon to the ground to steal the power of its heart, and refusing the gift of immortality to leave the city on a mission of vengeance when the gates reopen a decade later.

The book had a carousel of creative teams, as was often the case with 1970s Marvel series. Roy Thomas and Gil Kane were aboard only for the first issue (though Kane would do several striking covers for the series), and caretaker writer Len Wein quickly yielded to Master of Kung Fu scribe Doug Moench, who turned in a couple action-packed issues with the artistic team of Larry Hama and Dick Giordano that saw Iron Fist fight his way to the top of a skyscraper deathtrap, seeking revenge for his father’s death. 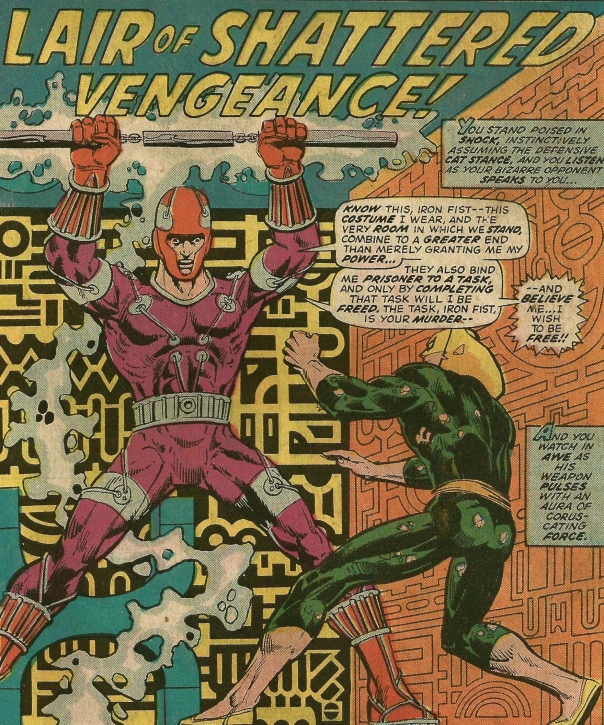 After Moench, Tony Isabella more-or-less held serve for several issues (most notable for introducing Colleen Wing and Misty Knight, who would loom large as this series matured), but the art took a substantial step backwards under Arvell Jones, and Iron Fist might have been bound for untimely cancellation …

… were it not for the arrival of Chris Claremont in Marvel Premiere #23, and, two issues later, the debut of John Byrne, marking the beginning of one of the great teams in comics history, and a definite upswing in Iron Fist’s fortunes. It takes a couple issues for Byrne to really get his mojo going (and the shift to Frank Chiarmonte’s inks from Al McWilliams didn’t hurt, though Byrne would fully arrive under Dan Adkins’ brush), but Claremont hits this series like a Double Leopard Paw Blow from the get-go, deepening the book’s characterization by giving Danny a personality (somehow overlooked to this point), and expanding and enhancing the strip’s supporting cast.

Most startling is the transformation of Colleen Wing, going from an extra in a kung fu movie to a Third Dan Black Belt who can (almost) hold her own sparring with Iron Fist, and definitely scores a knockout lecturing Danny on the strengths of the “weaker” sex. By the time Danny invades the fortress of Jera’ad Al-Din in Iron Fist #6, springing Collen from captivity, it is unclear who is rescuing who.

Claremont was known for writing strong female characters in Ms. Marvel and X-Men, and he is no different here, both with Wing and her erstwhile parter, Misty Knight, who cuts a forceful and foxy figure, providing instant direction for Danny’s aimless heroics, and rocking a groovy “MK” belt buckle with a quasi-superhero outfit that shows the creative team didn’t know quite what do do with her.

But that would change, as Misty Knight quickly evolved into one of the strongest “supporting actresses” in the Marvel line, both figuratively and literally. With her mysterious bionic arm, Misty is outwardly powerful but secretly traumatized by the loss of her limb.

With Colleen offstage, Misty proves Danny’s adventurous equal, and even tells our hero to get stuffed, walking out on him as Claremont plants the seeds for their eventual romance. In this transformation of stock characters — Misty, Colleen, even Danny — into compelling and multi-dimensional heroes, Claremont proves himself one of the most talented scribes of his era.

Claremont also gives Danny a zest for life (even a bit of a sense of humor), and promises future possibilities (never realized in this run) when he makes Danny the heir to his father’s fortune. Even K’un Lun gets a makeover, transformed from a generic lost paradise into a nest of intrigue, greed, and envy, where Danny was an orphan and an outsider, resented by the other students for his gifts and presumed arrogance in seeking the Heart of the Dragon. 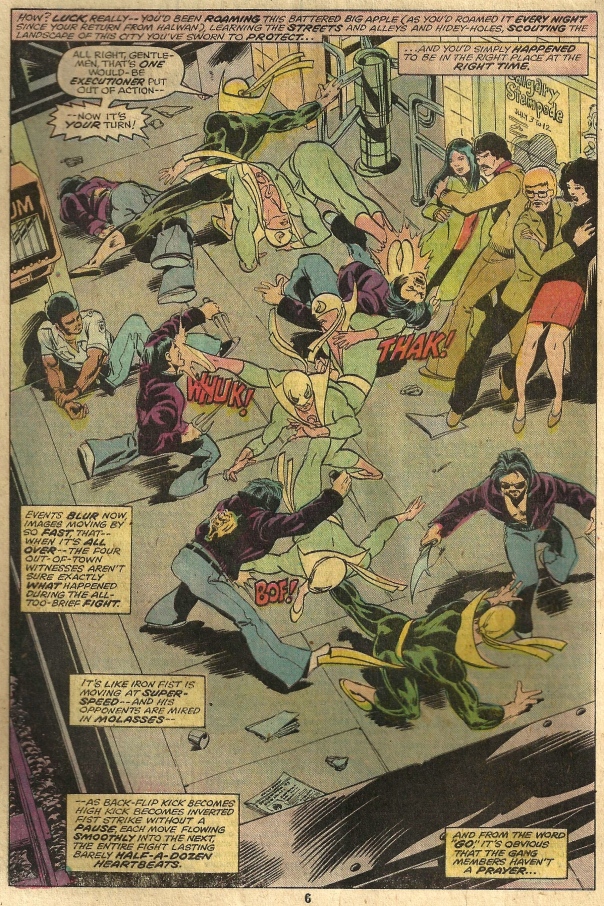 some joyful Iron Fist action, with the book’s creative team getting a cameo as the innocent bystanders

It is a heady transformation — in just a handful of issues, Claremont and Byrne pivot Iron Fist from another short-lived Marvel exploitation book and build a franchise. Unfortunately, the book never got traction with readers, and I remember its cancellation as one of cruelest I suffered as a young comics reader. Marvel would keep the character alive by splicing him into the re-named Power Man And Iron Fist, but first Byrne and then later Claremont would depart for mutant pastures, and the rich promise of Iron Fist would fall to other creators to realize.

It was fun while it lasted. The first several Marvel Premiere stories are uneven but the Claremont books constitute a minor classic, and are available on the back issue market for reasonable prices (aside from the first appearance of Sabertooth in issue #14). Apart from Wolfman and Colan on Tomb of Dracula, and Thomas and Buscema on Conan, few teams stuck together for long at 1970s Marvel, so it was always a matter of when (not if) the A-team Byrne and Claremont would depart the B-list Iron Fist … but there is such skill and joy in this brief run that the book can’t help but seem a path not taken. We know Claremont and Byrne would work mutant magic with X-Men. I would dearly love to have seen where they took Iron Fist. 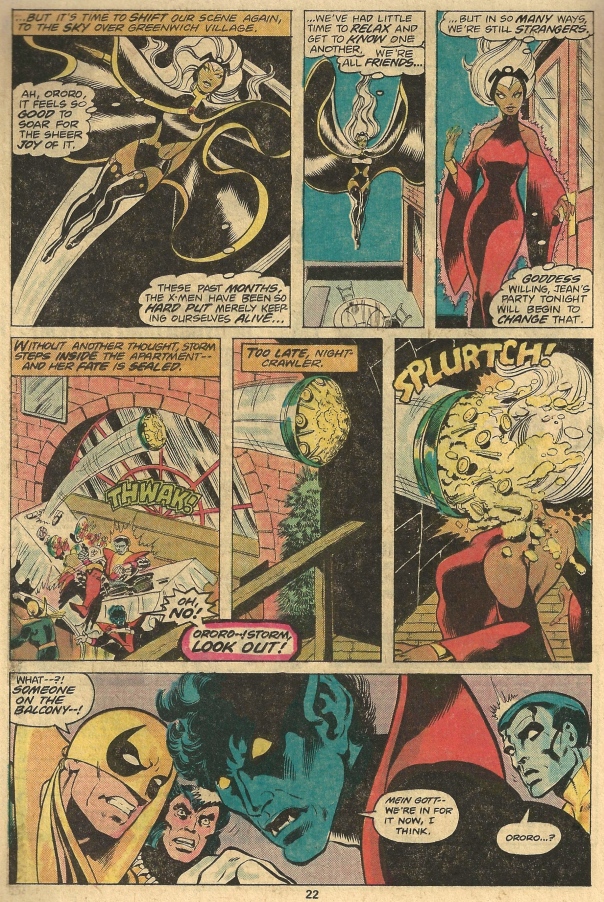 it was played for laughs, but Iron Fist held his own against the X-Men (for awhile)

The book had its idiosyncrasies, particularly as it found its footing, most memorable of which was the second-person narrative captioning style introduced by Roy Thomas in the character’s first appearance, and then adopted by following writers as a kind of holy writ (though it was eventually de-emphasized by Claremont). The style gave the book a distinctive voice, but could prove cumbersome and distracting, and I expect it drove Iron Fist’s writers batty.

Imagine if I wrote Longbox Graveyard in second person!

With trepidation and some self-loathing, you click on Longbox Graveyard. Will there be a new feature today? A new headline stalks into view. But you are cautious, Young Dragon. You have been burned before … by senseless “Panel Galleries” and regurgitated Pinterest links. Your breath quickens as you remember clicking on that “Top Ten Marvel Comics Characters” link every time you saw it on Twitter, forgetting that it was the same damn article every time. Every sense alert, you mouse-wheel down, revealing the garishly-attired green-and-yellow form of Iron Fist. You try to read the article as fast as possible, skipping the text and lingering on the art. A link appears — but does it promise enlightenment, or just a recursive visit to a Longbox Graveyard article of years past? Still your soul, exhale, and click …

Let’s clear the palette with another John Byrne action page! 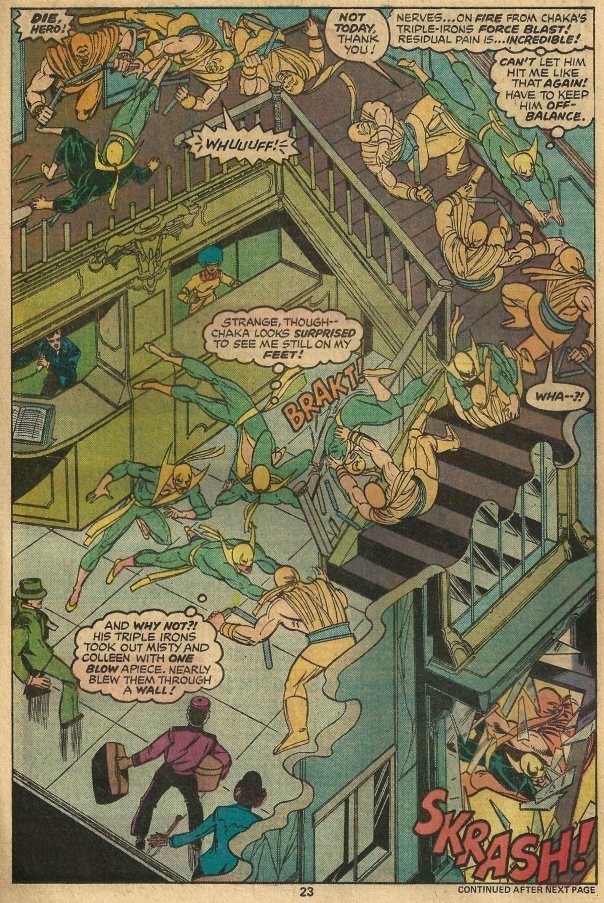 There’s also an early over-reliance on providing each of Iron Fist’s attacks with an exotic-sounding name, perhaps as an attempt to spice up lackluster action art. I half suspect early Iron Fist writers were working from one of the innumerable martial arts manuals hawked on pages of early 70s Marvel books. In his many battles over this two-dozen issue run, Iron Fist employs the …

… and a good, old-fashioned right cross, which we’re told Danny remembers from watching television as a child! 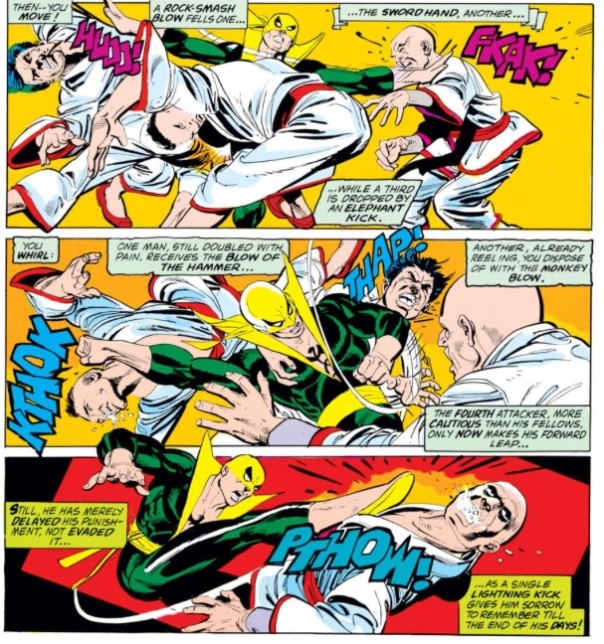 But what of Danny’s finishing move — his eponymous “Iron Fist” attack? This attack is more rarely seen.

How rare? I’m glad you asked!

That’s a pretty impressive dance card for a second-string chop-sockey hero in green-and-yellow pajamas! Iron Fist has proven a surprisingly resilient concept, revisited by Ed Brubaker and Matt Fraction in 2006’s Immortal Iron Fist (and a new series is on the way), and even as a callow teen hero in the Ultimate Spider-Man animated series. But this original vintage Iron Fist still packs a kick, even after all these years, and this brief run (especially the Claremont/Byrne era) receives my enthusiastic recommendation.