Conceived as a means of keeping me on track while organizing and reducing my comics Accumulation, the Longbox Graveyard has taken unexpected twists and turns these last hundred-plus issues. I never anticipated this blog would lead me to blog about Godzilla; or discover a deep appreciation for Jack Kirby’s take on Nick Fury’s spy gadgets; or to host a panel at San Diego Comic-Con. And likewise, it was my unplanned attendance at an Edgar Rice Burroughs panel as last year’s Comic-Con that led to this week’s column, as that presentation reignited my nostalgia for Tarzan. 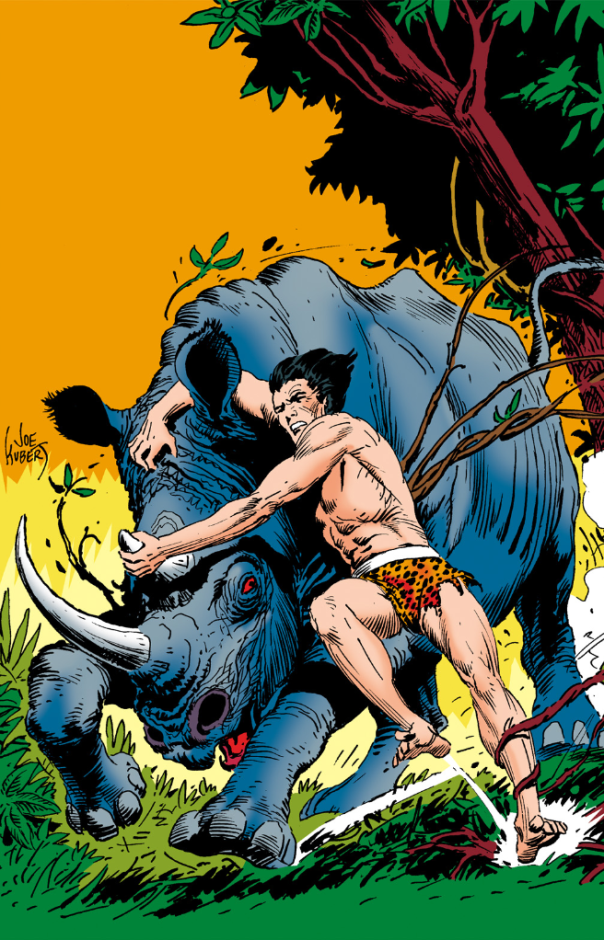 I dove deep into Tarzan after Comic-Con, reading a half-dozen novels in as many weeks, and it has been fun to reacquaint myself with the Ape-Man. The books were a bit better than I remembered, with lightning-flashes of indelible imagery, like when Tarzan puts paid to poor Count Raoul de Coude in a Parisian drawing room in Return of Tarzan, or when the villainous Nikolas Rokoff is finally cornered by Sheeta and Akut in The Beasts of Tarzan, or when Tarzan explores ancient, night-haunted chambers in Tarzan And The Jewels of Opar. The novels are full of derring-do and reversals of fortune, and if the characters are sometimes thin and there is an over-reliance on shipwreck and people being kidnapped by apes … well, these are pulps that we are talking about — and pulps that are better than a hundred years old at that!

Burroughs’ shortcomings are even more forgivable when you realize that he was essentially a self-taught writer, who embarked on an astonishingly prolific career relatively late in life — a career that saw him create fantastic worlds of adventure on Mars, Venus, and at the Earth’s Core. His greatest achievement, of course, was to create one of fiction’s immortal characters in Tarzan, who would star in two-dozen novels from Burroughs, and innumerable television shows, movies, and … comic books! Tarzan’s early comic-strip adventures under master artists like Hal Foster and Burne Hogarth are treasures of the form, but more familiar to most audiences will be Joe Kubert’s 1972-1977 Tarzan run at DC Comics. 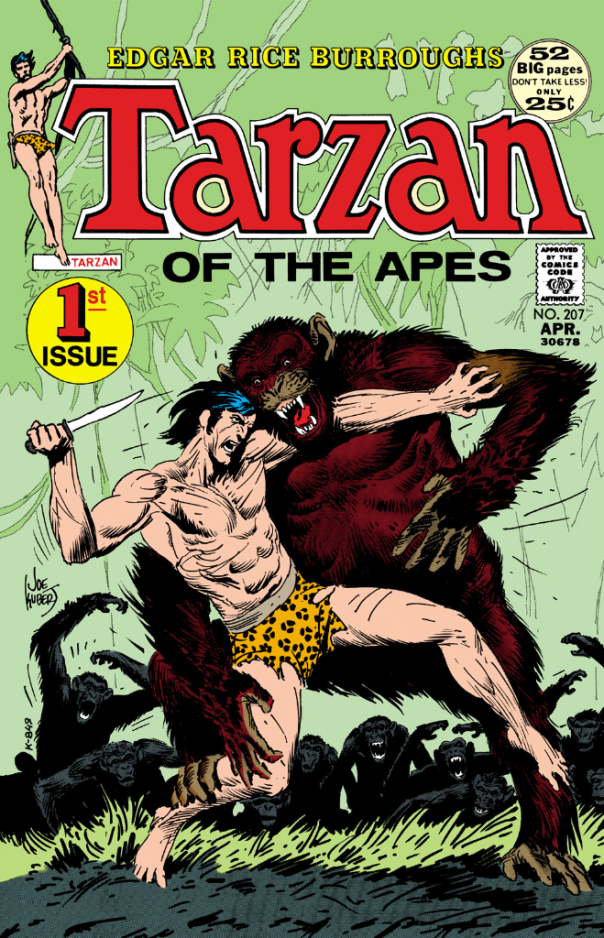 Tarzan’s first DC issue was #207 (continuing previous numbering when the book was published by Gold Key), and Joe Kubert was a one-man band — writing, drawing, and editing the new adventures of the Ape-Man. As befit a new enterprise, Kubert started at the beginning, with a four-issue adaptation of Burroughs’ Tarzan of the Apes. 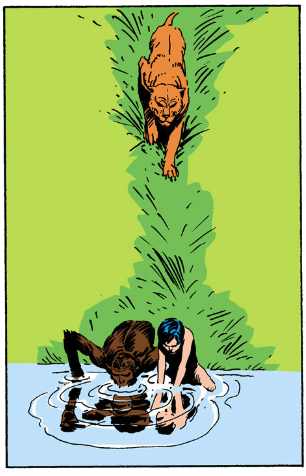 Kubert’s adaptation of Tarzan’s origin tale is a marvel of economy, compressing Burroughs sometimes-meandering hundred thousand word jungle epic into four fast-moving and visual twenty-four page comic books, doing minimal violence to Burroughs story, and in some ways improving on the original through wise omission of elements that had not stood the test of time. Kubert’s script tightens Burroughs’ plot, reduces (somewhat) the original author’s reliance on coincidence as a plot device, and eliminates the broad comic relief of the novel — which incidentally also scrubbed the story nearly free of the mild-for-its-era racist stereotyping that is an unfortunate component of the novel. 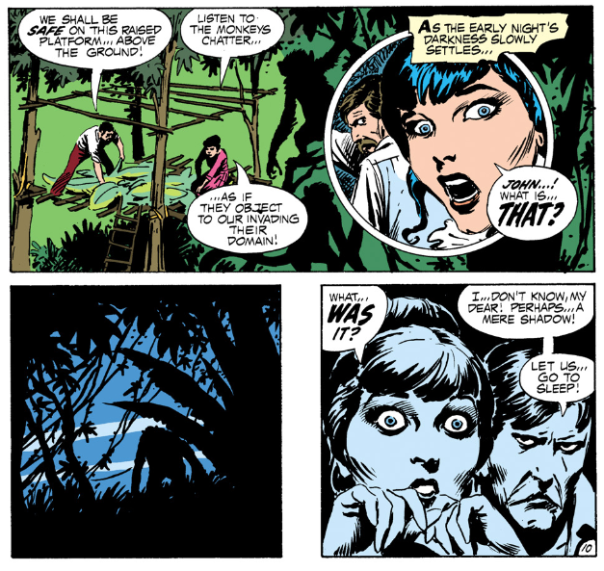 The result is jungle magic. Using a conversation between an adventurous female looking for her father in the wilds of Africa and her guide as a framing device, Kubert tells the origin of Tarzan as a flashback. As was the case in Hal Foster’s strips — which were a profound influence on the young Kubert — Kubert’s Tarzan is heavily reliant on captions, sometimes taking on the sense of an illustrated story, but unlike Foster, Kubert deploys the full comic book toolbox, including the thought and word balloons that never intruded on Foster’s art. But even with these trappings competing for panel space, Kubert concedes little in illustrative power, bringing Tarzan, the jungle, and the jungle’s many beasts to life with marvelously-constructed panels and pages that aren’t afraid to go silent when the action warrants. 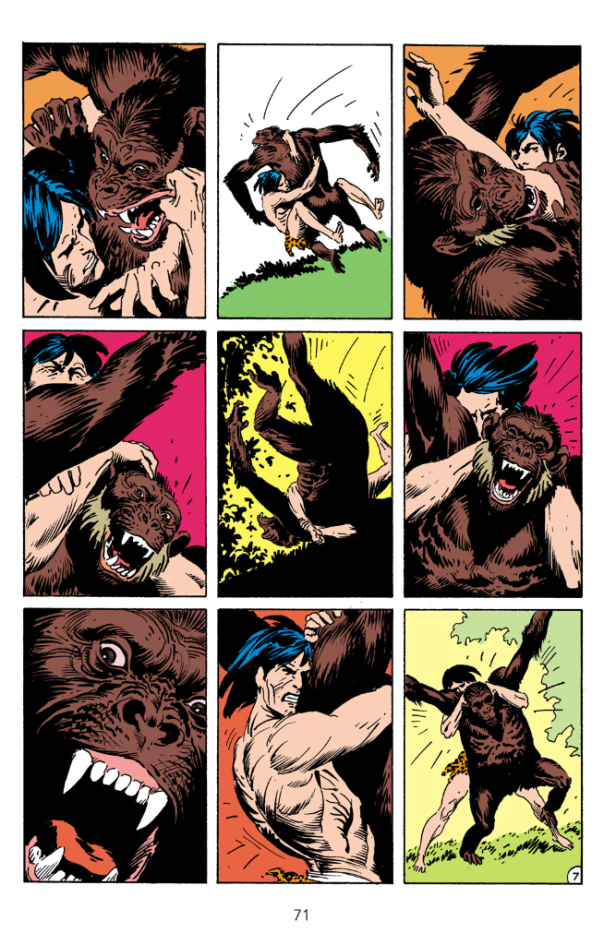 Effective genre comics require that the artist be a production designer as well as a storyteller. Bereft of familiar vistas like the rooftops of New York to anchor their comic book action, science fiction and fantasy comic book creators must work twice as hard to create a consistent and believable world around their characters. I felt that Marvel’s John Carter, Warlord of Mars series failed, in part, because world design was given short shrift — Tarzan’s Africa does not require the development of Carter’s Barsoom, but there is still a danger that the series will founder amidst indifferent swaths of jungle foliage. 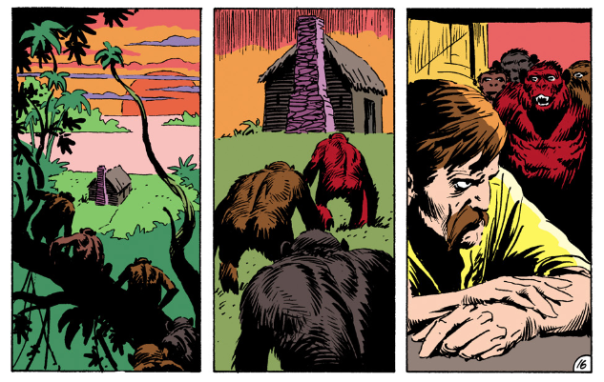 Kubert sidesteps many of these pitfalls with the same technique he used on Sgt. Rock, with economical pencils that focus the reader’s eye on the dramatic subject of each panel — usually characters and their emotions — while using the environment as framing device or abstract background. But Kubert pays more attention to the environment here than he did on the war-torn Western Front, as befits his exotic subject, employing color to good effect to show the jungle in its many hues, and never missing an opportunity to use a sunset or a full moon to alter his palette for maximum mood and variety. 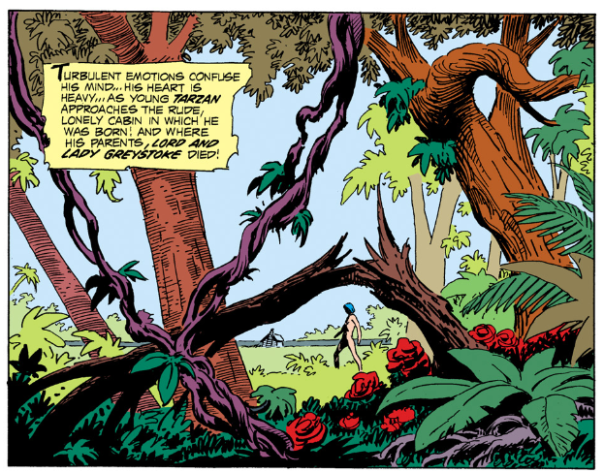 As a fan of both Burroughs and comic books, I am hard-pressed to imagine a better adaptation of Tarzan of the Apes into comics form, and I say this with full recognition of the limits and pitfalls of this kind of endeavor. In my own brief career as a comic book author, I wrote an adaptation of The Three Musketeers, but my reverence for the source material made for a poor comic book — my desire to preserve Dumas’ original language led to pages swarming with words that gave my letterer writer’s cramp and offered little insight for readers who might have been better advised to stick with the novel. In adapting Tarzan of the Apes, Kubert is respectful but unafraid to make judicious cuts when the comics form requires, bringing a lifetime of comics storytelling to bear to interpret Burroughs’ tale visually, using original language where appropriate, but also abridging and embroidering his version where additional action is warranted. 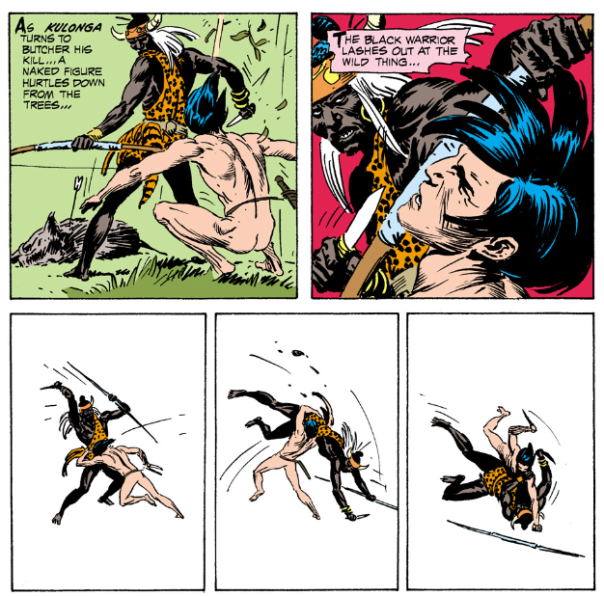 For example, Burroughs’ Ape-Boy doesn’t see his first action before the fifth chapter of Tarzan of the Apes, but Kubert gets an adult Tarzan into a battle to the death with a panther with a double-page spread on the second page of his adaptation. Additionally, Burroughs’ blizzard of supporting characters (whom the author largely abandoned after this debut novel) are minimized in favor of more visual jungle action, and Kubert even manages to adopt a bit of Jungle Tales of Tarzan (Burroughs’ sixth Tarzan novel, though it tells tales contemporary with Tarzan of the Apes) when he shows Tarzan’s battle with his future ape friend, Taug, over the affections of Tarzan’s “first love,” Teeka.

There are a few missteps, but they are minor. The framing device of the woman looking for her father doesn’t really pay off, and the page count does not permit a fuller development of the romantic triangle between Tarzan, Jane, and William Clayton, meaning that Tarzan’s selfless renunciation of his name and title in misguided consideration of Jane’s happiness rings a little hollow at the end of the tale. 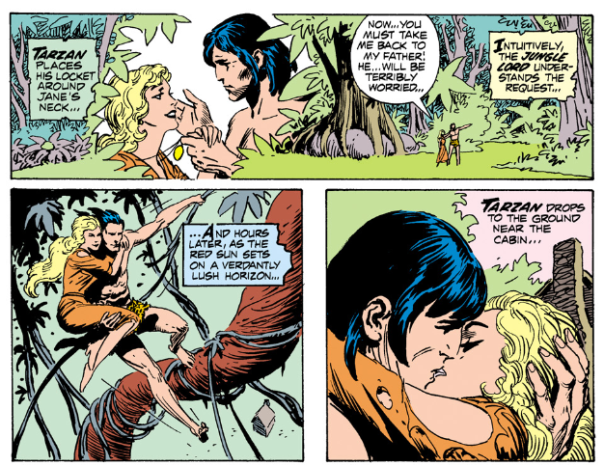 But truthfully, I have to look to find faults with this masterful example of comic book storytelling, which I think will delight both Burroughs fans and Silver Age comics readers. That I haven’t afforded these issues my highest letter grade has less to do with the quality of Kubert’s Tarzan than it does with the simple observation that Tarzan’s tales are just less-suited to comic book storytelling than the long-underwear operas that are more commonly examined here at Longbox Graveyard … but by any measure, these are superior comics, whether as a change-of-pace or simply on their own. 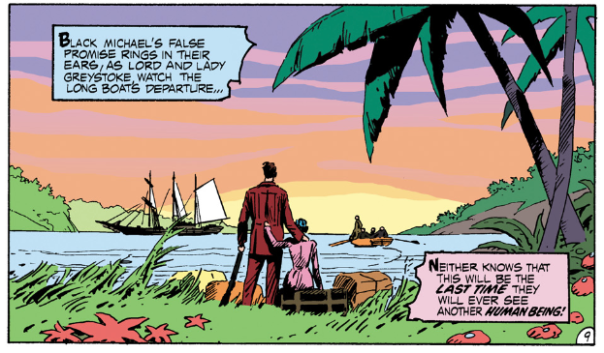