The Day They Walked Away: Captain America!

Welcome to a new feature: Super-Blog Team-Up, where I and a select cohort of blogging pals all tackle a similar issue on the same day. For this inaugural feature, we all look at a time when a superhero decided to hang up his mask!

For my favorite superhero — Captain America — that particular moment came in issue #176, in the summer of 1974, marking a bold high point in author Steve Englehart’s long run on the book. 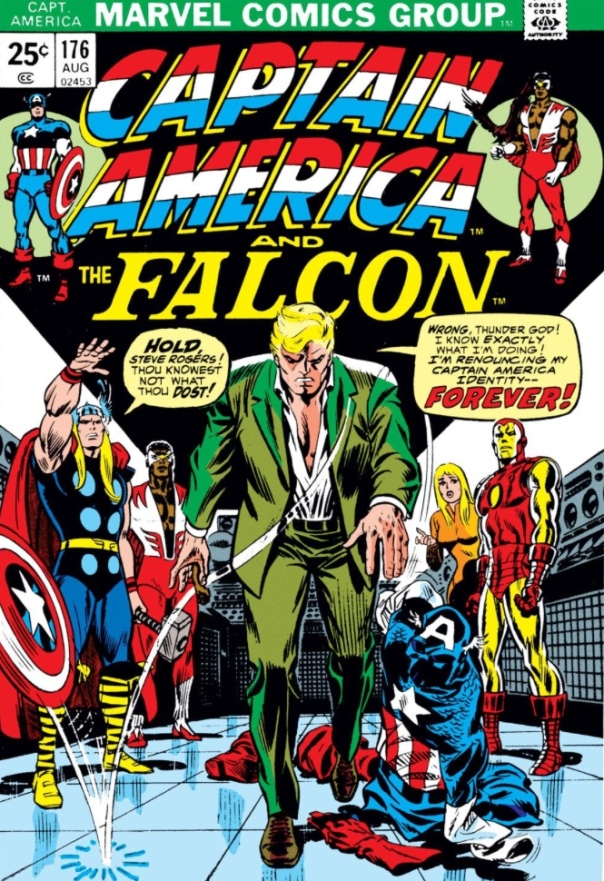 That 1974 date is critical to putting Cap’s decision into context, and that context can best be summarized in one word: Watergate.

The greatest political scandal in American history, the Watergate affair led to the resignation of President Richard Nixon, and sent the United States into a tailspin of shame, despair, and self-examination. Even as a twelve-year-old, I felt the sting of national embarrassment as the Watergate scandal dragged on and on, dominating the news cycle and providing one final, fatal flashpoint in the national debate about Nixon’s controversial terms in office.

Nixon would flee the White House in August of 1974, but Captain America’s identity crisis — sparked in no small part by Tricky Dick’s malfeasance — would continue into 1975, concluding with issue #185. It is the length of Cap’s absence from his own book — as well as the reasons why he quit, how Cap handled his own hiatus, and how the experience changed the way we regard the character — that makes this particular resignation saga unique among the many times this trope has been examined in comics.

So pervasive was Watergate that the scandal is scarcely referenced in the comics — we don’t need a reminder for why Captain America might be feeling a crisis of conscience over the country he embodies. Instead, rather than Watergate, the roots of Cap’s fateful decision reside in the “Secret Empire” story from issues #169-176. Here, Cap found his public image smeared by the “Committee to Regain America’s Principles” (an allusion to the real-life Comittee To Re-Elect The President, which was saddled with the you-can’t-make-this-up quasi-acronym of CREEP). Cap’s quest to reclaim his good name brings him face-to-face with the leader of the Secret Empire, who was, in all but name … Richard Nixon!

When “Nixon” kills himself, Cap decides he’s had enough. America isn’t a country he recognizes anymore — it has become a corrupt and ambiguous place unlike the nation he fought for during World War II. After a bit of soul-searching, Cap decides to give up his identity, provoking incredulity from his fellow heroes, including a “nosey” Iron Man who appeals to Cap’s sense of duty … 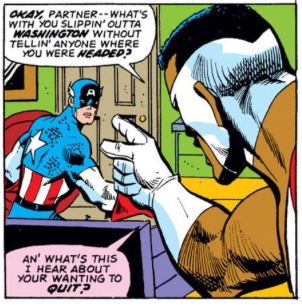 But for Cap, what was once simple is now complex. In the wake of Watergate, and the Vietnam War, America is uncertain of her place in the world … and so is Captain America. 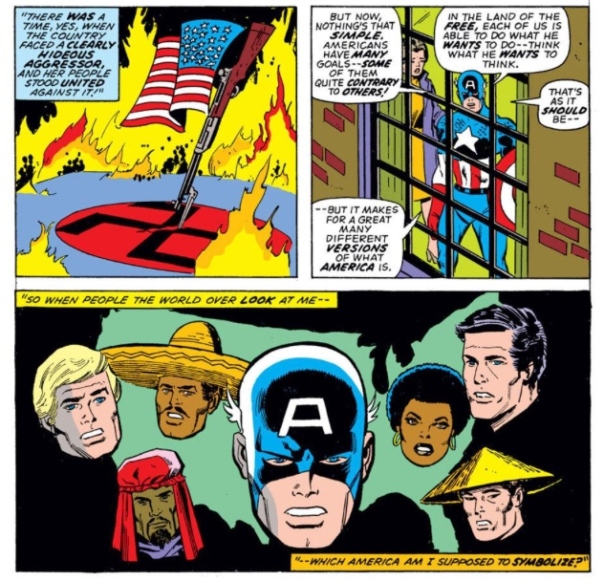 And so, Cap makes an impossible declaration.

So far, so good. Cap is suffering from a kind of post-traumatic stress disorder after seeing “Nixon” top himself, uncorking all his long-simmering anxiety over representing an America that has come off the rails. Still, this isn’t the first time we’ve seen a superhero hang it up, and even twelve-year-old me knew our hero would have to reverse his decision eventually.

But the following issue makes clear that this isn’t a crisis that will be resolved quickly. Steve Rogers is resolute in his decision to give up his Captain America identity, which is as much as his partner, Sam Wilson, can take. As the Falcon, Sam would become the book’s headline hero for the next several months …

… but the name on the masthead was still, “Captain America,” and to keep the character present in his own book, Englehart developed a clever subplot where substitute heroes — with no particular powers — sought to take up the uniform, with uniformly disastrous results!

Man of action that he is, Steve Rogers can’t help but be involved in fisticuffs, but coming to the Falcon’s aid in a street fight backfires when Sam’s deep-seated “sidekick” insecurities are laid bare.

The only person in Steve’s life who seems content with his decision is Steve’s lady love, Sharon Carter. Having resigned her job as a S.H.I.E.L.D. Agent, Sharon seems only to want to play house with Steve. Frankly, this isn’t Sharon Carter’s finest moment — she spends most of this saga acting frivolous, or pouting when Steve begins to reconsider his decision (and in this her behavior is in marked contrast to how Steve Gerber was writing Sharon in the contemporaneous Marvel Two-In-One #4-5, where Sharon elbowed her way into a time travel adventure with Cap and the Thing, then put it to the Badoon alongside the Guardians of the Galaxy!).

Despite this dissonance, Cap’s resignation is nicely handled in the rest of the Marvel line (and it helped that Englehart was also scripting The Avengers at the time). Cap’s decision sends ripples through the Marvel Universe, prompting Steve Rogers to come under attack from the obnoxious “Golden Archer” …

… who proves to be Hawkeye, hoping to convince Steve to more fully examine his decision.

It weirded me out that under his Golden Archer mask Hawkeye was wearing … another mask! But no matter, it’s the thought that counts, and in this as in many things, Hawkeye proves the right kind of crazy, inspiring Steve Rogers to take up an entirely new identity!

Now we’re really onto something — the story has taken an unexpected turn, and Englehart revels in it (“You thought this was just a rerun of a thousand old plots.”) From the end of Captain America we are now present at the birth of a new superhero — Nomad, the man without a country!

But first, there has to be a costume montage, with a not-so-subtle Batman reference … 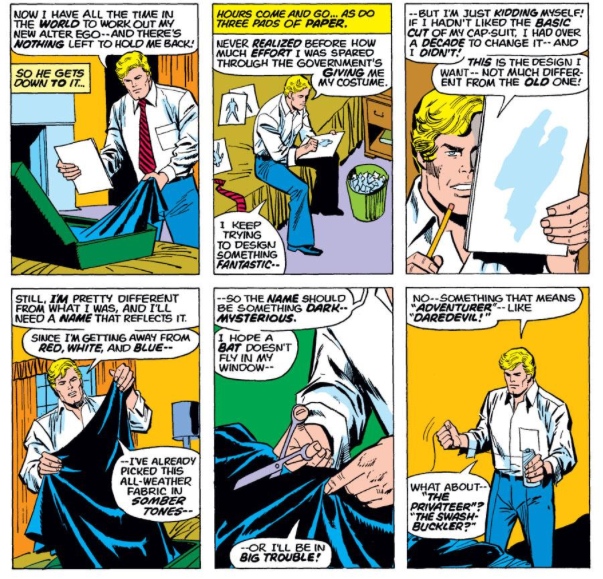 … and who knew that Steve Rogers suffered from Cape Envy? 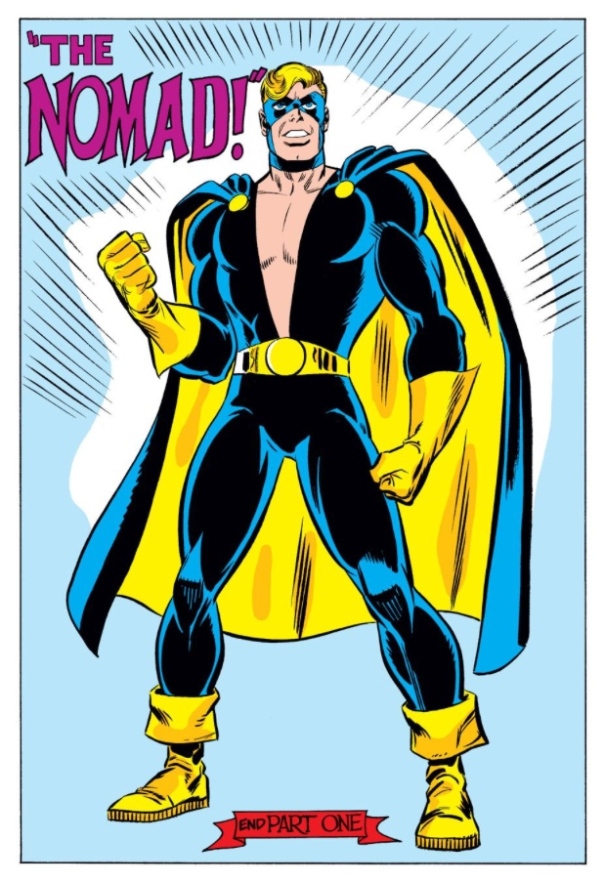 Hmm. Not a great look, Steve. That plunging neckline is especially daring, but … sheesh.

No matter. Cap — I mean Nomad — is soon in action, and his new costume scarcely survives its shakedown cruise. Cap learns that capes are reserved for DC superheroes …

… but Steve’s fashion crime isn’t severe enough to cost him his Avengers membership, as the team is eager to welcome him back, whatever his identity.

Alas, things go from bad to worse for Steve, as the Nomad soon bottoms out, battling against … the Gamecock? Oh, Steve, say it isn’t so!

Still, Steve seems to have had genuine affection for his alter-alter ego, and might have remained the Nomad indefinitely, but he would soon learn that Captain America wasn’t something he could just pack away in a box.

The public’s confusion over Cap’s decision would come to weigh heavily on Steve, who did himself no favors by renouncing his identity while Cap was still under a cloud from the Secret Empire’s smear campaign …

… and so powerful a symbol was Captain America that aspiring heroes could not leave it alone. First played for laughs, Englehart’s subplot about the substitute Captain Americas took an exceedingly grim turn when the last of Cap’s stand-ins was gruesomely murdered by the Red Skull!

The Red Skull’s reappearance sparks another identity crisis for Steve. At first he seems to cleave even more strongly to his Nomad identity, but in the span of a few panels, Steve has an epiphany about the power of symbols, as well as his own central role in the pinnacle of symbolism — the “American Dream.”

And so Captain America was reborn!

In short order, Cap would put paid to the Red Skull and restore his good name. With Captain America restored to the Marvel Universe, Steve Englehart would depart the book, but he made a mark on the character that few creators can equal. By positioning Captain America as the guardian of the American dream, Englehart simultaneously insulated the character from future political scandals, and elevated the character to mythic status. Captain America because Marvel’s elder statesman, more purely heroic than ever before, and occupying the role of the one superhero in the world that everyone could agree was truly … super.

In giving up his Captain America identity, Steve Rogers finally discovered what Captain America was all about. There would be dozens of different takes on the character in the years ahead (Jack Kirby’s idiosyncratic take on Cap in his 1970s return to Marvel would commence within a year), but Cap’s role as the voice of moral conscience would be core to the character, echoing down through the ages, lending additional authority to countless “Cap speeches” and possibly reaching it’s ultimate expression when Cap chose to side with the spirit of America over the letter of the law in Marvel’s 2006 “Civil War” event.

That will do it for my look at the day Captain America walked away, but our Super-Blog Team-Up continues over at Flodo’s Page, where Super-Blog Team-Up #3 (of 6) looks at the time Green Lantern told the Guardians of Oa to take their ring and shove it! And be sure to check out all the articles in our “Day They Walked Away” Super-Blog Team-Up series …

And you can always see the latest Super-Blog Team-Up project on the team’s very own page.

Thanks for reading! Share your thoughts on Cap calling it quits — and on all our Super-Blog Team-Up efforts — in the comments section, below!