Thor: The Dark World doesn’t open in U.S. theaters until November … but Longbox Graveyard’s foreign correspondent, Veronique Navette, was on the scene for the film’s Parisian premiere last week, and offers these EXCLUSIVE (and spoiler-free) images and impressions! 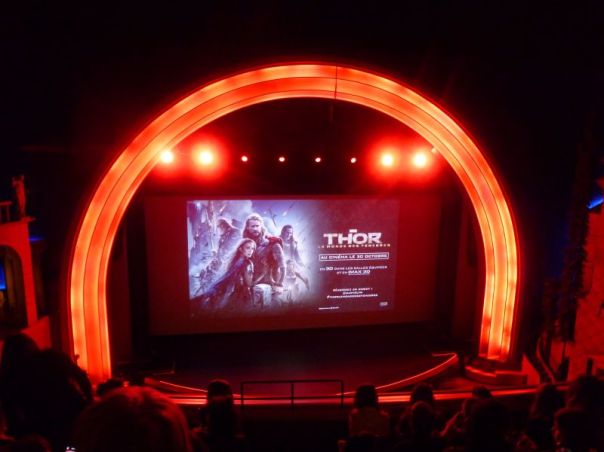 Veronique took her seat in the theater about thirty minutes before the stars arrived, and took the first of these photos from the live feed offered inside the theater of the red carpet activity outside.

“Obviously, people ADORE Tom Hiddleston and his character over here,” Veronique writes. “Natalie Portman had her large share of fans too. I thought it was just wonderful how much they both went along with the game of signing autographs and taking pictures. Yes, it is part of their job, but still.”

“They were very nice about it and involved. I liked how Tom Hiddleston would take people’s cameras and take a picture with them and him in it. That’s what he is doing on a couple of these pictures.” 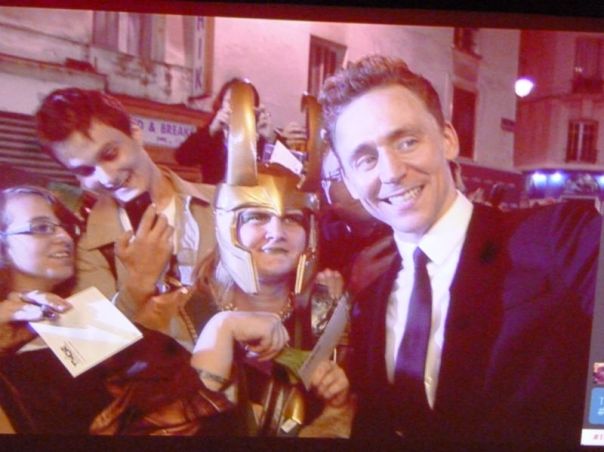 “We are now inside the theater.

“In this first picture are, from right to left: Kevin Feige, Marvel’s big boss (!!) who said it was his first time in Paris for the premiere of Marvel movie; Louis d’Esposito, one of the Executive Producers; Alan Taylor the Director of course, and the others … you know.”

“In the second picture is a ‘mini’ Thor offering a big bouquet to Natalie Portman. The lady who hosted the show said that Chris Hemsworth could not make it but sent one of his buddies … it was very cute.” 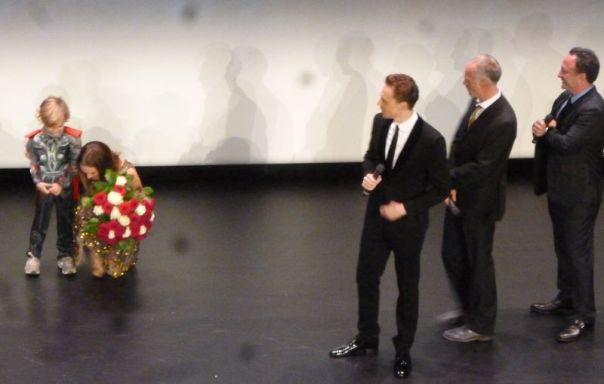 And finally, a special treat …

“I made a small video of Tom Hiddleston speaking about his character in French,” Veronique writes. “He speaks pretty good French, it was a nice surprise and people loved that of course!”

(Veronique reports that she liked the move better than the original film, by the way!)

Thanks, Veronique, for your glamorous account of the premiere of Thor: The Dark World! I am official jealous of your having seen the movie … at least until the picture comes to American shores!