Normally I save these “transparent traffic stats columns” for my bi-annual Longbox Soapbox entries, but these events will be cold by the next time one of those columns rolls around … 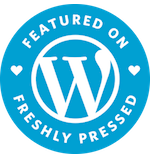 Longbox Graveyard was “Freshly Pressed” last week. This is a recognition afforded by WordPress to blogs publishing on their platform that they wish to spotlight. The selection criteria is obscure, but as the official site notes, “There are half a million of you and a handful of us,” so being selected for one of the eight daily Freshly Pressed spots is a significant endorsement for Longbox Graveyard.

It also feels a little strange, because this particular endorsement came for Best Frenemies Forever, a guest blog about the relationship between Spider-Man and the Human Torch, ably provided by the talented Mark Ginocchio of Chasing Amazing blog. So, yes, Longbox Graveyard was Freshly Pressed, but not in recognition of the work I’ve done here the last two years so much as for Mark’s very fine contribution. I said I wanted to welcome other voices to Longbox Graveyard, and I meant it, so I will still happily accept this recognition, whatever mixed signals it sends to my ego. My only regret is that the feature didn’t send more clicks over to Mark’s home blog, which is excellent and worthy of a Freshly Pressed feature all it’s own (and you should all click over there right now).

Reading the experiences of other bloggers who were Freshly Pressed, I expected my airbags to deploy from the impact of thousands of views, but that effect never quite materialized. Rather than thousands of hits and hundreds of comments, Longbox Graveyard’s traffic was in the hundreds during my Elvis Week(end) … but that’s OK, and probably about as much as you can expect for a long-form Bronze Age comic book blog. If we’d posted about something more accessible — like an excoriating review of Iron Man 3, or some kind of hunky pose-down between Chris Hemsworth and Chris Evans that generated plenty of heated comments — then I expect we would have gotten a lot more traffic.

For Longbox Graveyard, the Freshly Pressed effect was felt not as a spike but more like the tide coming in (and staying). Near as I can tell, the WordPress dashboard lumps views from within WordPress itself with organic views, so exact numbers aren’t available, but from Friday through Sunday (when Longbox Graveyard was at or near the top of the Freshly Pressed site), I appear to have averaged about 325 additional daily views that I can ascribe to the promotion, more than doubling my usual weekend traffic. For the week as a whole, I also gained 139 new followers for the blog (versus the 100 that had signed up in the preceding two years), and also garnered 58 “Likes” (also, easily, a record for the site). Those Freshly Pressed floodwaters have also been slow to recede, and as of this writing my daily views are still running noticeably ahead of normal.

Another impact of an elevated profile inside the WordPress ecosystem (which I didn’t really know existed before this) were a series of “reblogs” from other bloggers, which I gather is a kind of endorsement. It would be churlish to question the value of a Human Torch and Spider-Man article to the Chinese Massage blog, but there we are (and if you find yourself in Beijing and want a pretty girl to help you get “vigorous and comfortable,” well, now you know where to go. Flame On!)

Because it never rains but that it pours, the Freshly Pressed tidal surge was foreshadowed by a flash flood, and followed by a thunderstorm. First, a link to Mark’s post got traction over at the comicbook sub-Reddit, driving 1600 views on what turned out to be an all-time record day for the blog (2,630 total views). I suspect that visibility had a lot to do with WordPress discovering Longbox Graveyard for their Freshly Pressed recognition in the first place. Then, out of nowhere, my Panel Gallery of Steve Ditko’s Amazing Spider-Faces was featured at Tor.com, adding another couple hundred views on 6/25, right when the Freshly Pressed effect was beginning to abate. (Tor.com? Who knew?) It is possible that my Dikto piece was discovered as a result of Freshly Pressed traffic, but I think I’ve traced the origin of the Tor endorsement to a retweet of one of my routine promotional Twitter messages on Sunday. Whatever the source … thanks, and I’ll take it! 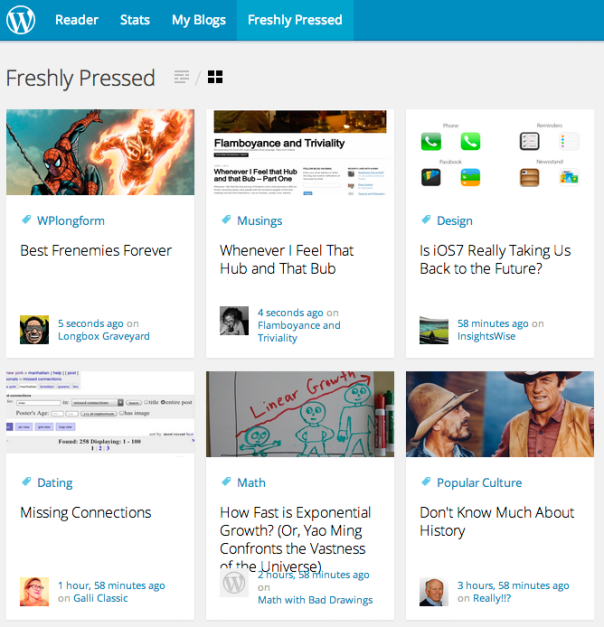 That’s all I can tell you about Freshly Pressed! I have no special insight on why Longbox Graveyard was selected, or how you can make that happen for your own blog. I do know that it is a legitimate accomplishment for Longbox Graveyard, and I’m proud to have had it happen. Thanks to WordPress for the recognition, and thanks especially to Mark Ginocchio of Chasing Amazing for his great work and contributions to this blog! Thanks also to my many readers — both those who have been with me from the start, and those who have joined in just the last week — for making Longbox Graveyard such a rewarding endeavor!

(And if you are a new reader who discovered Longbox Graveyard through Freshly Pressed, or Reddit, or Tor.com, or a prophetic dream, or even a tip from your cellmate, why not post in comments and introduce yourself? I won’t bite).