← Pepper Potts: Then And Now
Top Ten One Hundreds! →

Mark Ginocchio from a recently redesigned Chasing Amazing is back! You might remember him from his two-part look at the Top 10 Spider-Man Battles (Part 1/Part 2). While Mark normally blogs about his affection for all things Spider-Man at Chasing Amazing (and has even started talking about the “Wall Crawler” on the Superior Spider-Talk podcast), Longbox Graveyard is delighted to welcome him back to write about the larger comic book universe. This week, Mark shares his thoughts about the grand-daddy Marvel cross-over event of them all, 1984-85’s Secret Wars series. Take it away Mark!

Living in and around New York City for my entire life has made me elitist about certain things … and I hate that. A few weeks ago, my wife and I caught a Saturday matinee of the Broadway revival of the musical Pippin. Upon getting out of the theater, I found myself mumbling and cursing the Times Square crowd under my breath. Really, you’re going to stop foot traffic to look at a cowboy in his underwear? Really, you flew in from Europe just to see the Lion King on Broadway when there’s a dozen other quality shows that are dying on the vine right now due to lack of sales? (No, Spider-Man: Turn off the Dark is not one of those shows that I sympathize with).

I hate that I’m like this, because the same kind of snobby elitism has been used against me and my love of certain things in pop culture. In the case of my comic book fandom, that would mean my adoration of Marvel’s Secret Wars series. 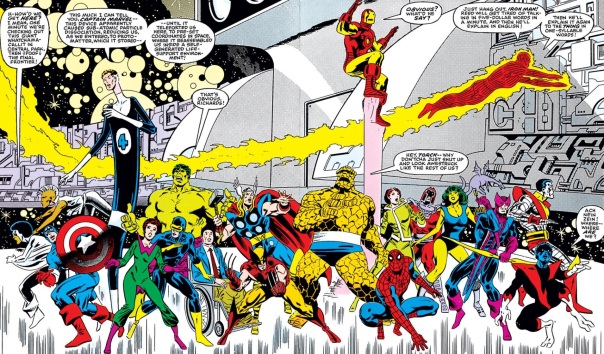 Published in 12 issues between 1984 and 1985, Secret Wars is considered to be the comic book industry’s first true “event,” pitting all of Marvel’s A-List heroes against an assembly of (mostly) A-list villains in a fight to the “death” on another planet that’s simplistically dubbed “Battleworld.” The series is the brain child of then-Marvel editor-in-chief Jim Shooter, certainly one of the industry’s biggest lighting rods, with pencils courtesy of Mike Zeck and Bob Layton. 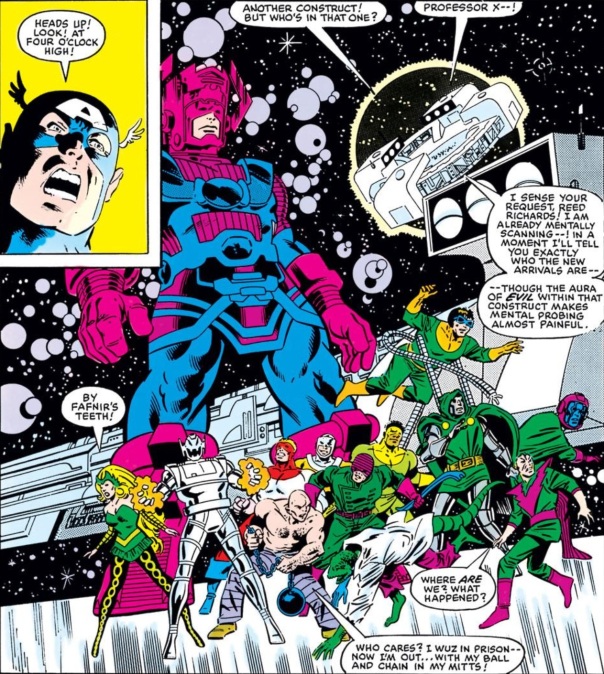 The series is largely considered a joke and a gimmick by anyone who calls themselves a serious comic book aficionado and with good reason – Marvel folks have been unashamed in the fact that the whole event was created to help market a line of action figures designed to compete with the “Distinguished Competition’s” Legion of Super Heroes line. With toys being the driving force behind the series, the plot is mostly flimsy and the characterization of some of Marvel’s most beloved heroes and villains is often quite puzzling. So you would think a guy who pens a column on the internet called “Gimmick or Good” would just rightly dismiss this series and instead focus my energy on the plethora of great comics that were released in the 1980s.

But I can’t do that. I love this series.

Never underestimate the power of a child’s rose-colored glasses. First, let’s talk about those action figures. I owned them all as a kid and my mother still has my “black suit” Spider-Man figure sitting on the windowsill in her kitchen as a joke after finding the toy buried in the backyard many years ago (I must have been recreating the events of “Kraven’s Last Hunt”). Last year, while watching an episode of AMC’s Comic Book Men and seeing Secret Stash store owner Walt become child-like with glee when a vintage Marvel World board game came into his store, I started to openly reminisce to my wife about the Secret Wars figures. I knew whatever wasn’t buried in the backyard was probably buried in my parent’s basement, and I was likely to never see them again. A few months later for Christmas, the first series of the action figures was waiting in my stocking. My wife found a used set on eBay – surely not for collectors. But I was ecstatic regardless because a piece of my childhood had been preserved.

But beyond toys, the series defined the Marvel Universe for me. As a (very) young child, these were some of the first comic books I ever purchased. Yes, my ownership of Secret Wars even predates my first copy of Amazing Spider-Man, which as many of you will note, is my ultimate obsession in the comic book universe. It was from these comics I was able to identify all of Marvel’s heavy hitters: Captain America, Spider-Man, the Fantastic Four, Iron Man, Hulk, the X-Men (the REAL X-Men, i.e. Wolverine, Storm, Cyclops, Nightcrawler, Colossus, Rogue and Professor X), Doctor Doom, Magneto, Kang, Doc Ock, Ultron, etc. etc. etc. While I’ve read and enjoyed some DC stories throughout my lifetime, I have always been firmly entrenched in the “make mine Marvel” camp, and Secret Wars is almost entirely responsible for instilling that affection at an early age.

Yes, when re-reading the series today, there are plenty of cringe-worthy moments. Shooter’s choices for some of the characters border on downright bizarre in sections: does the Wasp survive a near-death experience and really complain about her hair and make-up? Did She Hulk just say “tubular?” And why is “Rhodey” Rhodes (filling in for Tony Stark as Iron Man) getting all “what do you mean you people” with everyone? 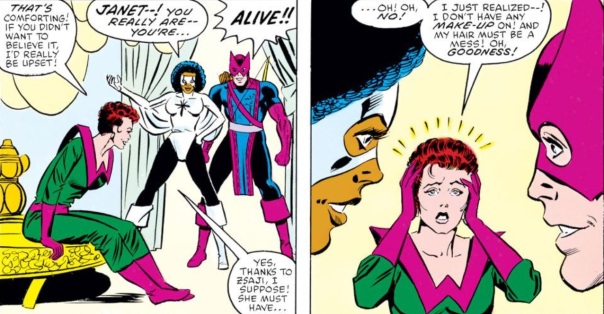 Every issue is basically just building up for another confrontation between good and evil. Having Doom eliminate a character as awesome as Kang via Ultron so early in the series is questionable. The Lizard’s presence is a flat-out mystery to me. Was he even a featured Spidey villain during this time? Having Ultron get so easily manipulated by Doom is also disappointing.

Irrelevant. The fights are fun and everyone gets their moment, whether it’s Hulk holding up an ENTIRE MOUNTAIN to save his teammates, or Spider-Man outfoxing the X-Men who operate as a pseudo-rogue third party based on how the heroes mistrust the “mutants.” On the villains side, watching all of these immense egos try to get along is more entertaining than any season of the Real World. Plus, as the series goes along, it becomes perfectly clear that this is Doom’s story, and considering I find Doom to be one of the most compelling villains in comics, I’m alright with that.

There might be some panels where there’s just too much going on – too many people – for the art team to effectively draw, but Zeck creates three unquestionably iconic covers in the series’ first, eighth and tenth issues. Other artists continue to homage these covers to this day, which is always the ultimate testament to an illustration’s influence.

And despite the fluffiness of the series, there are a few moments that have gone on to have a long-term impact on the comic book industry. At the end of the series, The Thing, who has mysteriously been transforming back and forth between his rockman persona and Ben Grimm, decides to hang back on Battleworld to figure some stuff out, leading to a period of Fantastic Four where She Hulk is the fourth member. We get the first appearance of the second Spider Woman, Julia Carpenter, who also happens to have “nice legs” per the data collected by Rhodey’s Iron Man technology (or maybe that was just his own observation).

But more than anything else – and of course as one of the web’s biggest webheads you know I would zero in on this – the series’ eighth issue marks the official first appearance of the alien symbiote. While it initially looked like this moment was just another gimmick to get Spider-Man in a svelte black costume (complete with action figure), the symbiote would later be used to create one of the most significant entries to Marvel’s rogues gallery over the past 30 years – Venom.

Yes, as I’m sure most members of the cult of symbiote know, Venom’s first appearance wasn’t “technically” Amazing Spider-Man #300, but rather Secret Wars #8. I did in fact own this issue as a kid, but read it into a non-collectible pulp. I haven’t picked up a replacement issue because I’m more focused on using my (limited) financial resources to finish out my run of Amazing Spider-Man, but mark my words, I will come to own a nice copy of Secret Wars #8 at some point. It’s a must own for any fan of Spider-Man or Venom.

So, just like it’s futile to tell an NYC tourist to not waste their time and money staring at wax figurines at Madame Tussauds (and seriously, why are you eating at a TGIF’s when you’re in the culinary capital of America?), don’t expect to ever get me to change my opinion on Secret Wars. You’d essentially be arguing with a five-year-old, which is analogous to my mental state of comic book euphoria every time the words “Secret Wars” are so much as whispered around me.  The series is just a demonstration of how hopelessly subjective our opinions about comic books can be.

Thanks to Mark for this week’s blog! Be sure to visit him at the all-new Chasing Amazing!

Mark is the co-host of the Superior Spider-Talk podcast and the founder/editor of the Chasing Amazing blog.
View all posts by markginocchio »

← Pepper Potts: Then And Now
Top Ten One Hundreds! →