Editor’s Note: With Iron Man 3 in theaters this week I could think of no better time for a guest blog from my old pal Chris Ulm, who is a fine writer, a giant nerd, and the biggest Iron Man geek I know. Take it away, Ulm!

As I write this, we are exactly seven days away from Iron Man 3 hitting the big screen. Despite my inappropriate level of disappointment with the various trailers that have been released so far, I will be first in line. Why?

Because I really have no choice. See, the …

… has haunted me since the fateful day that I saw issue #47 on the racks at the slightly disreputable Sweet Liquor store in Culver City, CA: 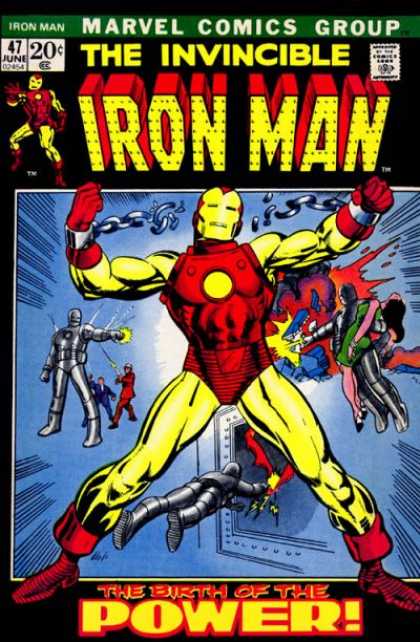 My father reluctantly bought the tattered and beat up issue (in those pre-comic book store days, all of the comics I bought were characterized by embedded dents and folds from being pressed into wire racks and fondled by filthy urchins such as yours truly). I was instantly enthralled.

Entitled “Why Must There Be An Iron Man,” this re-telling of Iron Man’s origin was written by Roy Thomas and illustrated by Barry Windsor Smith. The story absolutely captivated me and turned me into a comic book nut. Thomas did a masterful job of recapping Tony Stark’s ill-fated journey into Vietnam, his subsequent ambush and race against the clock to build a weapon of vengeance with the help of kindly Dr. Yinsen. As I breathlessly read the issue, the first nine years of continuity exploded into my brain. I learned about Iron Man’s friends, lovers and enemies. About the Avengers, S.H.I.E.L.D., the rogues gallery — all the sturm und drang typical of Silver age Marvel under Stan Lee and Roy Thomas. 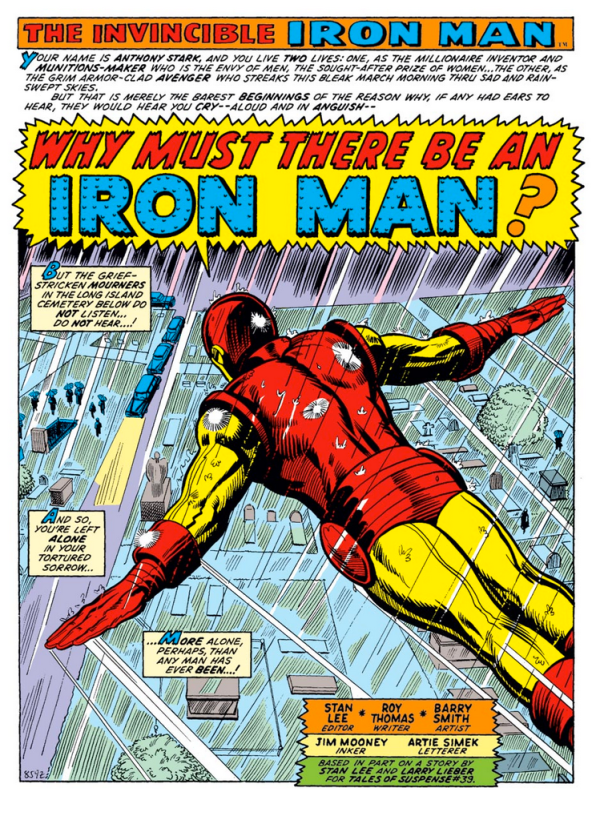 The story was told with economy typical of Thomas’ work. It probably helped immensely that In 1972, Iron Man has only been around for nine years and the Marvel Universe was only a tad older. To put it in perspective, Hollywood brought Marvel’s Spider-Man to the screen ten years ago, and the comic book Marvel Universe is now over 50 years old. Back then, ol Shellhead’s back story felt both infinite and containable to my young mind.

Set as a series of flashbacks at a funeral, Barry’s art knocked me out. I loved the different incarnations of Iron Man and the sense of progress that was held within the strip. Much later, I would have the privilege of co-creating Rune with Barry during my long tenure as Malibu Comics Editor-In-Chief.

After consuming this issue, Iron Man instantly became my favorite character of all time. I knew it in my guts — but I couldn’t have told you why — at least not then.

Iron Man was born the same year I was — 1963. He debuted in Tales of Suspense #39 and was created by Stan Lee, Larry Lieber, Don Heck and Jack Kirby. 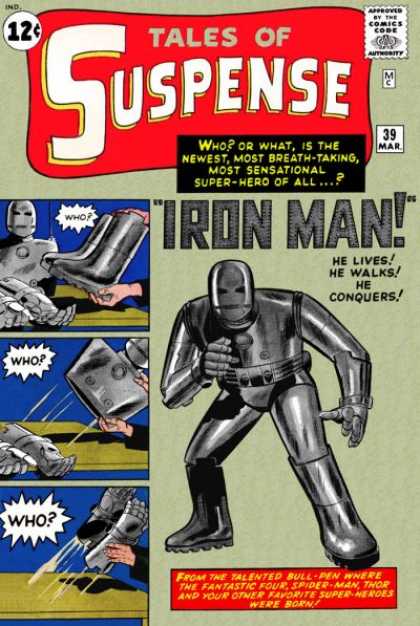 Stan is reported to have wanted to create a businessman hero patterned after Howard Hughes (in Hughes’ glory days). Lee wanted to create a rich industrialist, a munitions maker, that would be exactly the kind of character that the readers would reject.

“… I thought it would be fun to take the kind of character that nobody would like, none of our readers would like, and shove him down their throats and make them like him,” Lee explained.

Which was actually very true. Tony Stark was pretty damn unlikeable but his creation was awesome. Iron Man was instantly more captivating to me than any of the other Marvel pantheon. 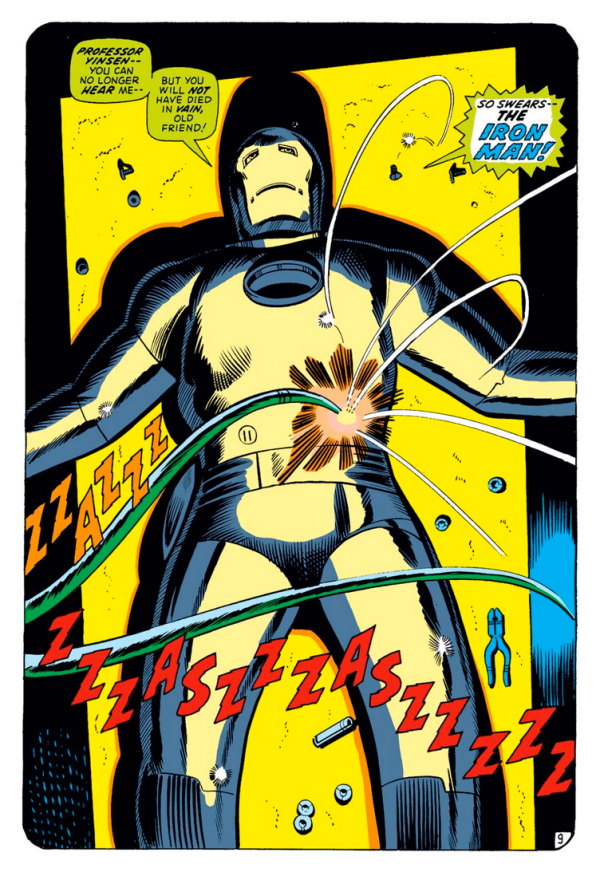 I admired Captain America. A lot. As a young pre-teen, I found that green trash can lids made excellent Adamantium shields and my brother Eric made an equally excellent Red Skull — it was actually amazing how far trash can lids can be flung with enough determination. So Cap was great. And he was right in Tales Of Suspense next to Iron Man.

And Spider-Man was likeable and funny. Couldn’t get enough of Spidey.

But I didn’t want to BE Cap or Spidey. I liked to read about them. When I read Iron Man, I imagined myself in the role of Tony Stark. It actually helped that Tony was a cipher. Really, Tony was either Reed Richards with a welding helmet, Don Draper with a pimpy mustache or a whiny drunk in need of therapy. Sometimes he was all three in the same issue. 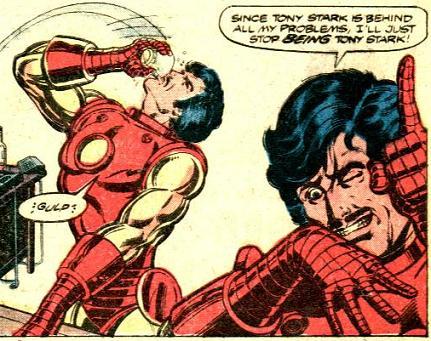 (In fact, my secret shame is that I didn’t like Tony Stark at all until Robert Downey Jr. so brilliantly gave him a personality injection in the first Iron Man movie.)

But I didn’t need to.

In the Silver Age, Cap was a Goody Good, Spidey was a Loser, Thor was a Shakespearean Stiff and Ant Man was … well … ANT MAN.

Tony Stark may have been a giant douche but Iron Man was AWESOME.

Unlike the vast majority of the Marvel Universe, Iron Man was not a radioactive accident or a product of faulty cosmic ray shielding. Nor was he created by the activation of a happenstance X-gene or being born to the right All Father. No, what I loved about Iron Man is that he is the only Silver Age Marvel character that created himself.

(I refuse to count Ant Man). 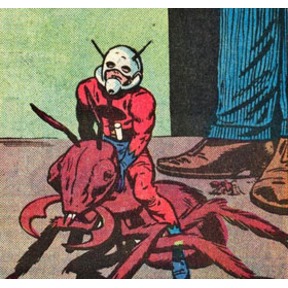 Iron Man changed all the time. Iron Man had the same advantage over the other heroes that Homo Sapiens had over the rest of the hominids. Now there were some misfires, most notably the nose: 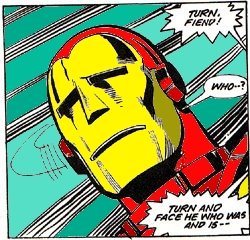 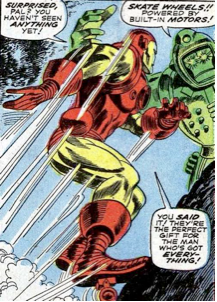 See, if you want to be Batman, you have to take on a lot of emotional baggage. There is no Batman without the death of Bruce’s parents. There is no Batman without the ongoing evil of Gotham City to motivate him. Not true for Iron Man. Stark can be tinkering in the sunlight of Malibu in between assignations with strippers. Even Stark’s problems are all self-created. He’s a drunk. He treats women like dirt and can’t commit. He throws away his money and lets evil corporations buy him out. All his own fault.

I just knew I could have done so much better, given a big slice of genius and inexhaustible resources.

And in a sense, I have, with my very own Iron Man suit. My good friend, a gifted artist and partner in Appy Entertainment— Farzad Varahramyan — was all too aware of my Iron Man fetish and, after my twin daughters were born gifted me with his own interpretation of the Golden Avenger: 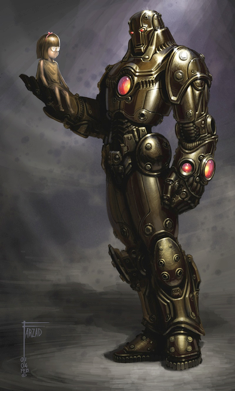 Iron Man 3 opens on my birthday. I’ll be there. 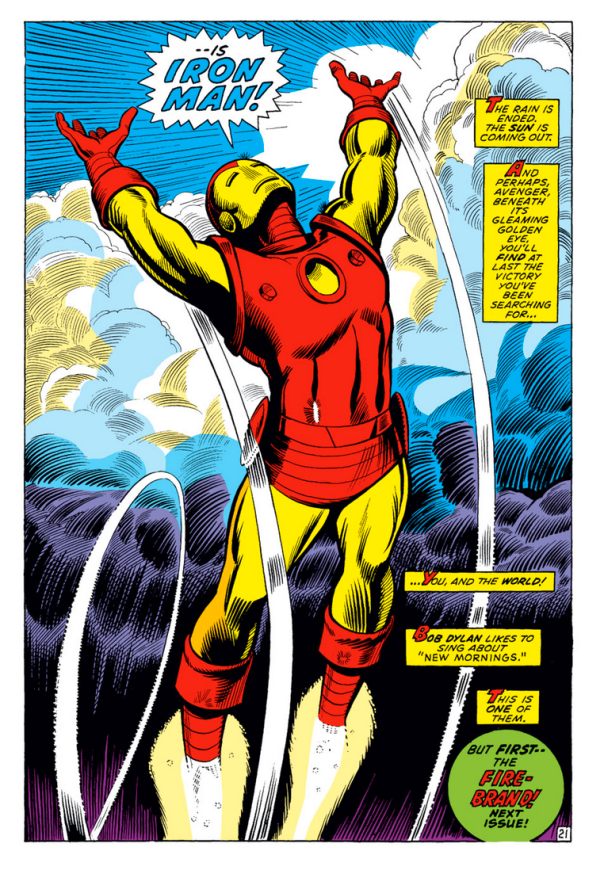 Thanks to Chris Ulm for this week’s blog!

NEXT WEDNESDAY: #99 A Secret Wars Apologist

I am a student at Carillo Elementary School. This is my first blog.
View all posts by erinulm »