I try to keep Longbox Graveyard laser-focused on Silver and Bronze Age superhero comics, but I do take the occasional detour, whether I’m looking at the latest in digital comics technology, reviewing a popular comic series of the present century, or lauding a contemporary animated series for emulating the kinds of comics I loved in the 1970s.

I also have an affection for Conan the Barbarian — in both his literary and Marvel Comics forms — and this week’s subject at Longbox Graveyard owes an obvious debt to Robert E. Howard’s immortal fantasy hero, which is reason enough to depart a bit from my normal purview.

The year was 1983, a year after Arnold Schwarzenegger cemented his international celebrity by playing Conan on the big screen, and the public was hungry for sword & sorcery action. Nowadays, it seems like every Christmas brings us a Lord of the Rings or a Hobbit or some other fantasy epic, but thirty years ago — before the advent of computer-generated special effects — bringing fantasy properties to the silver screen was a dicey proposition.

A pioneer in adult filmic fantasy was Ralph Bakshi, who (along with Don Bluth) was about the only American film producer of the era trying to make a go of feature animation outside of Walt Disney Studios. Sensing that the time was right for a big screen sword & sorcery epic, Bakshi partnered with his longtime friend, the legendary artist Frank Frazetta, to make Fire And Ice. No stranger to fantasy, Bakshi had already created Wizards (1977) and an incomplete version of Lord of the Rings (1978) using the same rotoscoping process that would drive Fire And Ice, where live-action footage was traced over by artists to create the final animated product.

Fire And Ice had an impressive comic book and fantasy pedigree — thanks to a script by Marvel Comics scribes Roy Thomas and Gerry Conway — and of course Frank Frazetta’s DNA is thoroughly entwined with fantasy art and comic books. But despite lofty ambitions, Fire And Ice is never more than an average movie, mostly owing to a predictable story and on-the-nose characterizations. The plot is a straight-ahead battle to the death between kingdoms of fire and … uh … ice (bet you didn’t see that coming) with a loin-clouted hero and a princess in peril caught in between. Our cast never surprises — they are Noble Savage, Evil Wizard, Mysterious Warrior, and Kidnapped Princess for the entirety of the film’s 81-minute run time. The on-screen action is sometimes diverting, but the score is forgettable, and the voice work merely adequate (with Steve Sandor’s anachronistic Darkwolf somehow the best of the bunch).

In today’s era of plentiful, big-budget fantasy movies, there’s little to recommend Fire And Ice. Even the Frank Frazetta connection is misleading, as the film’s budget didn’t permit Frazetta’s gorgeous, painterly visions to come to life. While rotoscoping conveys convincing motion, the action is mostly confined to a few lesser brawls and running (endless running!) through fantasy backgrounds painted by getting-their-start artists like Dinotopia’s James Gurney and “Painting With Light” artist Thomas Kinkade.

No, the main reason to watch Fire And Ice all these decades later — and the reason I’m covering it here at Longbox Graveyard — is that is is fun for fans to play “Spot-The-Frazetta.” The film’s quality doesn’t approach Frazetta’s painting and illustration work, but Frazetta was a full and committed collaborator in this film, and it’s fun to see his compositions, set pieces, and favorite visual concepts peek out from behind the film’s curtains.

The movie opens with some Frazetta pencil art that I don’t think I’ve seen anywhere else (and could well be concept art for the film).

Princess Teegra is a classic Frazetta girl come to life, and watching her roll around is pretty much the main event of Fire And Ice.

Much of the film’s suspense comes from hoping Teegra will bounce out of the six-square-inches-of-silk that passes for her wardrobe. (Sadly, the costume’s functional quality proves as unlikely as Teegra’s anatomy).

I think I spot Teegra’s origins in Frazetta’s “At The Earth’s Core.” 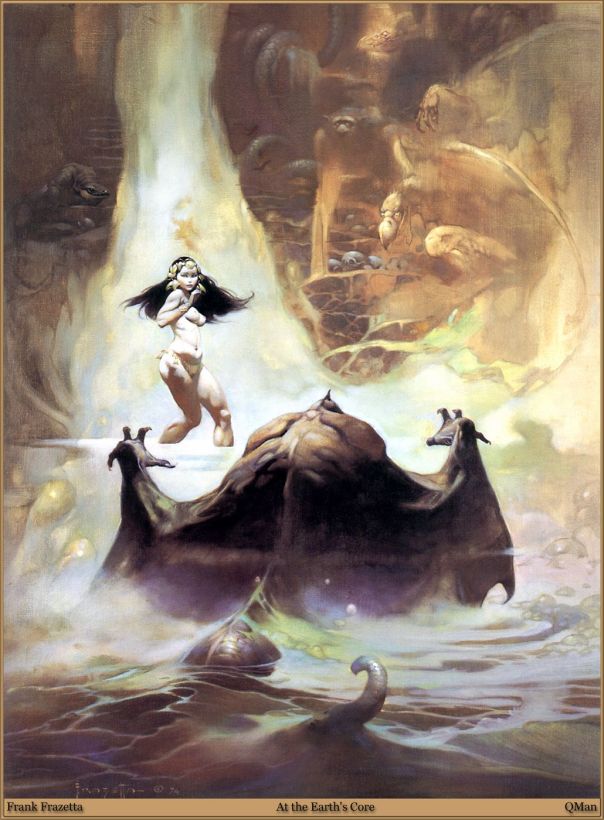 There have to be sub-human savages to threaten our girl. There. Have. To. Be. 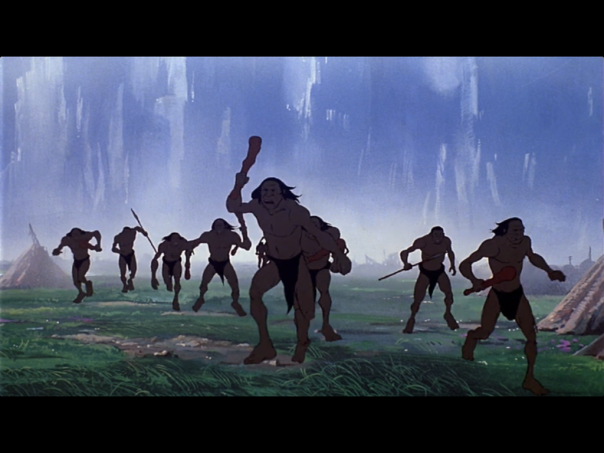 There are a couple monsters, the best of which is this swamp dragon. 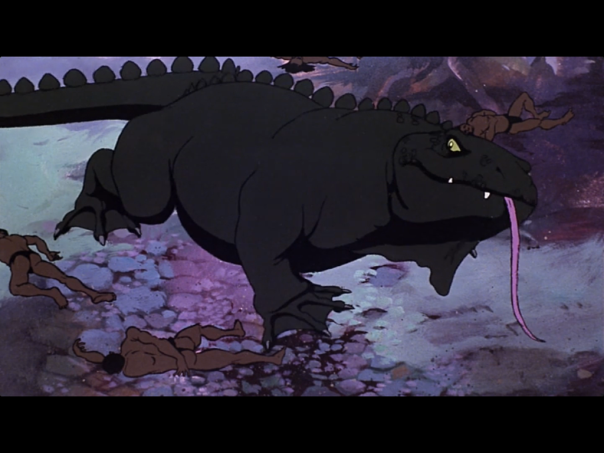 Our noble savage faces down some wolves, which really isn’t much …

… but it’s interesting to see how even that scene’s palett was likely translated from Frazetta’s “Wolfmoon.” 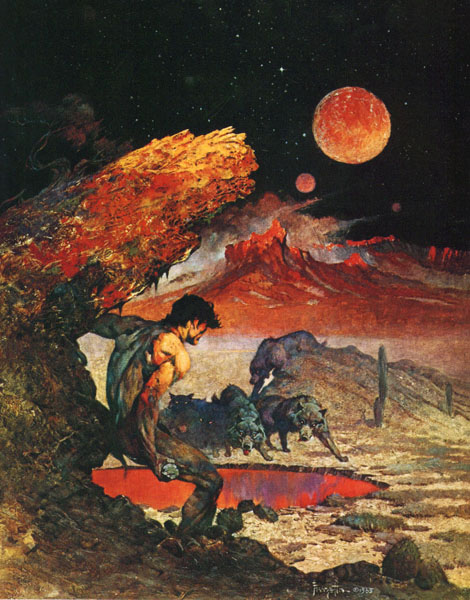 Darkwolf is the prototypical Frazetta barbarian.

That pose above reminds of Frazetta’s “Berserker” …

… and our last look at Darkwolf is even easier to recognize …

All of which is fun, but only you can decide if this is enough to schedule your own viewing of Fire And Ice. The movie is readily available on home video, via Netflix streaming (where I recently re-watched it, for the first time since seeing it on it’s original run). The full movie is even on YouTube. There are worse excuses for revisiting Frank Frazetta’s art, and who knows … maybe I missed a frame where Teegra’s silk bikini failed to protect her virtue.

NEXT WEDNESDAY: #88 The Last Days of Superman