Farewell To The King

Jack Kirby’s mid-1970s return to Marvel Comics was a mixed blessing. It was nice to see Jack back at the comics company that he helped to build, and the King did produce some imaginative work in this period. I enjoyed Kirby’s idiosyncratic take on Black Panther, and the Eternals got off to a promising start before untimely cancellation consigned another Kirby cosmic space epic to the dustbin of history. And of course there was Devil Dinosaur, Machine Man, and 2001: A Space Odyssey.

It was Kirby’s return to his signature character that most disappointed me, then and now.

Maybe you just can’t go home again. Or maybe Jack was running on empty with Captain America — after all, he was pushing sixty by this time, and he’d been penning Cap’s adventures for thirty-five years, first with co-creator Joe Simon in Cap’s original Golden Age run, and later with Stan Lee as Cap was catapulted into the Silver Age in Tales of Suspense. Elevated expectations may have been part of the problem, but Kirby’s 1976 return to Captain America did not seem all it could have been.

Jack’s concepts were strong. Actually, they were inspired. A psychic bomb that could destroy the country … a secret society of criminal aristocrats determined to create an American monarchy … an inter-dimensional insane asylum … a demonic force from the end of time walking the earth as a powerful undead corpse … all of those ideas sound great! But for the most part, in execution these ideas came off flat. Maybe Kirby was trying to do too many comics at once, or maybe his playbook was showing its age, and the old approaches weren’t working any more. 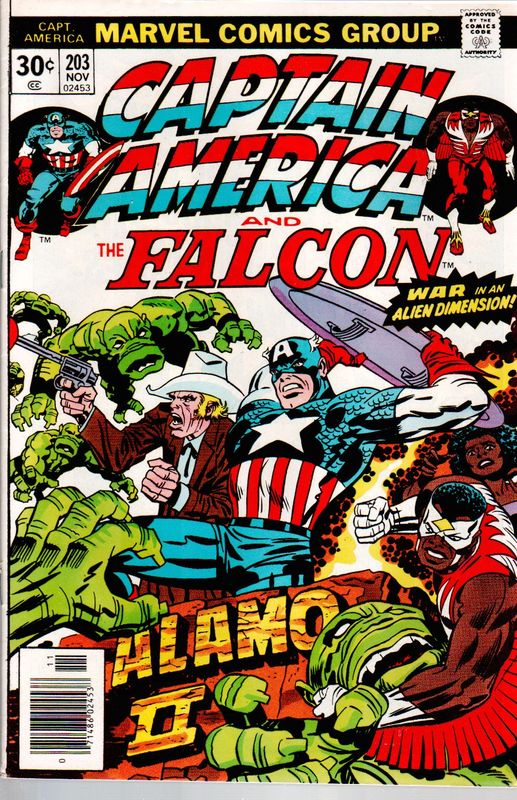 speaking as a fan of Captain America and Jack Kirby, I’d rather NOT remember Alamo II

Whatever the reason, the King’s mid-seventies two-year run on Captain America wasn’t a happy one, characterized by some of the most negative letters pages I’ve ever read in a Marvel book. Kirby had his supporters, but many letters took Jack to task for clunky scripting that siloed Captain America from the rest of the Marvel universe, and ignored the more nuanced version of Cap previously developed by writers like Steve Englehart in favor of Kirby’s self-assured, two-fisted man of action (and for more insight about the letters pages of this era, check out Scott Edleman’s blog).

I was among those disappointed legions. When triaging my Accumulation, I was surprised to see I only had about half of this run, which meant I gave up on Jack’s vision for Cap when I first read it at the age of fourteen. I recall being disappointed that the Cap I saw in the Avengers had so little to do with the Cap in Kirby’s book. I’d like to blame my dissatisfaction on callow youth, but a recent back-issue purchase let me complete this run at last, and I must admit the re-read was a disappointment.

I’m not tone-deaf to Kirby’s style. In fact, I like the Kirby approach much better now that I am older and no longer take comics so seriously (said the man with the weekly comic book blog). I recently re-read Kirby’s Mister Miracle, which is just as old-fashioned as this Cap run, but Mister Miracle benefited from greater flights of imagination and richer characterization than Jack’s return to Cap. I can’t help but feel that Kirby was going through the motions here.

But then right when I was about to write this series off entirely, out of nowhere, Kirby attacks!

One second, Cap is waltzing around the jungle with a generic Central American dictator, and the next … 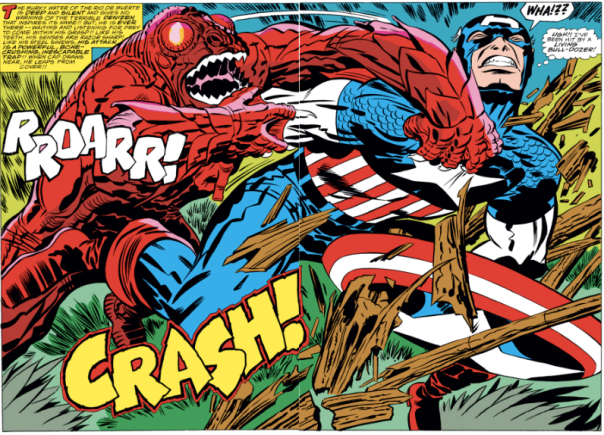 It’s Jack Kirby cutting loose! Here, at last, in issue #208 of Captain America, the King is back, delivering on the promise not quite realized in his previous dozen-odd issues.

For all his energy, though, the Man-Fish was just a monster, and Cap had fought plenty of monsters in Kirby’s run. What made this monster special was that he heralded the arrival of Kirby’s last great contribution to the Captain America Canon …

The goofy-looking Arnim Zola might be easy to dismiss if he didn’t represent a very real modern anxiety, as Kirby outlined atop the splash page to issue #209.

But rather than bore us with cautionary tales about cloned sheep, Kirby expressed his disgust for genetic manipulation with monstrous creations like the amorphous Doughboy …

… or a living citadel that shapes itself into horrific forms, both to menace the lovely Donna Maria …

… and to threaten Cap and Donna when they later try to escape. 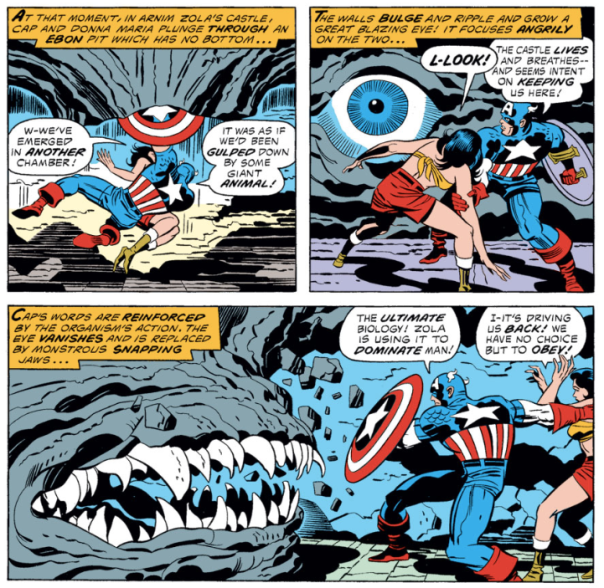 That Zola was so pleased with the horrific results of his transformation speaks to the sickness of his mind. We can safely conclude that Cap was not a fan.

But Kirby wasn’t done. As if a story featuring synthetic monsters and the Red Skull weren’t enough, Kirby goes to even stranger depths, first by detailing a bit of Zola’s mad handiwork … 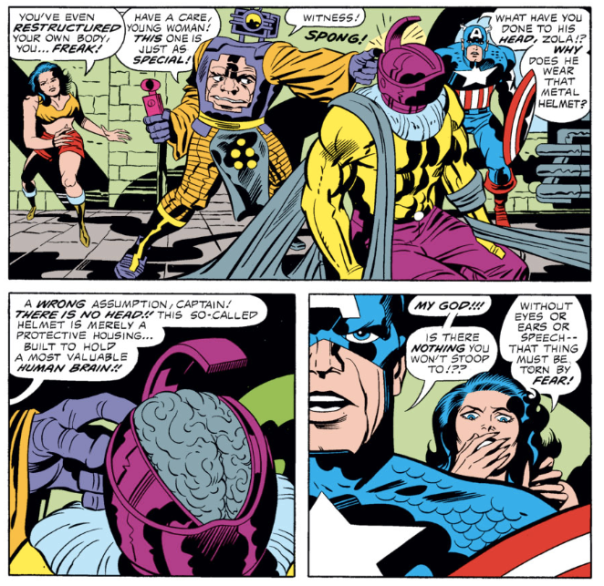 … and then by offering his own spin on They Saved Hitler’s Brain!

I’m sure some later writer sorted out how Zola’s Hitler brain-in-a-box was reconciled with Hitler’s post-war identity as The Hate Monger, but it’s above my pay grade to look it up. Suffice to say this story already had it all even without Hitler’s brain!

But even without Hitler’s brain, this would be a classic Cap story, if only because of The Red Skull. No one drew a more decayed, corrupt, and evil Red Skull than did Jack Kirby, and seeing the Skull one more time was a special treat.

The tale comes to an abrupt but appropriate end as Cap and the Skull slug it out in the collapsing ruins of Zola’s castle, as they had done in the ruins of Hitler’s Germany.

But that would be the end for Jack Kirby and Captain America. His Arnim Zola arc was energetic and entertaining, and might have been an indication of better things to come, but after issue #214, Kirby would leave Cap (and Marvel comics) behind forever.

Kirby’s future lay in animation, while Cap would once again be just another Marvel Comics superhero book, neither very good nor very bad for years to come (and this particular Cap fan thinks the series didn’t really find it’s groove until Ed Brubaker came aboard three decades later). Most of these stories would fade from memory, but Arnim Zola haunts me still, though I can’t quite get used to his mainstream movie incarnation …

All-in-all, this run of Captain America is not how I would have chosen to say farewell to King Kirby, but all things have their time, and it had to end somewhere. And thanks to the terrifyingly bizarre Arnim Zola, I didn’t have to spend my final words about Kirby’s Captain America trying to find something nice to write about The Swine and General Argyle Fist!

The King is dead. Long Live The King!