Last November, Flodo was kind enough to honor me with a Reader Appreciation Award, and it took me all the way to 2013 to finally return the favor!

The Reader Appreciation Award is a blogging chain letter of the benign variety, an excuse to say, “thank you” to blogs you enjoy, and pay your thanks forward with an easy bit of blog fodder for your friends to write about. You can find the details at Flodo’s post, which started this all for me, but in a nutshell, by accepting this award I am compelled to …

1) Thank the blogger who gave me the award (thanks, Flodo!), and link back to their site.

2) Pick a dozen or so blogs that entertain and inspire me and link to their sites, thereby nominating THEM for this same honorific:

Besides good Flodo, of course, in no specific order I count the following comics book blogs among my favorites:

Mars Will Send No More

Diversions of the Groovy Kind

The Peerless Power of Comics

The Marvel Age of Comics

Worthy sites all, for reasons too numerous to list … I hope you will include them in your blog rotation! (And apologies if I overlooked your site in my survey).

3) Answer ten questions provided by the blogger who put my name up for the award (which follow below).

4) Add ten questions for my nominees to answer (and here I will lay up and request that my nominees answer Flodo’s excellent questions, just as I have).

5) Include the Reader Appreciation Award Award logo on my site.

Yuck, the logo is horrible. But a deal is a deal: 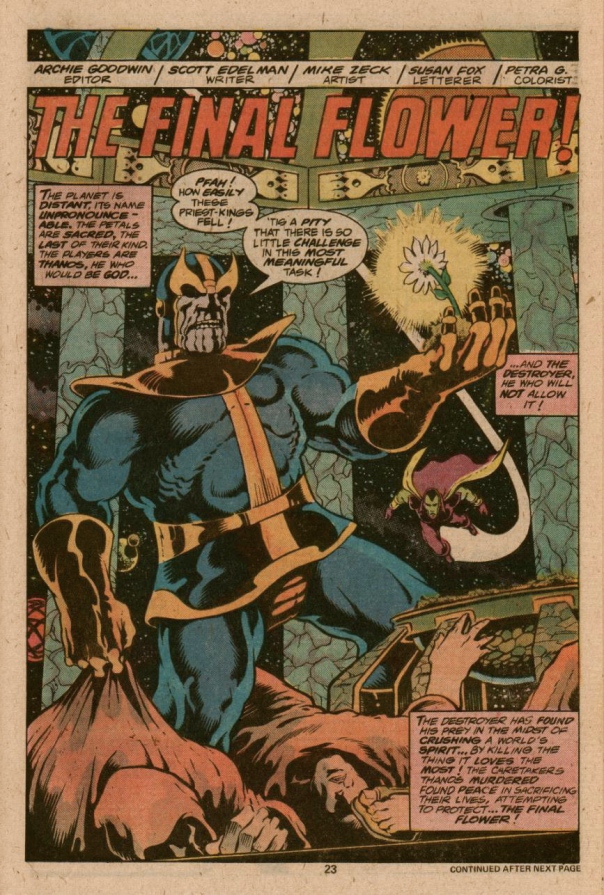 Maybe a more Photoshop-savvy blog downstream from me can do something with Mike Zeck‘s Thanos image above so we can send that yellow flower back to whatever Geocities site where it originally bloomed!

6) Get in touch with my own nominees to let them know about the award, and invite them to keep the chain going!

And so on to Flodo’s questions!

1. DC, Marvel or Other? Which comics publisher is your favorite?

I am a Marvel guy, I suppose, that is where I started, Marvel books comprise the majority of my Accumulation, and most of my columns here at Longbox Graveyard have concerned Marvel titles. The record is clear! I stand naked before your baleful eye of judgment.

2. Who is your favorite writer or artist currently working?

Regular readers of Longbox Graveyard will know that I am stuck in 1978 (though I did recently offer some Best of 2012 praise for Saga). I don’t read a lot of contemporary comics but I am a great admirer of Ed Brubaker’s writing on titles like Captain America, Criminal, Incognito, Catwoman, and Gotham Central.

3. Who is your favorite writer or artist from the past?

not quite what I had in mind, but it’s a start

But here I am talking pencilers like an amateur, where professionals such as we should really be talking inkers … but that’s a whole different blog, and I’ll save that topic for later.

4. What superhero do you think makes the best team player?

5. Whose superhero costume do you hate the most, and why?

It’s an obscure thing to hate, but I really dislike the new version of Star Lord from the rebooted Guardians of the Galaxy. He looks like a bellhop with a radiator grill for a face. (And more about Star-Lord shortly!)

6. If you could bring one title back from comic book limbo what would it be?

For the most part I like the past to remain in the past. I just wrote an appreciation of Captain Marvel that I might have to entirely reconsider if that character was brought back in any meaningful way. If I could grant a blanket amnesty I suppose I’d bring back the entire range of Malibu’s Ultraverse characters, either on their own or as part of the Marvel Universe.

Trying to pick the “best” is a blog post all by itself (hmm …), but I’ll give you a favorite, and one not often referenced:

I never got much into them myself, but I write a weekly comic book blog. That’s what’s known as a “glass house” and I ain’t throwing stones at anyone.

9. What was the best comic book single issue that you read in the last 2 months?

In the last two months? Honestly, it was the Claremont/Byrne/Austin reboot of Star-Lord from Marvel Preview #11, which I will get around to writing about here at Longbox Graveyard sooner or later. Told you I was stuck in 1978! (And now maybe you see why I dislike that new costume).

10. Finally, the age old question: if you were writing, who would win a fight between Superman and Hulk? What’s your logic?

If I was writing a Superman/Hulk fight I’d write whatever my cruel corporate masters at Marvel and DC told me to write! And then I’d cash that check, baby!

Thanks to mighty, green, and amorphous Flodo for thinking of me for this recognition, and thanks to all the worthy comic book bloggers everywhere who provide us with a free flood of love and joy for this art form we all admire.

NEXT WEDNESDAY: #83 Farewell To The King