The Christmas season is traditionally a slow time for newsstand comic book sales, so you can’t blame Marvel Comics for trying to create some holiday cheer with with their 1975 Giant Superhero Holiday Grab-Bag … but would it have killed them to hunt up some actual holiday-themed stories for their holiday-themed collection? “Marvel’s Yuletide Gift To YOU!” turns out to be a lump of coal!

It starts well enough, with a genuine grab-bag of superheroes hanging stockings by the chimney with care. Luke Cage thoughtfully drapes the tree with chains, but I’m not sure which is more disturbing — that the Hulk must have mugged a plus-sized Santa to get that St. Nicholas suit, or that Nick Fury thinks its appropriate to attend a tree-trimming in a bondage costume.

It’s a charming bit of hokum, and it appeals to me now just as it did in 1975, when I bought this book off the rack. As a thirteen-year-old I appreciated anything that connected my comic book world with the spirit of the season, and I especially enjoyed those monthly books that included Christmas content in their December issues (especially considering that the teams must have been sweating out a New York summer when they first created those pages). But if my regular comics adventures couldn’t manage some snow and mistletoe, then a big holiday reprint collection was the next best thing.

And I do mean big. This Holiday Grab-Bag was a part of the Marvel Treasury Edition series — a big, over-sized, 10″ x 13″ edition (and for more about Marvel’s Treasury Editions, check out the spectacular TreasuryComics.com). That means this Grab-Bag wasn’t the usual Marvel reprint — it was a double-sized reprint, providing an unusual opportunity for Marvel fans to see their favorite characters big, blown-up, and beautiful.

So why oh why does Marvel lead this edition with a story penciled by Frank Springer? 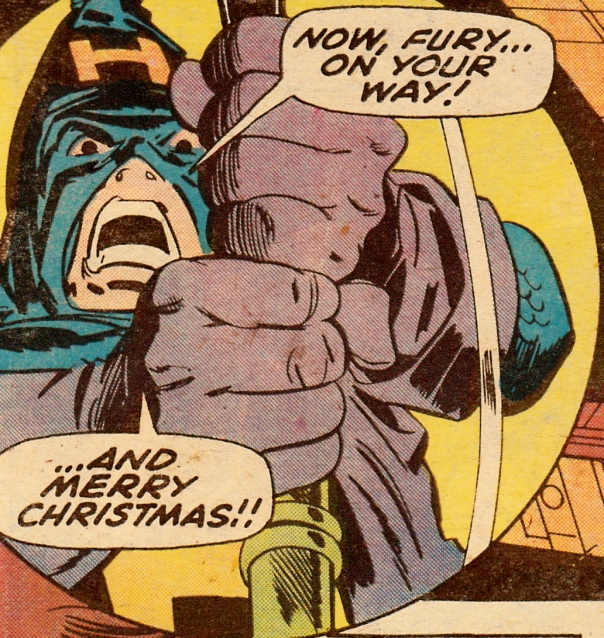 Actually, as Frank Springer goes, this tale isn’t bad. Originally appearing in Nick Fury, Agent of S.H.I.E.L.D. #10, ‘Twas The Night Before Christmas” shows some ambition, starting with a typographic splash page in the Will Eisner/Jim Steranko tradition. 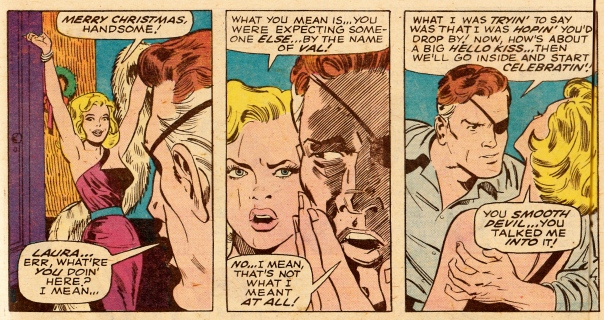 This is a Nick Fury comic, so the mushy stuff doesn’t last long, and before you know it Nick is called away by S.H.I.E.L.D. to battle Hate Monger (née Adolph Hitler) on the edge of space, foiling a plot that involves germ warfare, an atomic bomb, and (just maybe) Santa’s sleigh!

But it’s all in a night’s work for S.H.I.E.L.D.’ top cop … and even more impressive is that ol’ Nick doesn’t miss a beat when he returns home to find his paramour (whatever her name might be) still in her Christmas Eve party dress. Hey, there’s a reason we named Nick Fury the manliest character in all of superhero comics!

I’ve made the story seem better than it reads. This is a pretty by-the-numbers Nick Fury tale, the best part of which may have been the original cover, which sadly appears only in black & white on the inside back cover of this Grab-Bag Treasury Edition:

It’s a silly tale with a poor conclusion and it doesn’t do Frank Springer any favors showing his art at this expanded size. But you know, compared to the stories that follow, this tale looks like The Great Gatsby.

Take the next tale, for example — a reprint of “Spider-Man Goes Mad!” from Amazing Spider-Man #24. This is a great Spider-Man story — maybe my favorite single-issue story from the unmatched Steve Ditko/Stan Lee run on Amazing Spider-Man. Spider-Man is attacked where he is most vulnerable by a mystery villain — directly in his neurosis, triggering a near-psychotic experience and a genuine crisis of confidence for Web-Head.

The only problem is this story has nothing to do with the holidays (aside from the part about losing your mind). I looked in vain for a street Santa or a wreath or a menorah or even a throw-away line referencing the time of year but no luck — this is a seasonally-neutral superhero tale. Treasury-sized Steve Ditko is always welcome (and I’ve devoted an entire post just to blowing up Mr. Ditko’s Spider-Man panels), but however much I like this story, it’s a peculiar inclusion for a holiday collection. (And a question for Spider-Man scholars — was there a worthy pre-1976 Spider-Man holiday story that might have better served here?)

The holiday returns (though the quality does not) in the next tale, reprinting “Jingle Bombs” by Steve Englehart and George Tuska from Luke Cage, Hero For Hire #7. Sadly, Luke does not decorate Christmas trees with his belt-chain, as he does on this collection’s cover, but this story does have Luke doing what he does, with a holiday twist, like making out in the snow with his foxy girlfriend:

The plot is a muddle, with Luke bedeviled by some quick-changing knucklehead who tests our hero with moral dilemmas before ultimately threatening to blow up New York with an atomic bomb. It doesn’t make a lot of sense, and as was the case with Mr. Springer, George Tuska doesn’t immediately leap to mind when listing the Marvel artists I’d like to see in double-size format.

But this tale does get points for being a holiday story — there’s even a Santa Claus in it. There are also some vintage Luke Cage moments, like his quasi-hippy rant over “Freakin’ GUNS!” …

Overall, this story is just a little bit better than the Nick Fury issue that leads this collection. It’s full of snow and Santas and it is neither very much better or very much worse than other Luke Cage stories of the era.

Except for one problem (and it’s a big one).

How can we get through an entire issue of vintage Luke Cage — a Christmas issue, especially — without Luke exclaiming, “Christmas!” ?? 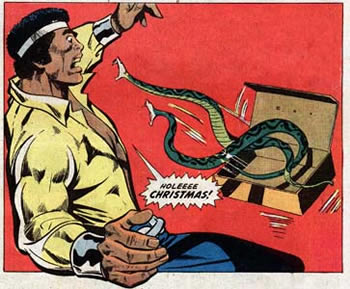 NOT from the Giant Superhero Holiday Grab-Bag

At least there’s snow on the ground in Luke Cage’s story — something that can’t be said for the next story, “Heaven Is A Very Small Place,” from Incredible Hulk #147 by Roy Thomas and Herb Trimpe.

This story looks great in the expanded Treasury format, with Trimpe’s pencils softened by the skillful sable brush of John Severin. 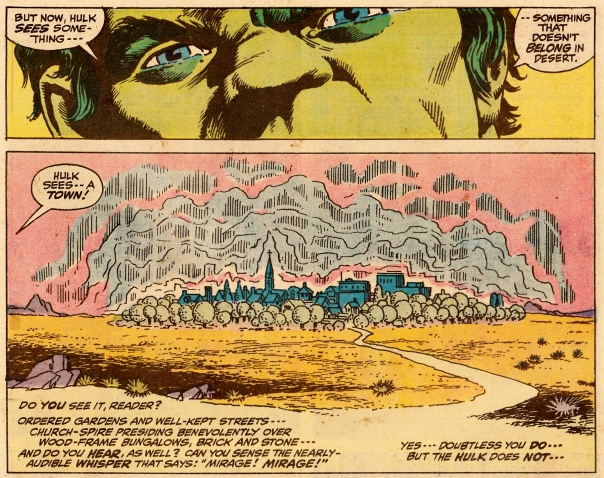 This is a short, nine-page story with the Hulk coming to the usual heartbreak in the illusory town of his dreams. It’s thin on supervillains and smashing but it is a well-told and heartfelt story. Again, the problem here is that this is not a holiday tale. It’s too much to expect snow in a desert mirage town, but there isn’t even a hint of Hanuka here. If you squint just right I suppose there’s an echo of It’s A Wonderful Life on display but with none of that classic tale’s uplifting reason-for-the-season message.

It isn’t spoiling much to reveal that the Hulk feels safe and at home in his idyllic hometown-of-the-mind, before it is all yanked away from him. That’s the way it had to be, because this is an early 1970s Hulk story …

… and because nothing says “Christmas” like a tormented man-brute!

Our Giant Superhero Holiday Treasury Edition has been a (mixed) Grab-Bag so far, and it’s all down to the fifth story — “Eternity” from Doctor Strange #180 by Roy Thomas & Gene Colan — to determine if our collection will ultimately prove naughty, or nice. And there is some cause for optimism here. These Gene Colan/Tom Palmer pages look as spectacular as you would expect in this expanded format, and the tale nails it’s holiday bona fides early as Strange and the lovely Clea hook up for a New Years Eve date.

The story unwinds at a languid pace, offering touching insight on Strange & Clea’s relationship. For for a panel or two, this story is as snuggly and seasonal as a Norah Ephron rom-com.

… and BONUS bonus points for the inevitable supervillain attack taking the form of a rampaging T-Rex!

Alas, it all ends in tears.

First, there’s the unfortunate fact of Doctor Strange’s costume, dating from that forgettable era when Earth’s Sorcerer Supreme wore a full-face mask to conceal his identity from extra-dimensional, mind-reading alien gods. Of Marvel’s many costume-revision gaffes, putting Doctor Strange in a ski-mask ranks second only to giving Iron Man a nose.

Second … this tale ends in the middle! No sooner does the Big Bad stride into Times Square than we get this lame denouement telling us that the Marvel Bullpen wishes us a swell time and get the hell out, kid, you’re out of pages even if the story is just getting started! 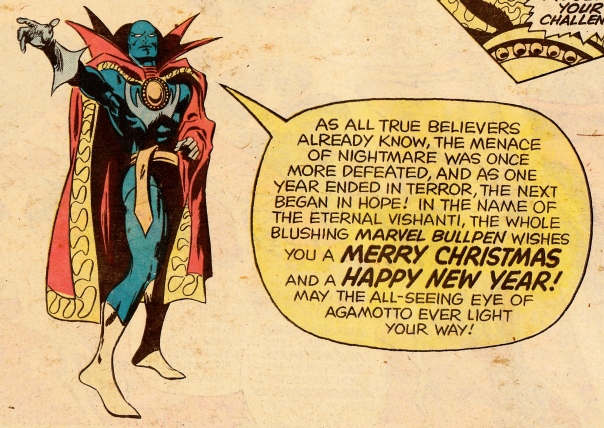 And so the Giant Superhero Holiday Grab-Bag turns out to be a lump of coal after all — a haphazard, thrown-together box of parts that don’t fit, comprised of stories with no business being in a holiday anthology and a New Years Eve tale that makes us go home right when the clock strikes midnight!

But, you know … when it comes to gifts, it is the thought that counts, and there is that great front cover, and the back cover isn’t too shabby either …

… and shucks, there’s Santa Claus waving at us, and even the Hulk is smiling. Having just torn this collection apart, I still get a warm feeling when thinking about this book — maybe because it transports me back to a simpler time when it was just cool to have superhero friends for the holidays. After all, in 1975 you couldn’t walk into a book store and find row after row of graphic novels or superhero movie tie-ins. These geek ways were held more closely then, and we were happy with what we got, whether it was Hulk in a Santa suit, Doctor Strange in a body sock, or just a collection of moldy old Marvel superhero stories to read under the tree. They don’t all have to be books for the ages.

And so I am content with this “Merry-Marvel Season’s Greetings To One And All!” … and please accept Longbox Graveyard’s greetings, wherever you may be this holiday season. Be peaceful to each other, and thank you for reading this blog, on Christmas and every other day of the year!