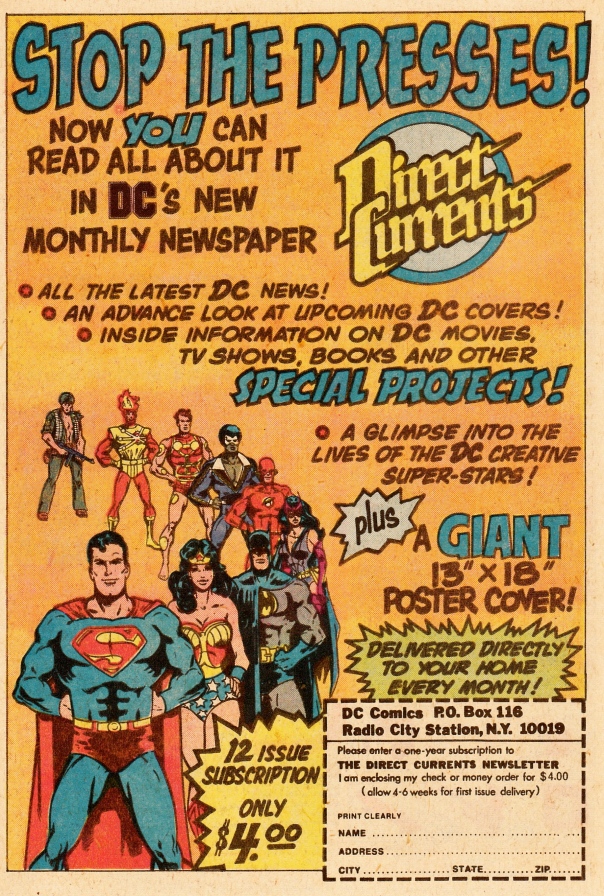 Like Longbox Graveyard, these Super Tuesdays have showcased a lot of Marvel Comics material, but I don’t mean this as a slight to DC Comics.

It is true that I am more of a “Marvel Guy” than “DC,” but this mostly reflects the composition of the Accumulation I showcase here at the blog. For example, I’ve been reading a lot of the DC New 52 collections lately … but haven’t felt a need to write about them here. And since I started my Super Tuesday series, almost all of my scanning time has been devoted to support of older Marvel books, so there’s been little opportunity to discover and capture vintage DC ads.

This notice for the DC Direct Currents newsletter did catch my eye, though, and I’m especially interested if that “giant” 13 x 18 poster cover was really a poster or just the cover of a newsletter. It’s also interesting to see the characters DC chose to spotlight in this ad, with Black Lightning and Steve Ditko’s Shade The Changing Man stuck near the back of the lineup. Sgt. Rock brings up the rear, gun at the ready, like he’s marching the other heroes off to some grim, marketing-driven fate.

I assume Direct Currents was just marketing material, rather than a fanzine (reinforced by a look at these scans). In one form or another I recall the Direct Currents branding appearing on DC editorial pages through the 1980s.

Did anyone ever subscribe to Direct Currents? Let me know in comments, below … and someday I suppose I will have to further confirm my Marvel allegiance by writing about Marvel’s in-house fan mag, FOOM!

Join me tomorrow for another kind of direct current …