Look out! Longbox Graveyard is reviewing a comic that’s currently in print!

I may be stuck in 1978 but even I can’t escape the multimedia success that is Robert Kirkman‘s (and Tony Moore’s) The Walking Dead, which is beginning it’s third season on AMC even as it sets sales records with it’s one-hundredth issue. Yet I still might never had read this series if not for my bloodthirsty teenaged son, who insisted I pack along his favorite comics series in the form of the first Walking Dead Compendium on a recent vacation.

(Yes, a thousand pages of flesh-eating mayhem passes for a ‘beach book” here at Longbox Graveyard.) 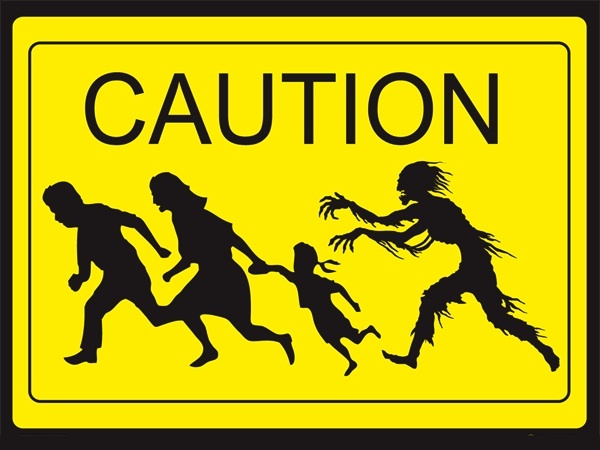 zombies can bring a family closer together

I suppose I qualify as a bad dad for providing these comics to my lad without vetting them first, and reading the series I did blanch a bit, realizing that my boy had preceded me into this maelstrom of blood, death, rape, and betrayal. But my boy is discerning, with a critical eye, and Walking Dead has gone on to become a talking point for us (as was the case the with Frank Miller’s Holy Terror), and in any case in this connected age I consider it impossible to dig a trench around my kids to protect them from this kind of content. Better we should enjoy these things together, along the way giving me a chance to provide my lad with some of the tools and perspective he will need to make his way in our increasingly weird and violent world.

And what a world it has become, with zombies clawing their way into the mainstream. It wasn’t always this way! My first encounter with the living dead came courtesy of George Romero‘s Night of the Living Dead, first discovered in the pages of Famous Monsters of Filmland magazine, then later experienced, in all its black & white grindhouse glory, on a snowy television broadcast in the middle of the night.

Like a lot of pictures, Night of the Living Dead isn’t nearly so scary for children as it is for adults. Fortified as I was against the movie’s most shocking moments by having read everything about it first, I found Night of the Living Dead only mildly affecting as a twelve-year-old. It would take years — and adult perspective — before the movie first started to disturb me, with its message that our own fears and prejudices are the greatest threat of all, and (especially) that grim scene in the basement, where a mother is attacked by her own undead child.

I guess you could say I grew up with zombies. I saw pictures like the blood-spattered Dawn of the Dead at midnight shows, caught the campy Return of the Living Dead on VHS, and saw Evil Dead 2 opening weekend in a mostly-empty Hollywood movie theater. In more recent years I’ve watched the zombie formula stretch itself in unexpected directions — comedy (Shawn of the Dead), last-man-on-earth story (28 Days Later), and even a gonzo road picture (Zombieland).

one of several Zombieland rules to live by … and I’m working on the cardio, too

I suppose it was inevitable that the soap opera genre try its luck with zombies, and the The Walking Dead is definitely a soap opera, making the most of the long form drama soap operas provide. Unlike most zombie stories — which need to introduce, develop, and eviscerate their heroes in a single sitting — The Walking Dead has the luxury of time and space to develop its world and cast. The story is slow-moving — I likely would not have stuck with it as a monthly book — but with 48 issues on offer in Compendium form The Walking Dead makes for a superior long read.

The series may at first seem to lack for originality. Series hero Sheriff Rick Grimes wakes up alone, in an abandoned hospital, in a set-up that reminds of Danny Boyle’s 28 Days Later. He is behind the audience, of course, in piecing together that a zombie apocalypse has occurred (the tedious-but-necessary scene-setting burden of seemingly every zombie story), and his motivations are off-the-shelf: figure out what’s happened, find other survivors, find his lost family.

The first hint that we are in for something different comes at the end of the first issue, when Rick goes out of his way to return to the scene of a particularly affecting zombie encounter, to put the poor, immobile thing out of its misery with a shot to the head.

This sets the tone for what will become a theme of the series — that it is mercy, and compassion, that distinguishes the living from the dead. It is an uncomfortable realization, especially in a genre where zombies have become objects for all sorts of guilt-free kill-thrills, both in films and video games. They look like humans, see, and they blow up like humans, but it’s all OK, because they’re like, dead, right? No so the walking dead of The Walking Dead, where the story takes pains to point out that these bad guys stumbling around aren’t just some existential threat or fodder for target practice — they used to be like you and me, and like some modern-day Danse Macabre, we’re all headed that way ourselves, sooner or later.

It’s a shorter journey for some of us than others, and as the story later reminds, you don’t have to be dead to be among the walking dead. As in many zombie stories, survivors are often transformed in ways more horrible that the undead themselves, and The Walking Dead gives us some choice specimens to despise, where survivor communities have been founded on bloodsport and rape, and you often have more to fear from a gunned-up chance encounter with a living person than you do from a zombie popping out of the closet.

the Walking Dead’s “Governor” is quite a sweetheart

The Walking Dead starts off grim and gets darker as you go along. The art and story are consistent throughout as they track our little band of survivors through their undead odyssey, fighting for daily survival even as they come to terms with the fact that there will be no rescue — that life has changed forever, and for the worse. The long form of the story offers plenty of room for character development, but it is rarely of the good kind — for every hopeful pregnancy, marriage, or moment of human triumph there are decapitations, child murder, and amputations to spare. This first Compendium comes to a particularly gruesome conclusion and it isn’t spoiling much to report that the body count of The Walking Dead makes George R.R. Martin’s Game of Thrones look like Sesame Street.

Which is not to suggest you should avoid The Walking Dead. I put it firmly in the category of a “good” bad time, and not just for zombie fans. The extended format allows for readers to come to care for the characters, which ratchets up the tension when they get into one of the series’ trademark no-one-is-safe tight spots. It’s also fun to see Kirkman’s take on familiar zombie tropes, and to play the “what would I do to survive?” fantasy game in your own head as you confront, through fiction, the kind of disastrous world-after-tomorrow that drives so much of our daily anxiety in these troubled times. I even recommend The Walking Dead to fans of the television series, both because I find the comic superior to the show, and because the show and the comic have developed along sufficiently diverging lines that each has something fresh to offer (though the spoiler-adverse may wish to wait until the conclusion of AMC’s third season before plunging into this particular Compendium).

We live in miraculous times, my friends, where a black & white independent zombie book is still going strong after a hundred issues, a zombie soap opera is one of the highest-rated shows on cable TV, and Longbox Graveyard likes a comic from the present century. Rejoice!