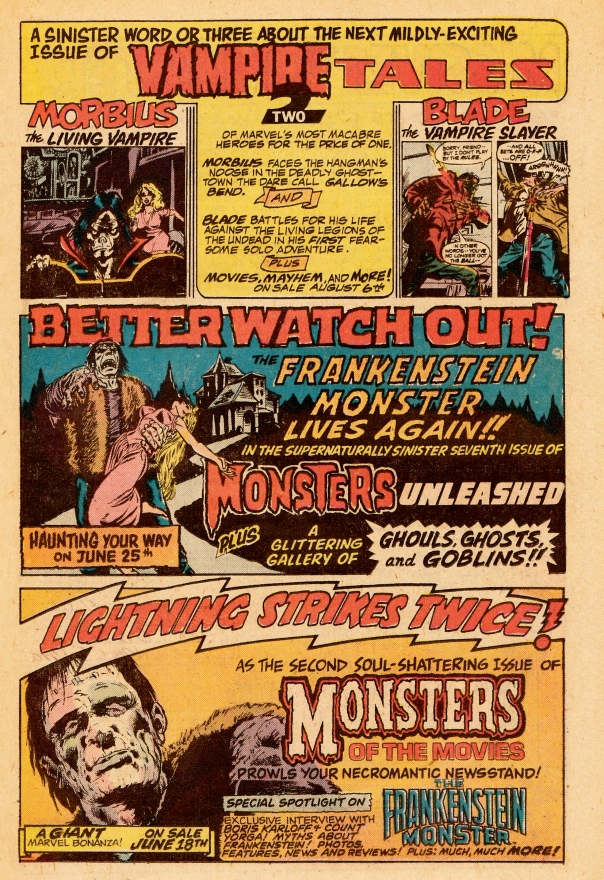 In the spirit of the Halloween season Longbox Graveyard this week presents a horror-themed Marvel house ad from 1974 or 1975 for Super Tuesday.

A relaxation of the Comics Code in 1971 cracked the tomb door for horror titles and Marvel didn’t waste any time jumping on this newest trend, publishing several horror titles in the early part of the decade, particularly focused on “classic” monsters like Dracula and Frankenstein, which enjoyed special legitimacy in the eyes of the Code thanks to their literary origins.

Additional license was granted by publishing through Marvel’s magazine line, which wasn’t governed by the Code. Two of the titles listed here were black & white anthology titles — Vampire Tales and Monsters Unleashed. The third title was the short-lived Monsters of the Movies, Marvel’s answer to the legendary Famous Monsters of Filmland.

None of these magazines would last much more than a dozen issues or so, and for the most part Marvel’s horror comics were a flash in the pan, with the notable exception of my favorite Marvel horror book — Tomb of Dracula — which was reviewed here last week. Even Marvel can’t seem to summon much enthusiasm for these books, calling Vampire Tales “mildly exciting” in a stab at sarcasm that reads more like unvarnished truth.

I don’t believe I ever read any of these books — while I was a Famous Monsters loyalist, I wasn’t very interested in horror comics as a kid, and the higher cover price of Marvel’s magazines would have scared me off in any case. Any readers with fond memories of Marvel’s black & white horror mag line? Share your thoughts in the comments section, below!

TOMORROW AT LONGBOX GRAVEYARD: Guide To Comic Books On Instagram