Have You Seen This Barbarian?

The numbers are in and it was a first-round knock-out — Conan the Barbarian could muster no better than ten million dollars in its opening weekend. Finishing fourth in what should have been a one-horse race, Conan failed to vanquish two box-office hold-overs and a Spy Kids sequel that wasn’t screened for U.S. critics (and the primary virtue of which is that it smelled like dirty diapers).

Barely a week has passed since the launch of this prospective franchise, and Conan already feels like old news. But the Cimmerian is a favorite here at LongBox Graveyard, so I will give his latest film outing a post-mortem before throwing a spade-full of dirt on the poor brute’s face.

My Conan biases were outlined in last week’s column, but for those arriving late — I love and admire the pulps; enjoy the Roy Thomas run of the comics; dislike Arnold Schwartzenegger‘s movies; and I believe Conan is a more sophisticated character than he first appears.

Yes, I am a true believer, and I turned out with my son Miles and a scant few other believers to see the movie last Saturday. The problems with the picture were legion — the action was largely incoherent, the dialogue lacked snap, the plot was uninvolving, the villains barely rose to the level of a desultory Marvel comics script, and Jason Momoa had bigger tits than his female lead.

But one problem put everything else in the shade. 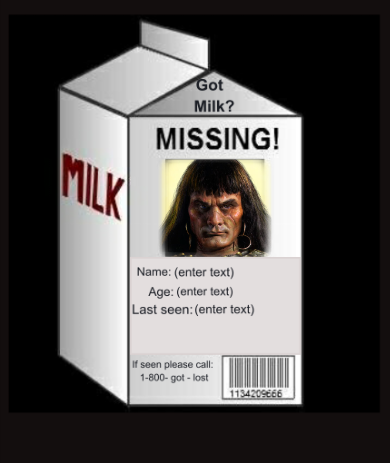 Someone needs to put Conan’s face on a milk carton. I keep going to his movies, but the Conan I know still hasn’t shown up.

Drama is all about the character, never more so than when we are transported to some distant world full of monsters and alien gods. The growling savages, leaping sand demons, topless dancing girls, and writhing snake monsters of Conan the Barbarian haven’t a hope of holding our attention absent believable characters struggling to overcome meaningful internal struggles. It’s a real shame, because the film has decent cast and all the blood, blades, and boobs you need to make a Conan movie … they just whiffed on the “Conan” part!

Since the Barbarian’s screenwriters keep getting the character wrong, I thought I’d offer some pointers about what makes Conan special, and how the character might be better realized on the screen.

CONAN THE LIBRARIAN (Read The Books!)

Job One is to get to the library and read a couple books by Robert E. Howard. He wrote barbarian fantasies about this hero you may have heard about — guy by the name of “Conan,” as in, “Conan the Barbarian.” Howard was no Hemingway but the worst of his original Conan stories are head and shoulders above the hack screenplays that keep getting sold in his name.

Read those tales and you won’t find the One Ring (I mean a squid mask) held secretly by the Elves (I mean the barbarian tribes) to keep it from falling into the hands of Sauron (I mean what’s-his-name with the perfect teeth). Instead of raiding old D&D modules for story ideas as did the screenwriters of Conan the Barbarian, consider adopting some of the better original tales, like “The Phoenix in the Sword,” “Beyond the Black River,” “Red Nails,” or “Queen of the Black Coast.”

CONAN THE REPITITIOUS (Enough With The Revenge Stories!)

To make their hero relateable, the screenwriters of the new Conan the Barbarian spend their first act showing us Conan’s childhood. As was the case in the tiresome 1982 John Milius film, this new Conan is a revenge story, with orphaned Conan remorselessly hunting down the Big Bad who killed his father.

Here’s the problem — Conan doesn’t a shit about his dad.

If Conan thinks about his father at all, it is probably the same way he thinks about Crom — a distant, unfathomable figure who gave him courage and life, then left him to find his own way in an uncaring world. Conan is pragmatic and impulsive and so surrounded by blood and monsters that he knows every day could be his last. He’s an adventurer with a lust to live life to it’s fullest. This is not a man with a plan. The brooding, doomed, revenge-driven storylines now twice handed this character ill suit him (THREE times if you count Arnold mooning over Valeria in Conan the Destroyer. Enough already!)

CONAN THE CONTEMPORARY (Understand The Character)

It seems Conan’s screenwriters can’t get past the cliches to understand the living character at the heart of Robert E. Howard’s tales. There’s so much more to Conan than the grunting, one-note musclemen Hollywood keeps putting in his place. Conan’s writers need to see the Barbarian as a real person before they have a hope of giving him decent things to say and do. Might it help to think of him in present-day terms?

If Conan were alive today, he’d be the buddy you call to help move a couch, play wingman on a trip to Vegas, or help collect a debt. He would be perpetually broke, but he wouldn’t take your money. He’d seem both penniless and he richest man in the world. Jason Momoa’s screen presence hints at some of those qualities — Conan should be a regular guy, only more so. Keep that character in mind as you write Conan’s adventures in the Hyborian Age.

NOT the contemporary Conan I had in mind!

CONAN THE CONTRASTING (Let Conan Stand Out In A Crowd!)

The best way to appreciate Conan is through juxtaposition and contrast, but this newest film makes Conan just one brute among many, distinguished only by his lack of deformities and facial scars. When everyone is a mud-caked savage, it is hard to see Conan as a rustic outsider. He should stand out like a lion in a petting zoo.

But instead of plunging Conan into the civilized heart of darkness at the center of Howard’s Hyborian Age, the screenwriters of Conan the Barbarian (doubtless with one eye on the budget) throw our hero into Bulgarian forests and (worst of all) the mud-hut Cimmerian villages of Conan’s childhood — a place so dull that Howard’s Conan left it at the first opportunity. Put Conan in fish-out-of-water situations where we can see how his barbarism is both a blessing and a curse, and the character and the world will both feel infinitely more interesting and engaging.

Conan is an outsider in his world, unschooled in the ways of civilization. It’s OK to make the character a little innocent and vulnerable. We’ll like him better that way, and we will get on board with Conan when we see he is inherently decent and misunderstood. The present screen Conan is far too comfortable and in command of his world to elicit audience sympathies.

Everyone wants to punch their boss in the mouth. Let Conan do that for us and we will love him for it!

anyone could have seen that coming … except Conan!

Like the screenwriters of this and past Conan films, Robert E. Howard set his barbarian at war with sorcerers determined to enslave the world with their dark magics, but unlike Conan’s filmmakers, Howard understood those villains were metaphors for the corruption and false civility of modern life. Conan’s enemies aren’t the wizards or kings or computer generated monsters that filmmakers throw in his path — Conan’s enemy is anyone who has surrendered their freedom to corrupt authority, or is complicit in injustice, large or small. Conan’s enemy is the boredom and frustration of modern life — the gatekeepers, ribbon clerks, shysters, and con-artists that hide behind the rule of law to stick it to the little guy. Conan’s violent outbursts needs to topple kingdoms and right cosmic wrongs — he should wipe clean the stench of evil like a force of nature.

The bad guy in Conan the Barbarian is intent on becoming a god and destroying the world, but his inevitable death at Conan’s hands didn’t seem to have any meaningful impact on the world. Raise the stakes! When Conan kills the Big Bad it should be like blowing up the Death Star. In Conan the Barbarian, he just knocked a dude off a bridge. 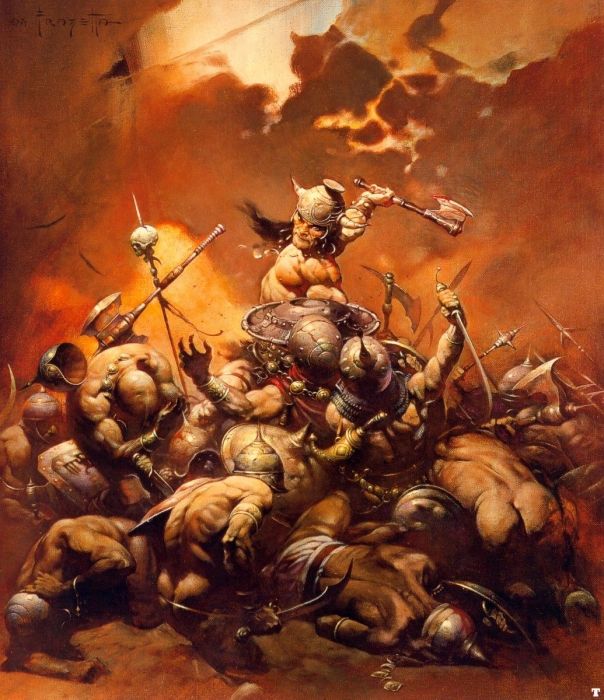 Jason Momoa’sConan is impossibly powerful, strong, and handsome, but without flaws or foolishness there’s no place for the character to grow. We watch Conan have an adventure, but we don’t go on an adventure with him, because he is obviously so in control of the movie that there’s no room for the audience to join him. Worse, Conan’s interior world is so ill-developed that meaningful character change is impossible.

Aside from weakly coming to terms with guilt over his father’s death, our new Conan has no character arc. He’s the same guy in the final scene as his first (and neither is there a change in his world). There are no stakes, no journey, no beliefs that are challenged, no character changes, and no point to his story.

Howard’s Conan begins his life as a penniless adventure and winds up crowned a king, along the way becoming a thief, soldier, pirate, and mercenary — that character is constantly growing and changing. Let cinematic Conan grow on screen, and the audience will grow with him.

Conan is not unaffected by his world

There’s a scene about a third of the way into Conan the Barbarian where Conan’s pirate pal describes what Conan is really all about — that he looks like a savage, but that he has the heart of a king, that he’s loyal to his friends like a bloodhound, and that unlike civilized men, he does not sacrifice his children to gods or enslave his fellow man. That’s Conan, and it’s encouraging the screenwriters knew him that well enough to write that dialogue!

If they had remembered Screenwriting 101 and shown us that character, instead of telling us about him, we might have had a decent Conan picture, about an adventurer we could believe in and cheer for and watch grow wise before our eyes.

Instead, Conan the Barbarian is a tedious, seen-it-before, violent fantasy spectacle long on cliches and short on character, which means two things.

First, I wasted my money taking my lad to see the picture last week.

Second … the clock is now running on the next Conan reboot! Check back here at LongBox Graveyard in 2021 for my review … and if you do see that barbarian on the milk carton, tell him to get out to Hollywood and split some skulls! They’re making a fool out of him out there!