“Hate” may be too strong a word, but I was going through the Captain America comics in The Accumulation … and God Bless America, what a pile of crap!

In the Bronze Age, at least, Captain America (or “Cap,” to his pals) was at his best in books other than his own. Bring Cap on stage just long enough to shout “Avengers Assemble!”, toss his shield into a pile of mooks, and make some patriotic allusion to Bunker Hill, and Captain America was great! Grind it out twenty-odd pages a month with Cap carping about how he couldn’t save Bucky and sweating over his freelance artist career and … eh, not so much.

Captain America — immortal symbol, vacuous character. American Dream or Ugly American? The answer is both or neither, depending on your decade. The 1970-1985 era that forms the bulk of the Longbox Graveyard collection were lean times for Captain America. If you want to read decent Cap stories, you have to adjust your Wayback Machine by plus or minus twenty years.

Circa 1974, though, I was stuck with the Captain America I could find at the newsstand, and because I loved the character I still have a pile of old Cap books. Few have made it from The Accumulation to the Collection. I am keeping Captain America #177, as it is the first comic I ever bought, but it’s part of a badly dated storyline where Cap has given up his identity in a fit of Watergate angst, and I’m not interested in the rest of the run. 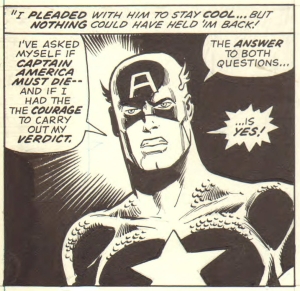 I’m keeping several issues from Jack Kirby‘s return to the book in 1976-1977 (and filling in blanks with moderately-priced back-issues), but that is a pure nostalgia play, and to be honest I didn’t much like that run when I read it at age fourteen — Kirby was corny and I hadn’t developed the eye or the ear to appreciate his idiosyncratic brand of four-color mayhem. I’ve also rescued a brief John Byrne run from #247-#255 that isn’t especially distinguished except when compared to the absolute dreck that plagued this book in the seventies and eighties.

For a normal review here at Longbox Graveyard, I’d read my rescued issues, assign them a letter grade, and meticulously obsess over some tangential issue in the form of a “review.” While I might do that in the future with these books, I haven’t had time to do it yet. But with the Captain America movie out this week, I have a rare chance to be topical with this blog, so in the interest of pointing my regular readers toward the “good stuff” (and as an unsolicited benefit for the degenerate audience I linkbaited with the promise of seeing CHRIS EVANS NAKED!), in reverse order I offer my …

Actually I don’t suggest you buy this at all. It’s expensive even when you can find it, and 1940s-era strips are strictly for completists and historians (and if you find an original Golden Age Captain America comic in a garage sale some place, it’s worthless — mail it to me and I will destroy it for you). But you have to start these lists someplace, so this one gets to lead off. Enjoy the cover image of Cap punching Hitler, then go read The Amazing Adventures of Kavalier & Clay to understand why it was so important.

This volume collects some of the Captain America comics I actually own, and it is a goofball run indeed, with Jack Kirby run amok during his return to Marvel, enjoying unfettered control of the character he helped to create in a series of stories that are totally out-of-step with the rest of the Marvel line in 1976-1977. It really is like these books come from a different planet — Madbombs, Kill-Derbys, Night People, monsters and Bio-Fanatics. It’s second-rate Kirby but that makes it first-rate fun if you don’t require a serious help of Seriousness to enjoy your funnybooks. Just go with it. 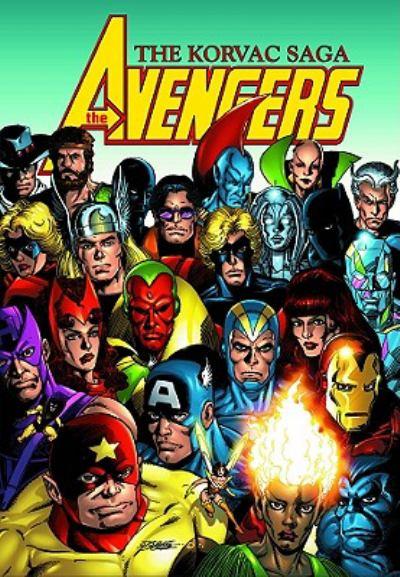 This is kind of a cheat, but if you want to see Captain America at his best in the 1970s, you have to read him in the Avengers. The Korvac story isn’t my favorite Avengers run, but it gets the nod for featuring at least a few issues of art from George Perez, who was the definitive Avengers artist of the 1970s (and he drew a good-looking Cap). For 1970s Avengers Cap I prefer Avengers #160-166 (where we get John Byrne in addition to George Perez) but those issues don’t appear to have been collected anywhere, so this Korvac story will have to serve.

These are the classic Silver Age Marvel stories — primarily by Stan Lee and Jack Kirby — that bring Cap into the Marvel Universe following the character’s reintroduction in the pages of the Avengers. As Lee and Kirby stories go, they are definitely inferior to Fantastic Four and probably not as good as Thor, but there’s still plenty of good reading here, and in this run you get all the classic bits of the Captain America mythos — Red Skull, S.H.I.E.L.D., Sleepers, The Cosmic Cube, the works. Don’t try to read more than three or four issues in a single sitting or you will lose your mind. You also get the brief-but-iconic Jim Steranko run here.

Keep in mind this Silver Age volume is distinct from the top entry on my list, despite having a near-identical title …

It’s hard for a Bronze Age geezer like me to admit it, but these confounded modern comics are the ones to read if you want the best Captain America out there. After jerking around with the character through a series of reboots and restarts (you’ll notice I don’t recommend anything from volumes 2-4 of this series), Marvel gets it right by handing the reins to crime fiction comics writer Ed Brubaker and just getting out the way as Brubaker mines Cap’s rich past with a series of stories that are modern, fast-paced, and brilliantly told. There’s a bit of backstory to sort through here but it’s not as bad as most modern books and I’ll bet a first time reader can jump in with only a minimum of disorientation. This run is also available as a series of shorter and cheaper trade paperbacks, but you will want them all, so get this nice Omnibus edition … and prepare to keep paying for collections, too, as Mr. Brubaker’s tenure on Cap runs for fifty more issues past this volume.